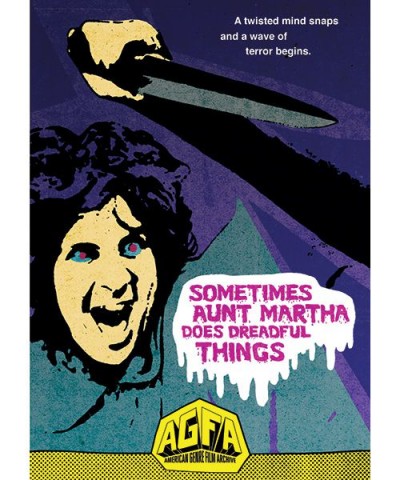 Two men on the run take up residence in a house as one of them poses as his Aunt Martha to evade detection by the police, going so far as to wear a wig and female clothes. A series of strange events transpire that threatens to expose their identities.

The charmingly-titled Sometimes Aunt Martha Does Dreadful Things is a low-budget feature shot in Davie, FL just outside of Hollywood circa 1970 shot on a shoestring of what looks like $50.00. I can only imagine that this film played on a double feature at drive-ins with some other ungodly cinematic disaster. In 2012 Aunt Martha screened at the The Media Club in Vancouver, British Columbia in Canada on a double-bill with Charles Kaufman’s infamous Mother’s Day (1980), just before Mother’s Day weekend! 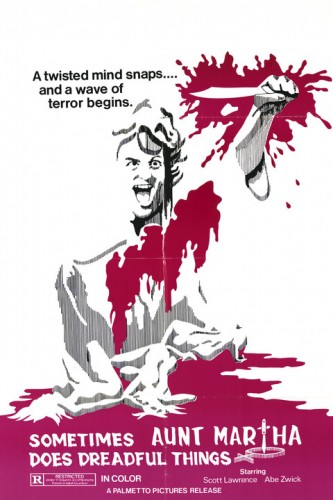 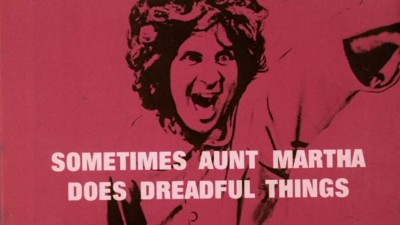 Aunt Martha looks like what might have happened at the end of Dog Day Afternoon (1975) if Sonny Wortzik decided to run off with his cross-dressing lover Leon Shermer and commit murders, then try to stay off the radar. The movie is so off-the-wall that one wonders if the crew was even operating from a finished script. The titular character, played by an actor named Abe Swick (where is this man today?), is an exercise in contradictions. One minute he looks like he’s donning female clothes for purposes of disguise – he actually looks like Lena Dunham when we first see him – the next moment he’s behaving like a transvestite. 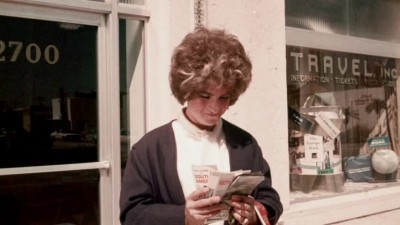 His partner Stanley (Wayne Crawford, here credited under the name of Scott Laurence) is a lunatic who falls asleep at the most inopportune moments, especially when two attractive young women strip nude and try to have sex with him. He freaks out as though Jared Fogle were trying to rape him – though given the proclivities of the characters in this film, Stanley might welcome that, even if he isn’t six years-old. 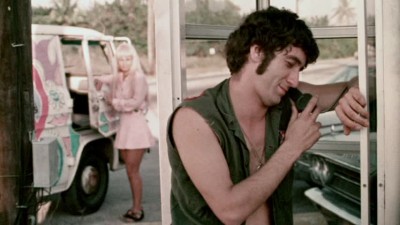 It’s a bizarre story that really doesn’t know what it is and cannot make up its mind as to what it should be, and lot of the dialog sounds looped. On the one hand, it’s sold as a horror film and on the other it looks like a crime story. There is some violence and bloodshed, but nothing on a par with Herschell Gordon Lewis. All in all, it’s just out right bizarre. 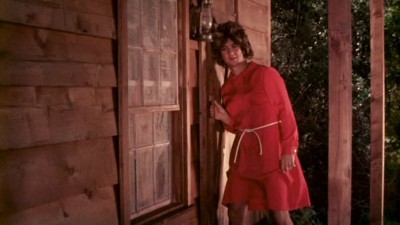 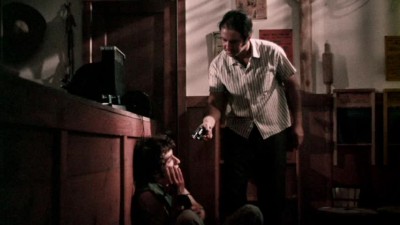 Wayne Crawford did some other acting gigs but he also produced movies, most notably Valley Girl (1982) and the cult favorite Night of the Comet (1984). Aunt Martha’s closest cinematic brethren is John Waters. What does make this movie worth owning is the running commentary with film director and former projectionist David DeCoteau (www.rapidheart.com) and Nathaniel Thompson of www.Mondo-Digital.com, the latter of whom remarks that the film was released on VHS at least twice (I never saw it at any video store that I frequented, as far as I can recall). This is one of the most entertaining, informative, and enjoyable commentaries that I’ve ever listened to. I liked it so much, in fact, that I hated to hear it end! They should have continued their commentary on another audio track! Being a film projectionist in the 1970’s was unquestionably one of the best jobs that a movie lover could have, and Mr. DeCoteau garnered a lot of his film knowledge from his experiences in this position. Mr. Thompson is a fountain of knowledge and his website is a treat to peruse as it sports thousands of film reviews.

According to the commentary, the film was shot in the long defunct Shipley Studios which is where they shot a lot of Tarzan movies. There was an attempt in the 1970s to make Florida a bustling East Coast film center. Unfortunately, that never took off.

Vinegar Syndrome pulls off another great release, as the original negative could not be located and may be lost. Supposedly the DVD has been mastered from the only known surviving 35mm print of the film, which, despite some moments of expected color changes with spots, is in fairly good shape.