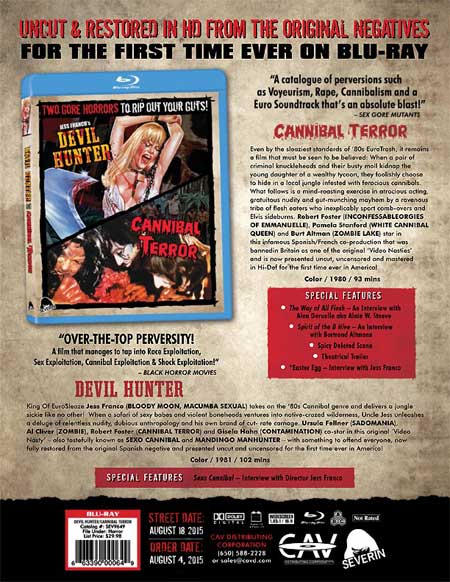 CANNIBAL TERROR- Even by the sleaziest standards of ’80s EuroTrash, it remains a film that must be seen to be believed: When a pair of criminal knuckleheads and their busty moll kidnap the young daughter of a wealthy tycoon, they foolishly choose to hide in a local jungle infested with ferocious cannibals. What follows is a mind-roasting exercise in atrocious acting, gratuitous nudity and gut-munching mayhem by a ravenous tribe of flesh eaters who inexplicably sport comb-overs and Elvis sideburns. Robert Foster (Inconfessable Orgies Of Emmanuelle), Pamela Stanford (White Cannibal Queen) and Burt Altman (Zombie Lake) star in this infamous Spanish/French co-production that was banned in Britain as one of the original “Video Nasties” and is now presented uncut, uncensored and mastered in Hi-Def for the first time ever in America!

DEVIL HUNTER- King Of EuroSleaze Jess Franco (Bloody Moon, Macumba Sexual) takes on the ’80s Cannibal genre and delivers a jungle sickie like no other! When a safari of sexy babes and violent boneheads ventures into native-crazed wilderness, Uncle Jess unleashes a deluge of relentless nudity, dubious anthropology and his own brand of cut-rate carnage. Ursula Fellner (Sadomania), Al Cliver (Zombie), Robert Foster (Cannibal Terror) and Gisela Hahn (Contamination) co-star in this original “Video Nasty” — also tastefully known as Sexo Cannibal and Mandingo Manhunter — with something to offend everyone, now fully restored from the original Spanish negative and presented uncut and uncensored for the first time ever in America! 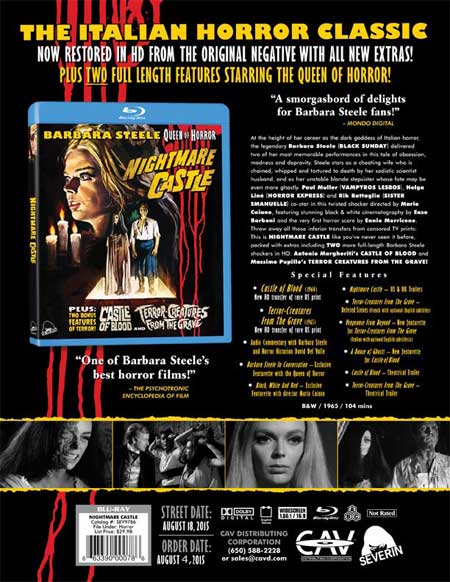 At the height of her career as the dark goddess of Italian horror, the legendary Barbara Steele (BLACK SUNDAY) delivered two of her most memorable performances in this tale of obsession, madness and depravity. Steele stars as a cheating wife who is chained, whipped and tortured to death by her sadistic scientist husband, and as her unstable blonde stepsister whose fate may be even more ghastly. Paul Muller (VAMPYROS LESBOS), Helga Line (HORROR EXPRESS) and Rik Battaglia (SISTER EMANUELLE) co-star in this twisted shocker directed by Mario Caiano, featuring stunning black & white cinematography by Enzo Barboni and the very first horror score by Ennio Morricone. Throw away all those inferior transfers from censored TV prints: This is NIGHTMARE CASTLE like you’ve never seen it before! 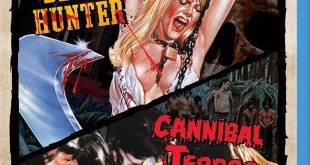