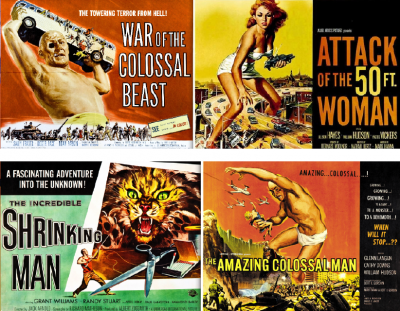 Possibly the most interesting science fiction film of 1957 was Jack Arnold‘s The Incredible Shrinking Man (1957). After passing through a radioactive cloud while on a motor boat, combined with later exposure to dangerous pesticides, the man begins to decrease in size, slowly at first, and then much faster. By the time he’s a mere three feet tall it’s become obvious to both his wife and himself that things are never going to be the same. Believing that the shrinking has stopped, he strikes up a relationship with an attractive midget girl he meets in a park, but the affair comes to an end when he realises that he is growing still smaller. 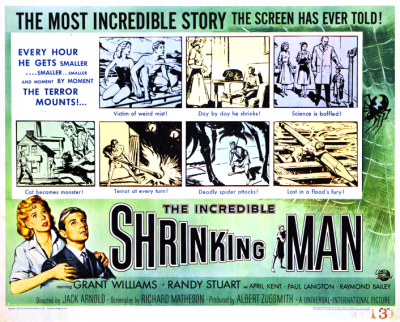 Reduced to living in a doll house he makes a brave attempt at coming to terms with things but suffers a further disaster when his pet cat, which gets into the room while his wife is out shopping, attacks the doll house and attempts to eat him. Fleeing the cat he falls down the steps into the cellar and enters a whole new world of nightmares were a leaking boiler seems like Niagara Falls and an ordinary spider is the size of a Volkswagen. He finally overcomes all the threats to his survival but still continues to shrink, and we last see him preparing to leave the cellar (he is now small enough to pass through a fly-screened window) and into the garden. “To God there is no zero. I still exist!” we hear him say as he seems to disappear completely. 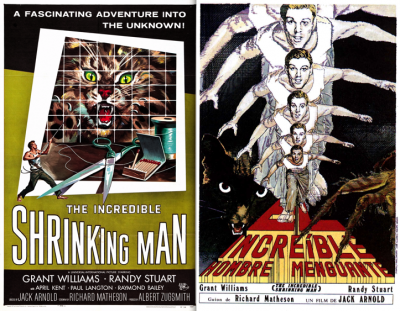 Scientifically it’s nonsense (it ignores the problems with mass, for instance), but it is still good science fiction because its central protagonist undergoes a science-related experience which fundamentally alters his perception of the universe. It is also a multi-layered film, its underlying theme being not so much concerned with the physical problems of a man who shrinks, but with the basic psychological fears that his bizarre situation stands as metaphor, such as the fear of ceasing to exist as a separate entity, of dying, and of sexual inadequacy. The shrinking man first becomes as a child compared to his adult-sized wife, then reaches the point where he is kept by her in a doll house, possibly the ultimate sexual humiliation.

Basically the film is an exercise in paranoia in that it concerns a man who realises that all his familiar and comfortable surroundings, including his wife and neighbours, are becoming increasingly threatening, that his world is not the safe place it seemed but one of pure nightmare. The author of the book on which the film was based and the screenplay itself was the prolific Richard Matheson, a writer who has based his career on exploring aspects of paranoia. His novel I Am Legend, which has been filmed at least three times, is possibly the ultimate paranoia story, though his script for Steven Spielberg’s Duel (1971) comes a close second. On the technical level the film was also above-average with intelligent direction by Jack Arnold, fairly convincing special effects by Clifford Stine (the mattes, forced perspective and split-screens are very good), and the cast deliver capable performances, especially Grant Williams as the shrinking man and Randy Stuart as his wife. 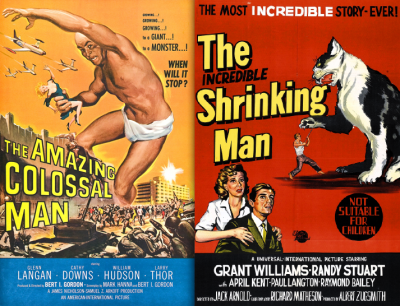 The success of The Incredible Shrinking Man produced the inevitable cheap imitations, one of the first being The Amazing Colossal Man (1957) produced and directed the same year by Bert I. Gordon aka Mister BIG, a filmmaker so determinedly crass in his work that he makes Roger Corman look like the genius many people say he is. Bert enjoyed a comeback in the seventies and did his best to destroy the reputation of my old friend H.G. Wells with such films as Food Of The Gods (1976) and Empire Of The Ants (1977). Glenn Langan starred as an army officer who is caught in yet another atomic explosion which causes him to grow into a giant. Unfortunately his heart is growing at a slower rate, so like The Grinch Who Stole Christmas, his heart becomes two sizes too small. Unable to cope, he goes insane and starts on a rampage of destruction, demolishing cardboard buildings and equally cardboard characters before being destroyed himself. The clumsy special effects were also the work of Mister BIG. 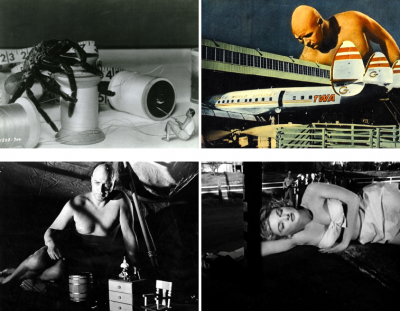 Even worse was Attack Of The Fifty Foot Woman (1958) made the following year by Allied Artists and directed by Nathan Juran (who had himself credited as Nathan Hertz) from a screenplay by Mark Hanna, who had also written The Amazing Colossal Man. Allison Haynes, whose first leading role was opposite Francis The Talking Mule (1954), starred as Nancy Archer, the woman who sees a flying saucer land in the desert shortly after she has been released from an insane asylum. Unwisely, she attempts to tell police and then her husband, but of course no-one believes her. Her husband, however, is pleased by this evidence of continuing insanity because it will enable him to have her re-committed and thereby leave him free to carry on his affair with Honey Parker (Yvette Vickers). But before the men in the white coats arrive, Nancy flees into the desert where she encounters a monster from outer space, who promptly zaps her with a mysterious ray which turns her into the fifty-foot woman of the title. Eager for revenge on her two-timing husband she returns to town and starts demolishing houses in her efforts to locate him, prompting the following dialogue: “She’ll tear up the whole town until she finds Harry!” – “Yeah, and then she’ll tear up Harry!” 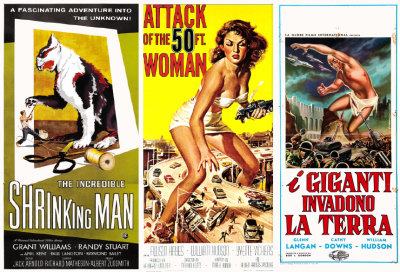 With its low budget (the movie was made for around US$88,000) Attack Of The Fifty Foot Woman made enough money to prompt discussion of a sequel. According to producer Jacques Marquette, the sequel was to be produced at a higher budget, and in colour. A script was also written, though the project never advanced beyond the discussion phase. In the mid-eighties, filmmaker Jim Wynorski was considering a remake of the 1958 movie, with Sybil Danning in the title role. Jim made it as far as shooting a photo session with Sybil dressed as the titular Fifty Foot Woman but again, the project never materialised, as Jim opted to film the 1988 remake of Not Of This Earth (1957) instead.

The film was finally remade as a big-budget HBO movie, Attack Of The Fifty Foot Woman (1983). The film, directed by Christopher Guest with a script by Thirtysomething scribe Joseph Doherty, starred Daryl Hannah in the title role. But that’s another story for another time. So please join me next week when I have the opportunity to present you with more unthinkable realities and unbelievable factoids of the darkest days of cinema, exposing the most daring shriek-and-shudder shock sensations to ever be found in the steaming cesspit known as…Horror News! Toodles!