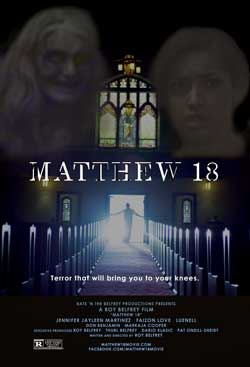 The story centers around the subject of African American culture, what goes on in the grassroots of the church community and even within the households and fabric of the culture. The film, explores the spiritual world as it impacts the natural world.

You gotta feel for young people, always having to deal with the sins of the past. Jeez, you’d think their ancestors would behave themselves. Fortunately for us though, they never do and as a result we get horror movies like Matthew 18. Yes, as in the Holy Bible’s Matthew. And yes, we even get the passage displayed on the screen in the beginning.

“Again, I say unto you, that if two of you shall agree on earth as touching any thing that they shall ask, it shall be done for them of my Father which is in heaven. For where two or three are gathered together in my name, there am I in the middle of them.” 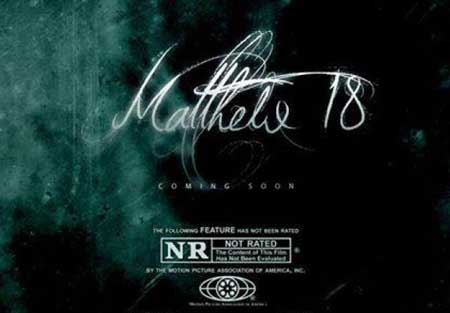 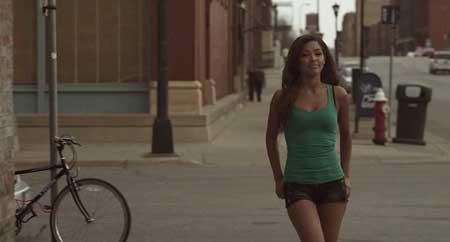 Okay, pretty cool opener. Combine that with a decent opening kill (the sound effects for it are superb) and it looks like we’ve got ourselves the start to a darn good horror movie. That is until we get to hear some of the dialogue. To be fair, it isn’t so much the writing, well maybe some of it, but the actors are more to blame as their delivery seems straightforward. Dry. There are exceptions to this so let’s not jump to any conclusions yet.

It isn’t long before we meet our heroine, Michelle (played by the lovely Jennifer Jayleen Martinez). She’s one smart gal who’s been accepted to every pre-med program she’s applied for. But there’s only one that has offered her a full, four year scholarship: the University of Minnesota. So much to her mother’s chagrin, it’s off to college. But not before a going away party is held, which somehow quickly turns into a philosophy debate on science vs. religion. No wonder Michelle wants to get out of there a.s.a.p.

Lucky for her there is a house where she can stay rent free, she just has to pay the utilities. Never mind that it’s cheap (bad sign number one), that it’s been in the family for years (bad sign number two) or that the family shares the property with a crazy old woman (bad sign number three). Michelle may be book smart, but she obviously hasn’t seen many horror movies. So it shouldn’t come as any surprise that once she arrives and settles in, things don’t go quite as expected. 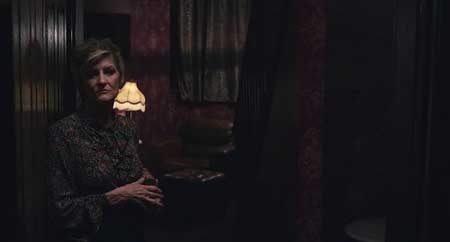 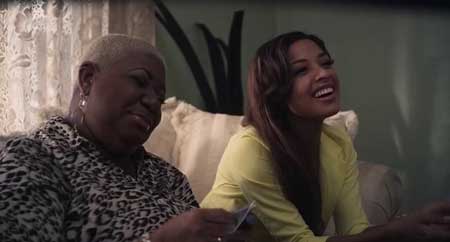 Matthew 18, despite having a pretty good underlying structure, just can’t come together enough to rise above it and shine. It can be frustrating. As mentioned above, the acting doesn’t help matters. Jennifer Jayleen Martinez stands out as Michelle, the pre-med student who doesn’t believe in ghosts. As for the others, hit and miss. One of her housemates, Lifton, gets some funny lines.

Part of the problem, oddly, is that there can be too much dialogue at times. Lots of discussion about ghostly things. Talk of the spirit world. Of death and when it’s your time, it’s your time. A few more quiet scenes filled with tension as the camera finds old, dusty nooks and crannies would have gone a long way. 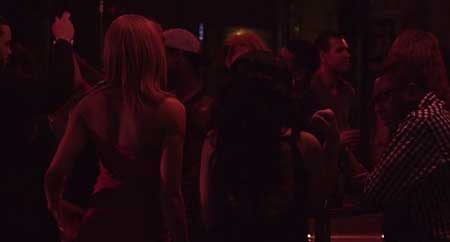 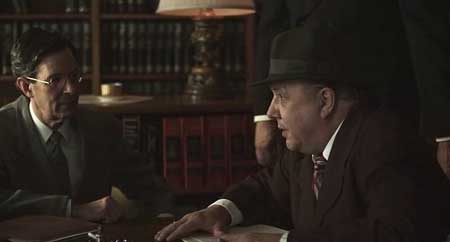 Don’t worry, there are some of those scenes, and when they appear they aren’t all that bad. One memorable scene with a knife and a hand comes to mind, and it’s one of the best in the film. Very well done. Writer and director Roy Belfrey does a good job with the angles and using the house for some cool shots. To that end, kudos should be given to the house. Large, old and creepy.

But is it really worth watching? Tough call. For a cheap rental I’d say yes, but you’re gonna have to listen to some stilted dialogue. Plus, it seems about ten minutes longer than it needs to be. Fans of haunted house movies will find things to like, but not love. That I guess is the key difference.