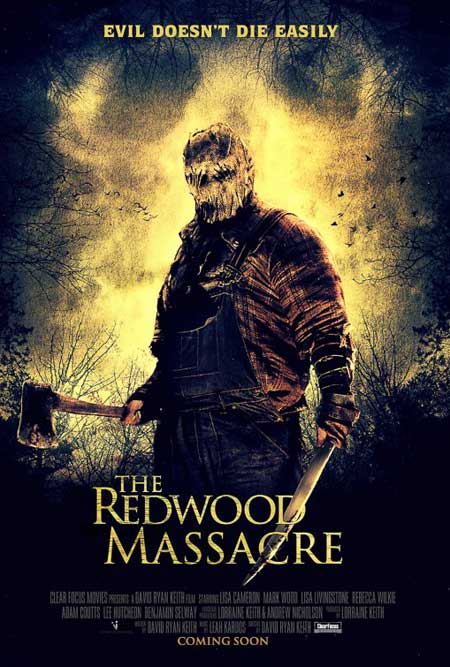 A group of friends on a camping trip are terrorized by a masked killer brandishing an axe.

As most of you know I love slasher flicks. While I have a special place in my heart for the ones that came out in the 80’s I also like some of the newer ones that have been made over the last couple of years. I was pretty excited about seeing The Redwood Massacre as I thought that it sounded like it could be awesome, but unfortunately I found out otherwise just a few minutes into watching it. I really wanted to like it but I just couldn’t. It has a paper-thin, unoriginal premise, atrocious acting, and the most unlikeable group of characters I’ve seen in a very long time (to the point that I couldn’t wait for the killer-who is quite lame in his own right-to chop them to pieces so I wouldn’t have to look at them any more). Needless to say I didn’t have a very good time while I was watching this movie and I seriously doubt that anyone else will either.

The Redwood Massacre is painfully unoriginal. Essentially the plot revolves around a group of people camping in the woods near the location of a horrible murder took place years ago. Of course the person that was responsible for the murder (a possessed farmer that killed his wife and daughter with an axe) suddenly shows up wearing a scarecrow mask and starts taking out the group of friends one-by-one (sounds pretty familiar, huh?). I’ll admit that most slasher flicks aren’t that original but this one seems to go out of its way to through any originality out of the window. There are things in this movie that we have seen literally thousands of times before and is so full of tired, slasher movie clichés that it isn’t even funny. It is so by-the-numbers that I knew exactly what was going to happen before it happened and there is absolutely nothing new that takes place here. If you’re looking for a movie that reinvents the slasher genre and throws in a couple of surprises that you didn’t see coming you are going to be sorely disappointed if you watch this movie as it doesn’t bring anything remotely new to the table. If you’ve ever seen any movie about a masked murderer taking out a bunch of people in the woods then you have already seen The Redwood Massacre in all honesty.

I also thought that the characters were horrible. The male characters are basically interchangeable and there is nothing about them that stands out. The female characters are equally bad as we have the bitch, the final girl (who is just sort of there and doesn’t really have any personality), the final girl’s best friend (who has some of the weirdest-looking eyebrows I have ever seen in my life), and some random people who just happen to wander into the woods to get killed (I still have no clue who the chick at the beginning that is hacked to bits by the killer was supposed to be). Most of the characters are mighty annoying (especially the bitch character) and they spend most of the time sitting in the woods bickering before they are killed off. To make matters worse none of the people playing the characters can act and it appears as though most of them are reading their lines off of cue cards or something. There isn’t a single person in the film who puts any emotion into his or her performance and the biggest majority of them seem to want to be somewhere else (like in a better movie). Even the killer (who doesn’t have any lines aside from a very annoying laugh during a flashback scene after he is possessed) is a lousy actor and tries his best to be Michael Myers but fails miserably. I don’t think that I liked a single character in the entire movie and can’t remember the last time I saw such terrible acting in a movie.

Even the death scenes are pretty bad in this movie. The first several are exactly the same (the killer knocks someone down and then hits them in the small of the back with an axe over and over again) and once he moves on to something different it isn’t anything special. I was hoping that as bad as the movie was that we would at least get a couple of cool, creative death scenes but it just wasn’t to be. The killer doesn’t have any imagination when it comes to taking out his victims and the results are pretty dull and boring. While most of the kills are bloody as hell they just aren’t that interesting and seem more than a little phoned in to me. I mean come on now; couldn’t they have at least throw one good, fun death scene into the mix to keep the entire film from being a complete waste of time? Apparently not. 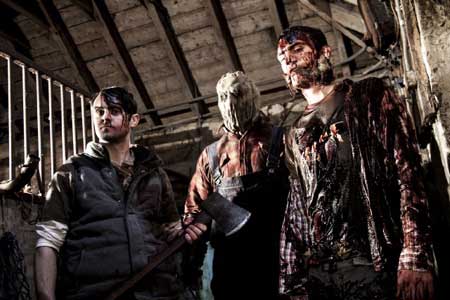 I don’t think that there is any way that The Redwood Massacre is going to go down in history as a classic slasher flick in 50 years or so. It’s pretty bad and I just didn’t enjoy it at all. It isn’t scary (with the exception of that one chick’s tattooed on eyebrows that made her look like Uncle Leo from that one episode of Seinfeld where his eyebrows are drawn on with a marker), isn’t a whole lot of fun, and just isn’t that interesting in general. Like I said earlier in my review, I really wanted to like it but I just couldn’t. I can’t really recommend this one so you would be better off by skipping it as you aren’t really missing anything special by not checking it out.