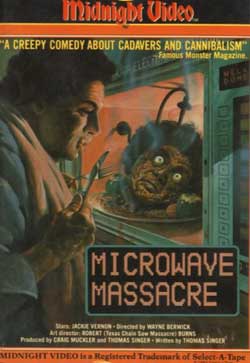 A guy kills his wife because she’s a bad cook.

There are few film sub-genres that disappoint as often as the horror/comedy. While a few might succeed, the majority fall flat. Rarely, however, are they capable of being bad while potentially ruining childhood memories. Microwave Massacre is one such film.

Producers originally wanted Rodney Dangerfield for the role but the story goes that he wanted too much money. I prefer to think that “Hot Rod” knew a real stinker when he read one. Failing to secure Rodney, the producers turned to another comedian, Jackie Vernon. Vernon was once an acclaimed comic but, by the mid-70’s, his career was mostly over. By the time he was cast in the role of Donald, he was no longer relevant in the comedy field and his deadpan everyman shtick was dated and passé. “Fortunately”, the director had him use it anyways… for old time’s sake. Of course, old, tired, and unfunny comedy is the route this film takes, so he fits right in. 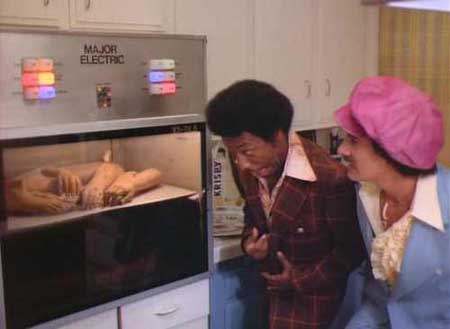 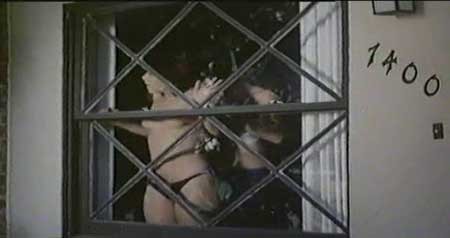 The opening credits of the movie are straight out of a 70’s era P*rno. Tightly clad breasts wiggling as the woman walks down the street and appropriate “chikka-wah-wah” music plays. The aptly named (and amply endowed) “knothole girl” ends up pressing her bare breasts through the fence of a construction site while apparently being taken from behind by a stranger. Classy right? Amazingly, despite her willingness to get topless, “actress” Marla Simon was never seen on screen again. Not the best way to start a career, but a good way to end one. There is quite a bit of that in this movie (at least 10 other aborted careers).

The bad titillation sequence is followed with an equally bad sight gag. Donald, the lead character, pulls a comically oversized sandwich from his lunch pail and, opening it, removes an entire crab. Of course, this is one of those gigantic, plastic, novelty crabs, but for the sake of the joke we are to assume that it is real. Of course we get the requisite joke about not wanting crabs. Hilarious. 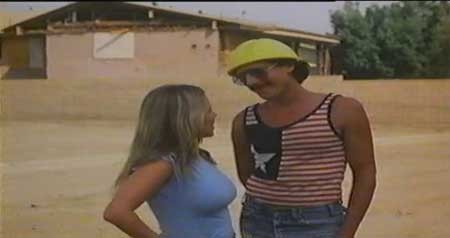 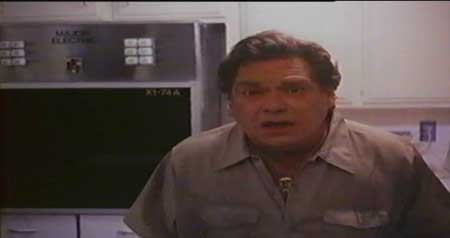 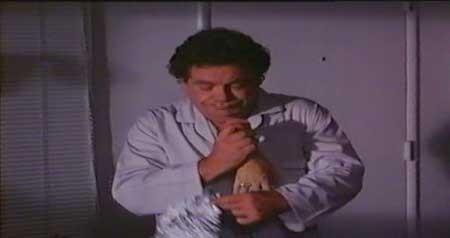 If one can get past all the technical gaffes such as boom mikes in frame (complete with the entirety of the boom) or crewmembers in the shot, one begins to get the idea that the people making this movie really didn’t care. Things are obviously shot in a single take, ignoring major mistakes such as those or nearby police sirens drowning out dialogue. Through it all, the film’s cast merely soldiers on in what plays out as the Bataan Death March of comedy.

As the story progresses one feels more and more that the story takes place within the world of a 70’s P*rn, and that everyone but Donald is in on the action. His neighbors are having a wild three-way sex party, hookers are everywhere, there is sex on the construction site… and Donald goes home to his nagging wife who is trying to fix him fine “Q-zine”.

Donald’s shrieking harridan of a wife May is played by the utterly forgettable Claire Ginsberg. Hers was another career that was, thankfully, cut short by this movie. May’s behavior makes that of Blanche Bickerson look positively loving and rational. So, when she is murdered? We just don’t care. Indeed, even Jackie Vernon doesn’t seem to care, pausing to look at the camera and shrug, as if to say “what are you going to do” before carrying out the deed. The killing takes place while the camera is almost entirely focused on Donald’s face. There is no attempt at gore here, or even horror. Just a matter of fact murder that the hung over Donald doesn’t remember in the morning when he finds his wife sitting upright in the gigantic microwave (that is still too small for her to be sitting upright in). He nonchalantly sets the microwave to “slow broil” and goes to work. 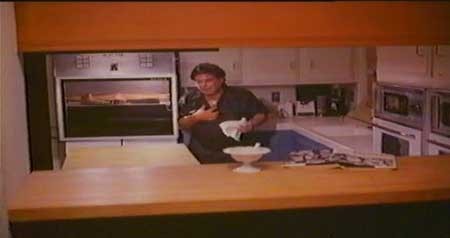 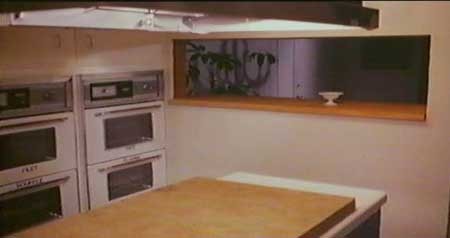 Yup, he has no reaction to his wife’s death. She just had it coming for her bad cooking and so he cooks her. Returning from work he simply chops her up and puts her in the refrigerator before sitting down to watch a true-crime drama (the audio of which is played in a lackluster attempt for laughs). Predictably, he accidentally eats some of his dead wife and finds it tasty. Even more predictably, he takes a giant hoagie made of his wife to work and his co-workers like it too. This opens the door for all sorts of cannibalism jokes through the movie: complaints about meat that is tough and old, Peking chick, and the sad “dark meat” joke.

There are a few “blink and you’ll miss it” moments that left me a bit incredulous. Both of them are uncredited cameos. In the best known, Paul “Pee Wee” Ruebens appears at the end of the movie to deliver a single one-liner. The other was a real head scratcher (literally). In one scene a homeless man finds May’s other arm in the trash. He pulls it out and uses it to scratch his crotch and then his back. That uncredited homeless man is none other than Robert Burns, art director for such films as the Texas Chainsaw Massacre, the Howling, Re-Animator, the Hills Have Eyes, and many others. It is a small insider payoff for having endured such a horrible movie. 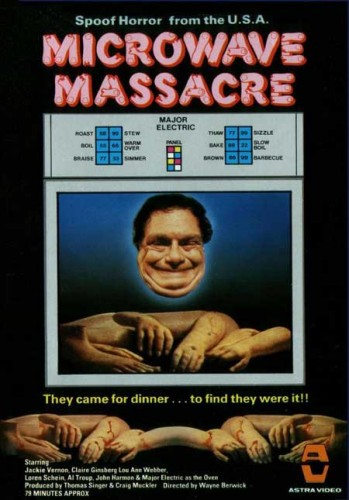 The cast of major characters are all unlikeable. The minor characters that appear are all bad gags, whether a woman dressed as a chicken to allow for a bad KFC joke, or a doctor who cannot even locate the human heart, or worse. They all come off as attempting to distract the viewer from the fact that there really is no movie here. It is more a collection of bad (sometimes racist) humor blended with a casual attitude towards sexual assault only found in early 70’s P*rn.

Finally, mercifully, the movie finally ends. It does so suddenly and with no real sense of resolution. Still, for those who have made it this far, none is really needed…just a cessation of suffering is enough. It is at this point that the oddest thing happens. The movie actually gets a bit clever WITH THE CREDITS!

Yes, you read that right, the writing for the credits actually is funnier than the entire movie that has been endured up to this point. They aren’t belly-laugh funny, but there is a cleverness and a wit there that is absent from the entire movie. Referring to each victim as a cookbook themed dish and building on that is rather clever. A small payoff for such an atrocious seventy plus minutes, but at least it is something. It is enough to lay waste to its claim of being the worst horror movie ever, as there is this slim redeeming quality.

As for how this movie potentially can ruin childhood memories (you didn’t think I’d forgotten about that had you)? Let me go back to our main character Donald, who murders, gropes, humps, and eats his way through the movie. Donald, the very same character that is played by Jackie Vernon in what was to be his last movie role. Well , there is another role for which Jackie Vernon is far better known. He was the voice of Frosty the Snowman. “Hap-py Birthday” children.

One half out of five stars (but only because of the credits).