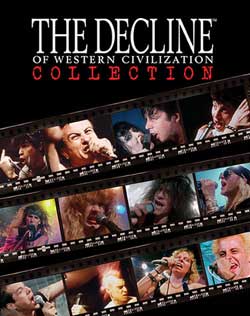 The entire series consists of 3 releases that were filmed over the course of 2 years (1979-1980). This documentary film series that has been well known in music circles for quite some time (as one of the front runners of documentary-style television) comes to us under the creative direction of Penelope Spheeris. It one of those films that only gets better with time as the music circles move into new directions.

Each film runs (give or take) about 90 minutes. The second release “The Decline of Western Civilization Part II: The Metal Years ” remains one of the more noted documentaries of the heavy metal scene during that era (and for good reason). The first film covers the aspects of the L.A punk scene with the 3rd taking on what is referred to a “gutter-punk” style centering on homeless teenagers. 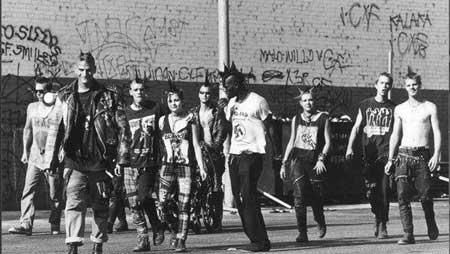 The series (for its time) was perceived as shocking, groundbreaking and edgy from a previous era when we weren’t as acclimated as we are now to the runs of behind the scenes inclusions, VH1 specials and reality television overloading. As a participant of that era, I was just excited to see some of my favorite bands presented in digital format in home viewing.

Despite which of the 3 films you are more inclined to…..Decline of the Western Civilization films were well-regarded for many years. The lack of releases made them harder to acquire especially in  later years (aka bluray to the rescue!)

“That era” has now resurfaced with the reintroduction of all 3 films combined under 1 box set released by shout Factory. The bluray is the way to go offering tons of extra tidbits. Noted in the PR on this title, the scan has been re-scanned into a 2K presentation of the films making them truly worthy of high definition. 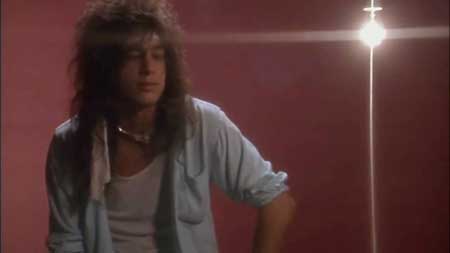 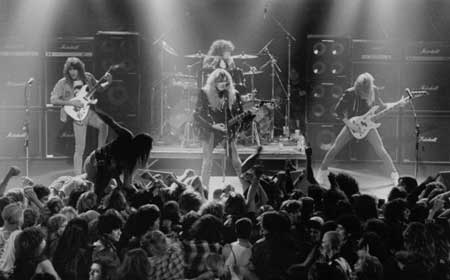 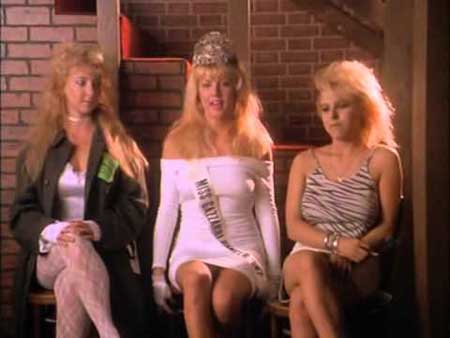 “Decline of the Western Civilization” is a multi session project that is undoubted worth the time for viewing. Though with that said ….not always for the reasons you would expect. Each session holds it own suitable amount of reality-cam style absurdity. The punk era does a bang up job of covering a few up and coming punk acts (though many of them are unknowns who never really amounted to much). This didn’t surprise me as I often scratched my head in disbelief that some of these acts who couldn’t play a note, couldn’t sing and wrote the most indecipherable lyrics were able to draw any sort of crowd to support them. The punk era is more depressive than anything as we watch homeless musicians and drug addicts stagger round on stage. This is not to say that we didn’t see a firm shake of that in the “Metal years” release, though on a much more enlightening note.

The blurays contain subtitled tracks which really saved the day when trying to decipher lyrics. This in itself provides amusement as we can actually see how these bands manage to slaughter their own songs and churn them into indecipherable mumbled rubbish.

On that note, the “Metal Years” is highly theatrical, amusing, culture driven and very representative of the times especially when it comes to the LA scene. This era which was highly driven by sex, lavish makeup, and outrageous wardrobes managed to be one of the most entertaining times in rock and roll history. 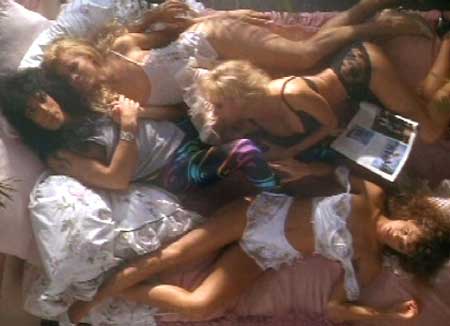 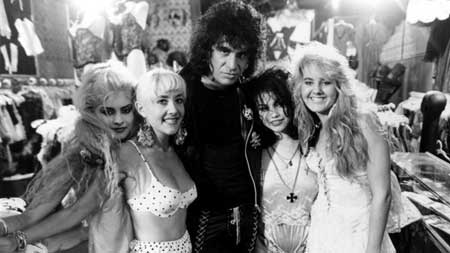 We are given tons of great interview segments with all sorts of top name acts such as: Kiss, Alice Cooper, Ozzy, Poison, Vixen and more! Despite the MTV style interview segments, it is really the private individual interviews that are eye opening for this time. We are introduced to several individuals (who blinded by assumed stardom and blossoming careers) would leave their marks of ridiculousness for all to see. Odin, a featured up and comer rock act would define this notion to the T. A band with high hopes and local support are seen for what they really are…a talent less bunch who can’t write, cant perform, and tend to believe that by letting their singer prance around in ass-less pants it would not be perceived as simply homosexual looking more than it was sexy.

These are the great moments of this documentary. That realization of where the younger minds “were” in those days. It almost demands a “where are they now” follow-up…… if only to convey the notion that many were “blinded in the moment” and not thinking straight about their futures. Rather than laugh “with” them, I found it easier to laugh “at” them. Surely one would find humor in the comments about makeup application or the male dependence on women to feed them thru it all…..surely

The flyers, the lyrics,  the female exploitation and the pretentious male ego says much about why this culture was so caught up in the moment that it would only be fleeting never to return. yes, I do miss those days myself. The film brings back alot of memories. But society has moved on………sadly. Those days are only a blink, a blink captured in the film.

the 3rd release tackles more of the same with an emphasis on the “gutter punks” scene and their backlash attitude against society. Penelope Spheeris makes her way thru interview after interview revealing the hard lives, choices and realities of these youths.

The set runs about $48, and is highly worth the investment in a look back at an age long past. Like the VHS set Woodstock which was also highly regarded,  The Decline Of Western Civilization Collection brings things into perspective during the 80’s music scenes and genres. 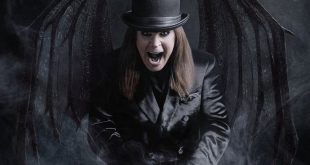 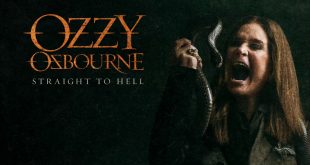