SYNOPSIS:
“Sewer Chewer is a tribute to the creature features of the seventies and eighties drive-in movies. A space satellite falls to earth and lands in a rural area, radiating the local wildlife into a mutant monster that has a large appetite for humans. An unnamed government agency sends a special agent out to dispose of the satellite and the mutant and any who know of it.” (courtesy IMDB)

REVIEW:
I watched Sewer Chewer (2010) a couple of times last month and, to be completely straightforward, it’s quite awful – and not necessarily in a good way. Writer-director-editor-cinematographer-composer-special effects artist Jack Acid‘s Sewer Chewer stars Troma CEO Lloyd Kaufman and sexy Jiffy Houghton. An American satellite falls out of its orbit and smashes to the ground in a wooded area. Its fuel leaks into a creek and creates a monstrosity that is on the prowl and ready to kill! A special retrieval agent from a certain unnamed government agency arrives to find that only he can stop the monster without letting the public ever find out about it, but each time the creature eats it grows bigger and bigger. 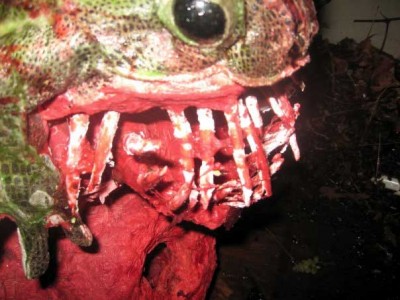 The opening credits seem to go on forever, and it’s a full seventeen minutes before the first barely audible words are spoken. If I hadn’t read the synopsis, I would have had no idea what was going on at the beginning – mostly an incomprehensible blur and shaky shots of microscopic bacteria after a few paragraphs concerning satellites – until we get to the first victim in a bathroom, after which several people are attacked by papier mache sticks dipped in KY jelly. According to the lengthy credits, Jack Acid does just about everything on the film – he really has to get other people to work with, like a sound recordist, a lighting person, and a camera tripod. Nevertheless, there are a few promising scenes that work. 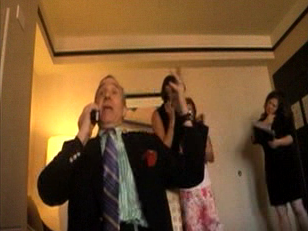 I sincerely wanted to know what Mr. Acid was thinking when he was putting all this together. I love surrealism and appreciate no-budget student films and so-called underground films. I’m reminded of the student films of directors like David Lynch or Clive Barker – very weird indeed, but at least they were mostly in focus, better-lit, with clearer sound. Furthermore, Lynch and Barker didn’t have the film-making technology that’s at Mr. Acid’s disposal nowadays – I mean, apart from filming it on video then putting scratchy film filters over it, that is. I started researching Sewer Chewer, looking around at different reviews and articles, only to discover that I seem to be quite alone in my opinion. It received rave reviews from established bloggers, and many compared it to David Lynch. I also discovered Mr. Acid is not the newcomer to film-making that I assumed he was. He has apparently completed two semesters of Film And Video Production taught by Grey Fredrickson of The Godfather (1972) films and Apocalypse Now (1979), so Mr. Acid should know the rules of traditional film-making quite well. Apparently he wanted to do something new and different. 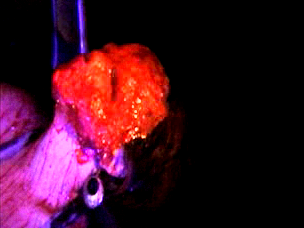 This only uncovered more questions: After all that experience, how on earth did Sewer Chewer come to look and sound the way it does? In what ways is the film ‘new and different’? Why resort to using the in-camera microphone? Why do the opening credits go for so bloody long? Further research and reviews revealed his goal was to make a feature without the need for dialogue, which is why the heavy synthesizer score filled the dialogue-less voids. As for the quality of the recording, it has been highlighted by several reviewers as an actual character of the film itself. Mr. Acid has produced abstract and experimental music for over a decade now, and has been picked up by some high-profile record labels that cater to that particular sound. 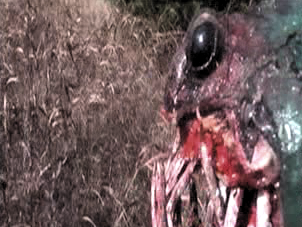 He deliberately wanted a grubby, dirty look similar to grindhouse films of the seventies and eighties, which was also praised by several reviewers who specialise in underground films of this kind. The opening credits sequence actually represent an amphibian mutation – hence the cells multiplying behind the credits while it cuts between scattered satellite debris and the titles. After that, the film focuses almost entirely on the monster killing different people as it moves from location to location in real time. Speaking of which, the ‘papier mache sticks dipped in KY jelly’ won Best Monster at the Tulsa Underground Horror Film Festival!

So I stand corrected. I had felt that I may have been out-of-line suggesting Sewer Chewer was awful, but I now understand that was exactly what Mr. Acid was trying to emulate, in which case perhaps ‘awful’ should be accepted as a compliment. Nevertheless, if I saw Sewer Chewer back in the eighties on a dodgy video, I’d still the say the very same things – and boy, did I see some dodgy videos back then! I’ll admit the monster gets better, the gore is over-the-top, and Lloyd Kaufman is terrifically enthusiastic as usual – as I said, there are a few good scenes – but that opening sequence! Most viewers switch-off after two minutes – that’s why most films in the last three decades leave most of their credits for the end of the film, and have an explosion or a ‘hook’ within the first few minutes. I’m certainly not suggesting Mr. Acid do that too, it’s just a good idea. Instead, Mr. Acid bombards the viewer with confusing blurry imagery, many credits for the same person and an overbearing soundtrack without dialogue for seventeen minutes – not even David Lynch could get away with that nowadays…although there are some scenes in Lost Highway (1997) that could do with a trim. I have since heard that Mr. Acid has done exactly that, but I have yet to see his new edit of Sewer Chewer. 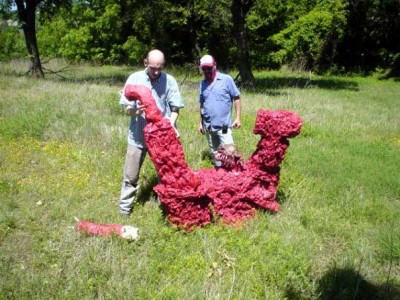 I love all sorts of films, genres, tastes and budgets – all I can do is compare Sewer Chewer with other films I’ve seen. I appreciate Mr. Acid has his fans – some of his work is obviously influenced by Kenneth Anger‘s underground films. Anger has his fans too, but I’m afraid I’m not one of them. The bottom line is Mr. Acid was entirely successful with Sewer Chewer. He got the result he wanted, and it’s with that thought in mind I’ll request your presence next week when I have the opportunity to present you with more unthinkable realities and unbelievable factoids of the darkest days of cinema, exposing the most daring shriek-and-shudder shock sensations to ever be found in the steaming cesspit known as…Horror News! Toodles!