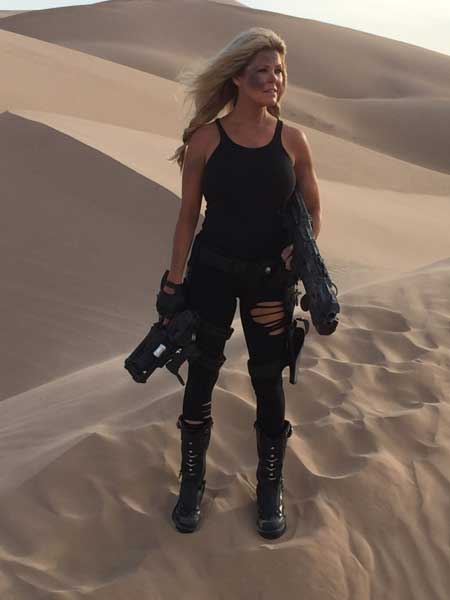 You went from being a Soap Opera star to an ass kicker, why did you decide to make the transition?

Tracey – I oftentimes refer to being an actor as having schizophrenic tendencies. Not that we suffer from schizophrenia; however, we can take on other ways of being and lives almost as easily as others change their outfits or makeup. The soap opera actress still lives inside of me, as does the drama queen and the comedic boundary-pusher; however, the ass kicker in Science Fiction will always be my favorite new persona… As a lover of the genre, a workout fanatic, and a person who trains in physical fighting and boxing… this is by far the most fun genre I’ve ever been lucky enough to work within.

Could you please tell me a little about the ROBOT FIGHTER?

Tracey- ROBOT FIGHTER is a Science Fiction film set in the distant future depicting the overthrow of humanity by artificial intelligence on Earth and other worlds. I play the lead role of Sienna – a bit of a rogue warrior trying to stop the AI. She also has some inner struggles that she’s dealing with which make her character really interesting. Her character has some very challenging issues, which make not just the physical journey enticing, but also the psychological aspect of her journey. I love these strong female characters in character-driven science fiction.

What was the biggest challenge for you filming the movie?

Tracey- I was completely prepared for ROBOT FIGHTER from a script standpoint, a physicality and endurance standpoint, everything. I knew who the character was and what she was doing and what her backstory was and what her motivations were. It was clear as a bell. When we got out into the desert, at some points in the movie, those sand dunes were really high and the wind was pelting at ridiculous miles per hour. I was in heavy boots with large guns that took their toll on my wrists, no complaints here! The biggest challenge was the many takes running down the sand dunes in the heavy winds without sunglasses. My eyes, my ears, my everything was full of sand. Director Neil Johnson and I could only see each other from a distance – we couldn’t hear each other over the distance and the wind. He said to me “when I raise my arm, it means ACTION.” I said to him, “When I stand up it means I can do it again!” So I would tredge to the top the long way (you can’t show your footprints in the sand), clear my eyes, empty my boots, breathe 1,000 times and stand up ready to go again. I was completely disconnected from my ability level and just focused on when I could run… and fight… again. Truly challenging. So much that I just want to do it again… and again… 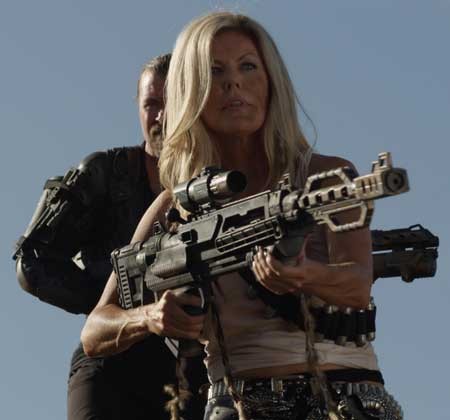 You play an intergalactic heroine “who battles droids for the earth,” do you think you would do just as good in real life battling?

Tracey-When we are battling, we are completely drawn into the experience. We believe it wholeheartedly. The same as when we have a role where we are battling humans. In real life, however, we aren’t as sure of our capabilities or as confident. We question things if they’re not within a script. That’s one of the reasons it’s easy to be a brave actress. You see in a script we know where the story is going and what we’re supposed to do. In real life there is no clear choice or path. That said, I can hold my own in a fight – but I only fight in training

Please tell me about your next project you are working on?

Tracey-I’m currently lensing the comedic feature film “Who’s Jenna Jameson?” in New Jersey and New York. It’s a hilarious comedy about mistaken identity, and a refreshing storyline of good humor and hilarity with a fantastic cast (including Bill Sorvino, Joe D’Onofrio and Garry Pastore) and fantastic director (Thomas Baldinger of 624 Productions!) It’s very exciting that a big comedy like “Who’s Jenna Jameson?” and a huge Science Fiction film like “Robot Fighter” will be released around the same time. Love that! 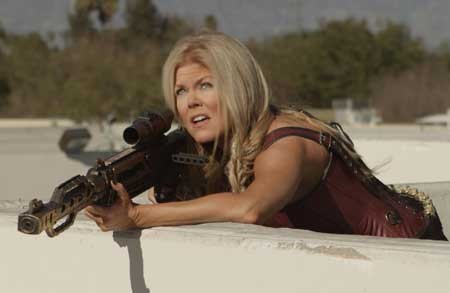 You have starred in so many different film genres and played a variety of characters! Is there a genre that you would like to conquer but have not yet done it?

You are in incredible shape, what type of work did you have to go through to play the character in ROBOT FIGHTER?

Tracey-Did I say this is a lot of work?! First off, I couldn’t have played the part if I didn’t focus on fitness and endurance. You have to already be there before they cast and before you plan to shoot. I worked with my fight trainer and my trainer in the gym almost every day – but I try to do that anyways. You see, if you keep up on these things then you’re ready when the opportunity arises.

What advice would do you have for upcoming Actresses?

Tracey-Actresses need to realize how much work they have to put out. Prep for auditions like it’s a shoot, prep for a shoot like it’s your life to live – way beyond your lines. Become the person you are going to be. Do something every day to further your career. Never compromise yourself. Your gut is everything. Train until the moment when you don’t have time to train anymore… Training involves your acting skills, your people studies, your body, your mind, your voice and your soul. Stay prepared. Be invaluable. Be kind. 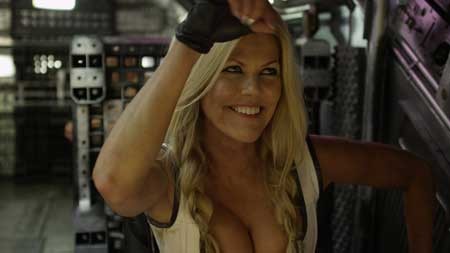 Please tell us when and where we can catch ROBOT FIGHTER?

Tracey-ROBOT FIGHTER is due to be released late this year in 2015! As soon as the release is set, we will be sure you know about it!

Are you on Social Media and how do you feel about social media?

Tracey-I love social media, as it’s a way to connect with our fans. A lot of times it’s a one-way street if I’m working, however people seem to understand that. If I’m between projects, I try and interact with people as that’s a big part of why we do what we do… for our audience… so I love them J On twitter, I’m @traceybirdsall1, on Instagram I’m traceybirdsall1, and on Facebook I’m facebook.com/traceybirdsallofficial . Of course there are links to all the social networking on my website at www.traceybirdsall.com ! 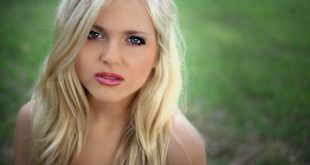