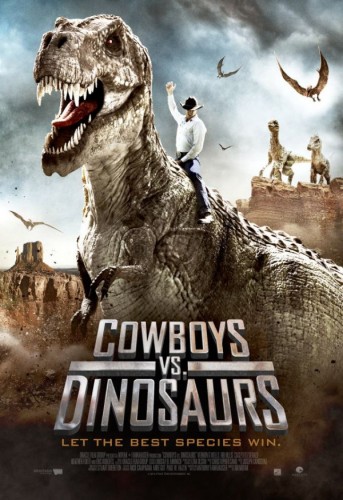 Ari Novak knows the film business. He’s worked various jobs in the industry, including driving trucks, visual effects supervisor, and held numerous other titles until forming the Oracle Film Group in 2004. In his quest to tell exciting stories, Oracle has done feature films, designed traveling exhibits, and did visual effects for a Broadway musical. This mixed bag of credits has led Ari into the directing chair and his latest feature is being unleashed upon the world, COWBOYS VS. DINOSAURS. I recently had a chat with Ari about his film and this is what he had to say.

Corey Danna: So COWBOYS VS. DINOSAURS, was this a script you discovered or did you commission it?

Ari Novak: It was something I conceived, actually. I was flying home from Belize while working on another SyFy movie. The movie was good but it felt like the jungle was trying to kill us, the people were trying to kill us, and it was just a pain to try and work in Belize. A lot of these SyFy movies get made in Belize and Bulgaria because it’s relatively inexpensive. I was just on vacation in Montana and it’s relatively inexpensive and it had me wondering if we could pull one of these films off there. So I started thinking about what would make a great SyFy movie and it hit me like a bolt of lightning: the mythology of the cowboy and pit it against dinosaurs. I thought it would be a fight I would want to see so that was basically it.

CD: Had you worked with Anthony Fankhauser (he wrote the script) previously?

AN: I worked with Anthony on RISE OF THE DINOSAURS also for SyFy, that’s the one we shot in Belize. He’s a really great and creative person. He has quite a few SyFy movies under his belt and is just a total pro. He’s a really fun guy to make a film with and always brings this cool, crazy, and whacky perspective you need to make these movies so much fun.

CD: What I liked about this film, and you don’t get enough of it, was that there was a real effort put into developing character as well as telling a story. Not all films in the this genre do that.

AN: We wanted to make a movie that was really more than just shooting a monster. The idea was to make this movie about redemption. This guy comes back to his home town to face this scorned lover and to face his demons. The dinosaurs are his metaphorical demons, he has to face these physical demons pouring out of the earth and face his emotional demons with this person he had wronged. It’s a story everyone can connect with, people will always have to ask for forgiveness at some point in their lives. That was the story I want to tell, a man asking for forgiveness, facing his demons, and looking for redemption. I wanted to develop these characters and tell a story with meat on its bones and not just blowing away T-Rex’s with a bazooka, which is fun too.

CD: How did you go about scouting locations after you decided to shoot in Montana?

AN: I’m quite familiar with Montana because I ice climb quite a bit. It turned me on to some beautiful country here and the Montana Film Office is awesome! They’re so dedicated, they drove us around and got us into some of the coolest places. I’ve never worked with a film office that supported a film more than they did. They’re tremendous and a real asset to filmmakers. 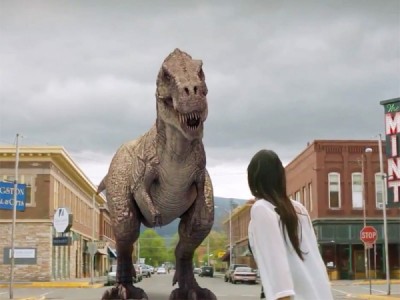 CD: Tell me a bit about the casting process?

AN: We had an eclectic cast and took our time putting them together. We had to cast some local Montanans’ and ended up with this really cool mix of seasoned actors and up and comers. Some of the cowboys you see in the movie are actual cowboys. Things like that really give it a cool vibe and some color.

CD: When did you decide you wanted to use fan favorite Vernon Wells in the film as your primary human villain?

AN: He’s the ultimate bad guy, he reads the phone book and I’m terrified of the phone book. Vernon Wells was sort of on a wish list. He and I talked on the phone and we talked a little about what we were trying to do with this picture and he had a background working in mines back in Australia, had a bunch of ideas, and was really into it. He was ready to go on the adventure and I was very grateful that he did. He was amazing!

CD: For sure he was! Then there’s Eric Roberts who can be such a madman on screen.

AN: Eric was such a treat. On the last day we filmed, he showed up and he’s really an actor. A lot of people disregard him because he’s been in so many of these films and that’s a shame because he’s such an asset. He will work on big movies like THE DARK KNIGHT and little films but his skills as an actor are undeniable. He walked onto set and he was so into that character and brought so many ideas. The whole scene where he’s puking in the jail was his idea. He came to the set to be in the film, not just to show up and collect his check. I’m very grateful for the beautiful performance he gave us. 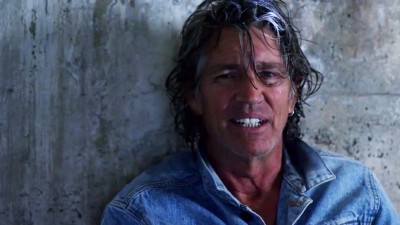 CD: I think his vomit scene is going to end up being one of the most talked about scenes in the movie.

AN: (laughs)Well we have Eric to thank for that.

CD: The dinosaurs are characters as well, what was your starting point with them and coming up with their final look?

AN: We have our T-Rex, a Triceratops, we have a Raptor, so I thought to myself about what we haven’t seen. Dinosaurs are popular but what could we do that was new? The main thing I saw was putting them in different environments. Lets put a cowboy on the back of a triceratops riding it like a bucking bronco while fighting a T-Rex. We actually worked with a scientist here in Montana and some of the foremost experts in the science of dinosaurs to figure what one would be like if it had developed under the Earth. We used a lot of science based off of sea creatures that basically process gas to survive and live. That’s how we came up with the idea of methane filled dinosaurs that explode. It was a fun pre-production process.

CD: How does your effects background benefit you when working on a limited budget?

AN: It helped me greatly! COWBOYS VS. DINOSAURS has over 250 effects shots in it. To give you perspective, the average SyFy movie has only 75. The way we were able to pull those off is because I really have an intimate understanding of visual effects. I’ve been a visual effects supervisor on numerous films and we were able to get more out of the effects and make them look more realistic and make the action feel much bigger. I’ve been in the trenches with so many visual effects departments on films so I didn’t have to keep looking over my shoulder. I had a great visual effects supervisor but instead of trying to figure out how to do things, we just focused on how to make scenes better. We essentially had twelve days to shoot this movie and we have a lot of story, a lot of actors, and I think it turned out pretty damn good.

CD: Did you just say you shot it in twelve days?

AN: Technically we shot it in ten and a half days. Our lead actor was actually replaced two days into the film. We got Rib Hillis two days after that so we had to dump all our footage. I think we only saved maybe a half day worth of footage then started from square one on day three so we were a machine.

CD: What was the single most difficult part of finishing this film?

AN: Probably the visual effects and the physical toll being up basically for twelve days straight. It’s not that you’re shooting that long, it’s the logistics of movie making, moving to locations, planning your next day, overseeing two different units, and it’s all so challenging.

CD: Over the last few years there has been a slew of these “VS” type of films. What do you think the appeal is?

AN: They’re really imaginative if you think about it. It reminds me of being a little kid and taking all of my toys fighting them with each other. My G.I. Joe figures were battling with my Star Wars figures, it’s just fun. It creates wild and insane situations and appeals to the most inner child in all of us.

CD: You know, critics are always bashing these films but the fact is, when you sit down to watch them, you just have fun. You’re not supposed to sit there and over analyze them, you just need to relax and have a good time. COWBOYS VS. DINOSAURS delivers that.

AN: I agree, I think these movies are important and have some really cool things within them. If you’re going to compare them to some $100 million movie, you’re not going to get the same production value. If you want to just have an awesome time, this movie delivers.

CD: Your next film is already completed, what can you tell me about TIMBER THE TREASURE DOG?

AN: It’s a talking dog, Disney style adventure movie and it was amazing going to work every day and work with a bunch of nine year old kids. Everyone loves a talking dog so I think people are gonna dig it.

CD: Is there anything you would like to add about COWBOYS VS. DINOSAURS we didn’t cover?

AN: Tweet your thoughts about COWBOYS VS. DINOSAURS on Twitter, we love to read that stuff. Send us questions, fan mail, whatever, we appreciate the support.