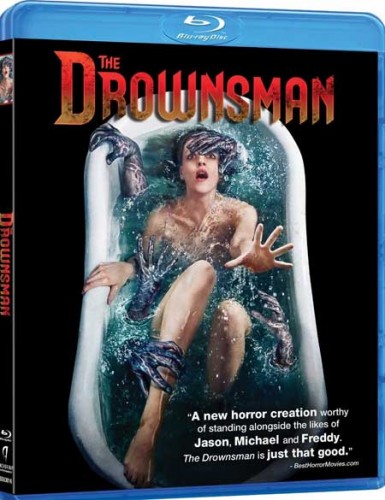 After almost drowning in a lake, Madison finds herself bound to a life of fear. Unable to describe what happened to her during the moments she was underwater, she begins to develop hydrophobia. Crippled by her post trauma, Madison attempts to shut out the world but her fear intensifies and she is faced with the vision of a dark figure that haunts her. After watching her struggle, Madison’s four friends attempt an unconventional intervention in which they accidentally open a floodgate to a dark place where none of them are safe. As Madison and her friends dive deeper into the dark history of this figure, it reaches out and begins dragging them to a horrifying place that they can never come back from.

Chad Archibald’s The Drownsman is as drip-dry throwback to the slashers of yesteryear; when killers were unstoppable supernatural creatures having long since lost any humanity they once had. Not just the self-aware genre of angry white men cutting bits off screaming nubile men and women over an extended period ala Hostel and the whole torture P*rn movement. And whilst he’s to be acknowledged for his efforts, not everything comes out well after the wash.

Michelle Mylett plays Madison; a spunky twenty-something whose only family is the friends she keeps. Celebrating her friend’s engagement at a lakeside retreat, Madison drunkenly slips and falls into the lake, and nearly drowns as a result. Whilst all her friends agree she is lucky to be alive, Madison hasn’t escaped unscathed. For when Madison was caught up in the wet embrace of the lake, she saw The Drownsman; a soggy, barnacled, serial killer who doesn’t want Madison to come up for air.

Madison’s brush with The Drownsman leaves her with crippling aquaphobia. So bad in fact, a year later, she has to ingest her liquids via IV and hates the sight of puddles. Judging by her glossy hair, it doesn’t seem to stop her from washing it, but let’s move on. When a thunderstorm causes Madison to freak out and miss her friend’s wedding, it’s decided by her peers that something has to be done. Rather than get her to see, I don’t know, say, a psychiatrist, Madison’s friends decide what she really needs is to be forced into a bath of water as part of a fake exorcism. True to genre, rather than cure her of her extreme mental illness – who would have thunk it?! – the girls unwittingly unleash The Drownsman, who starts taking them down one by one.

Considering her last horror, Antisocial, saw the world collapse due a killer virus spread by social media sites, Mylett seems to have a taste for the unusual. Which puts her in good stead, as she along with her colleagues, gives a strong, straight performance that never oversells the idea of a killer Aquaman, keeping the film more or less within the realms of realism. In the same way, Heather Langkencamp is the lynchpin that holds together the idea of a murderous pedophile that invades your dreams. If The Drownsman didn’t try to ground the narrative, it ran risk of floating away.

In a way, The Drownsman feels like the self-aware chapter of a horror franchise from 30 years previously. The Drownsman’s ability to grab people wherever there is water – from rain puddles to spilt drinks – does, at times, come across as a little Ghost Shark. There are at least two occasions where a victim’s feet can be seen gurgling down the drain like a Tom and Jerry cartoon. And yet, Archibald, who also wrote the film, is happy to make light occasionally of the internal logic he’s set up. Madison and her friends express severe anxiety at one point when they find themselves in a lift with someone opening a bottle of mineral water! In complete contrast, the Drownsman’s lair is saturated figuratively and literally with water and tanks with the express purpose holding someone firmly beneath the water line. It’s dark, it’s dank and it’s seriously messed up. 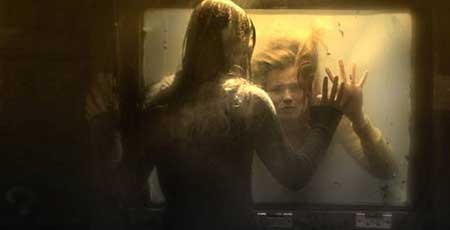 Despite the atmospherics and potential of The Drownsman’s bleak basement, the film is a largely bloodless affair that won‘t upset the stomach of any gore shy horror fans. Though the concept of being locked in a sealed glass box filling up with water is admittedly a damn sight more horrific as I don’t think there’s anyone who can’t imagine the panics that comes with drowning. And whilst other more hardcore fans may thumb their nose at the film, which asks us to make some serious leaps of logic at times, its best to see this as gateway film for those dipping their toe into the genre, before plunging headfirst into the worlds of Freddy, Jason and Leatherface. The Drownsman as it stands is not the next iconic horror, but it’s a worthy tribute to what clearly influenced its creation.

The Drownsman is now available on DVD per Anchor Bay