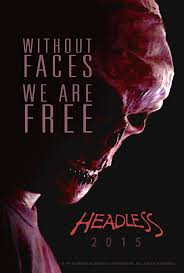 A masked killer is conducting an unrelenting spree of murder, cannibalism, and necrophilia. But when his tortured past comes back to haunt him, he plunges to even greater depths of madness and depravity, consuming the lives of a young woman and those she holds dear.

In 2012, director Scott Schirmer unleashed a film called Found onto an unsuspecting audience. I say “unleashed” because it is one of the most uncompromisingly grim films I’ve ever seen. I can clearly remember first watching it at the NYC Horror FIlm Festival a few years ago and sitting there in stunned silence after its final image, actually it stunned the entire audience I saw it with. Clearly, Mr. Schirmer became someone whose next work I was anxiously awaiting. But lo & behold, rather than follow up Found with another directorial venture, Schirmer has gone ahead to produce Headless, a film based on the film that a few of the characters from Found watched in the middle of that film. It is pretty much the most extreme movie I’ve seen this year, and I doubt that there are many other productions that are going to even attempt to outdo it anytime soon.

A skull masked killer (Shane Beasley) is on the rampage, abducting & murdering women in some extremely graphic ways. The film opens as he’s just captured his latest victim. He takes her into an abandoned building and ties her arms up above her head. He then proceeds to slice off one of her breasts, then gouges out one of her eyes, eating it before cutting off her legs, cutting off her head & (for lack of a better word), skullf*cking it.

That’s how this one begins people… 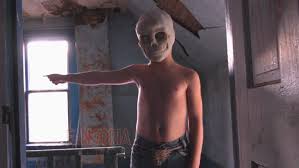 He accompanied by a young boy (Kaden Miller), who also happens to be wearing a skull mask and is called “Skull Boy” in the credits. Skull Boy may just exist in the killer’s head, but all he does is essentially watch as the killer goes about his gruesome business. Neither one of them actually speak to each other or in the film at all for that matter (The killer does issue the occasional scream though), but they do seem to share a close relationship. When he’s not killing women, the killer lives in the same dilapidated home he grew up in, sleeping in the cage his deranged mother & sister forced him to live in as a child. He’s spent so much of his life in that cage, he just can’t sleep anywhere else, he also keeps the severed heads of his victims in his home. His mother apparently hates him because his father left after he was born, and his sister is just a sadistic trollop who tortures him as a child, and then sexually molests him as a teen.

The boy is incapable of speech, whether this is due to a pre existing condition or by choice is never made clear, but the young actors who portray him in his childhood/adolescence, (once again) Kaden Miller & Matt Keeley do an outstanding job of giving the character a sense of innocence, pathos, and a deep seated sense of anger that remains hidden deep inside of his psyche – until he’s pushed too far and given an opportunity to escape. There is a plotline here regarding a young lady named Jess (Kelsey Carlisle), who works at a dead end job in a indoor roller skating arena, and her musician boyfriend Pete (Dave Parker), who’s a complete deadbeat. Jess is trying to better herself, but is so in love with Pete that she can’t really do much more than what she’s doing since she pays all of the household bills. Her boss (Brian Williams) is a horny bastard who’s always putting the movies on her & her best friend, Betsy (Ellie Church), is sympathetic to Jess’ problems, but she has a few issues that she’s keeping to herself. While I suppose the addition of this plot thread was necessary for the story (after all, our killer needs some people to kill), I thought it felt very stereotypical. Then again, the film is meant to be an homage to all things grindhouse, so it works overall. All of the performances are well essayed but Ms. Church is the standout here. 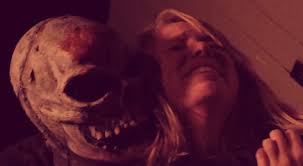 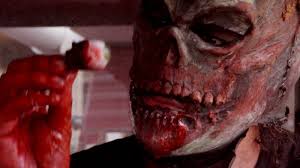 The film itself is a loving homage to all of the greasy, grimy & gory grindhouse films of the late 70’s – early 80’s. Director Arthur Cullipher (who was also in charge of special effects here & in Found), is obviously a fan of the genre and the films that spewed forth from it during the aforementioned time period. The production isn’t first rate, but it wasn’t meant to be. There are copious scratches & lines that run across the screen throughout the film’s running time. The cinematography (by Leya Taylor) is dark & oppressive, suitably grim enough for the lurid material. The script (by Nathan Erdel, who also has a small role in the film), is a definite throwback to the most extreme of the garish films released during the 1978-1988 (or thereabouts). It makes no excuses for what you’re about to watch and takes no prisoners afterwards. And if you’re the type of person who is even mildly sheepish when faced with what’s considered to be a gory flick nowadays, then my suggestion is that you stay away from Headless altogether. But if you’re the kind of person who likes a dash of mutilation, urination, blood bathing, skull f*cking, eyeball munching (lots of this actually), leg carving, breast slicing, abattoir escapades & any any number of completely repellent acts of cruelty – then Headless is right up your alley. 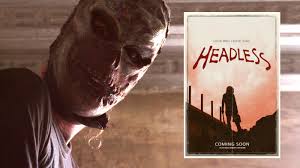 But despite all of its acts of graphic horror, Headless is ultimately a sad story about someone who was never really given a chance from the get go. Beasley really goes the distance with his performance here, and his actions say/mean a lot more than they would if he had any lines to utter. The final five minutes of the film are five of the most shockingly depressing minutes I’ve ever spent with any film, and Beasley really goes that extra mile during the film’s finale. Headless is a sincerely depressing, but incredibly well made film that is gonna turn off nearly everyone who sees it. Even if you’re a fan of Found (and I most certainly am), Headless is gonna leave a nasty taste in your mouth, and you’re gonna want to get in the shower as soon as it’s over. But that, in my most humble estimation, is what makes it so great. Headless is gonna move you, there’s no doubt about that. It might move you to the toilet, but it will move you. It most certainly isn’t for everyone, but I’m sure Cullipher & company knew exactly that as they were in the midst of making it. 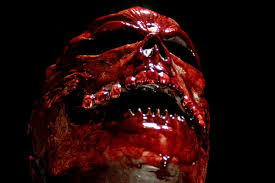 Bottom line is, you’re either gonna love it or hate it to pieces. There is absolutely NO middle ground to be found here, you’re either gonna revel in the sheer audaciousness of Headless, or run away from it screaming bloody murder. Either way, it has succeeded in what it set out to do. 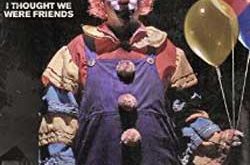 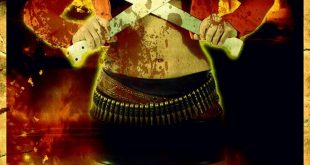