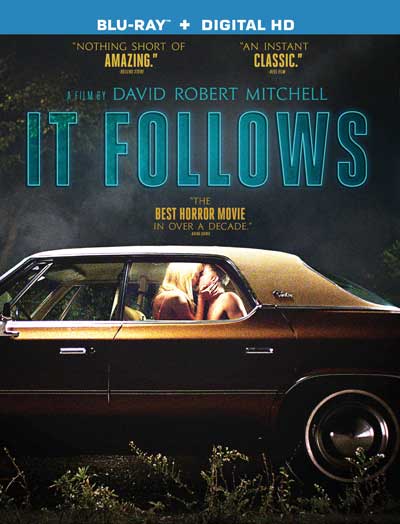 After a young girl gets involved in a sexual confrontation, she is followed by an unknown force.

It’s become something of a regular occurrence for those of us who watch horror films. Every so often, there’s a new one that has the critics falling down over themselves to declare it the scariest new film in decades, or the scariest film since The Exorcist (that one gets batted around a lot). But, as someone that has watched horror films for a long, long time, it has been my experience that when one of them gets a ton of praise – I’m probably not going to dig it very much. Why is this you ask? I really couldn’t say, perhaps I’m a curmudgeon, perhaps I’m jaded, perhaps I just refuse to drink the kool aid everyone else seems to be bathing in – I dunno. I just like what I like, despite how much everyone else might disagree with me. The latest horror film to be designated as the scariest thing since William Friedkin’s masterpiece is called It Follows, and after watching it (twice!), I’m really wondering if I saw the same film as everyone else has.

A pretty young girl named Jay (Maika Monroe), is pretty much the picture of a normal American teenager. She enjoys lounging in her pool, hanging out with her friends, & watching old movies at home with her family. And as a normal American teenage girl, she also has a healthy interest in American teenage boys, and goes on a date to the movies with Hugh (Jake Weary). After they sit down for the film, Hugh sees something (or someone) that rattles him, so they leave before the film even starts. He doesn’t tell Jay what bothered him so, but she suspects an ex girlfriend or something similar. Nevertheless, she agrees to a second date with him which culminates with sex in the backseat of Hugh’s car.

But immediately after the act, he knocks her out with a hanky soaked in chloroform (which is never the sign of a good date). Jay awakens to find herself tied to a chair in what looks like an abandoned factory of some type, and Hugh appears to explain to her that her situation is in no way related to Fifty Shades Of Gray. He explains to her that something is following him, something that began following him after he had sex with someone else. And the only way he can get it to stop following him is to pass it along to someone else by having sex with them. And if the person it’s following doesn’t pass it along before it catches up to them, it will kill them (as illustrated in the film’s opening). But it gets a bit more complicated, because if it does catch you before you pass it on, it will also kill the person who passed it on to you. Additionally, it’s only visible to whomever it’s following, and the person who passed it on to them, and it can take the form of any person it chooses to – oftentimes taking the form of someone close to the victim. Hugh proves this to her by giving her the chance to see “It” (in the form of a naked woman), slowly ambling towards them. He then puts her in his car, & dumps her off (still tied up), on her front lawn. She now has to convince her friends that she’s in mortal danger, and needs help in outwitting “It”. 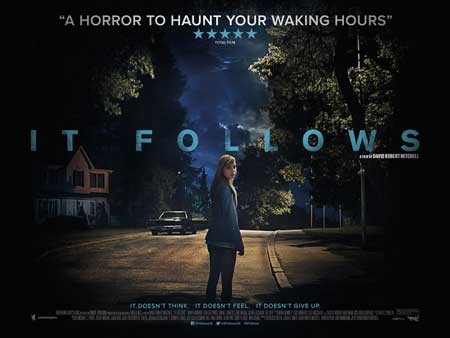 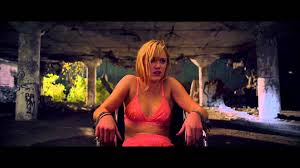 The metaphor that writer/director David Robert Mitchell is hitting us over the head with is immediately obvious, the main one being the standard slasher movie trope, “Have sex, you die“. It’s so blatant that I was kinda offended by its obviousness at first, but then I realized that there’s something else going on here. Mitchell hits upon the idea of the guilt involved in passing “It” along, since by doing so you know you’re possibly condemning someone to a horrible death – much like those who knowingly pass on the AIDS virus (or those that did anyway). The inherent drama in that situation is one that weighs heavily on Jay’s mind, which is why, rather than pass the curse along, she decides to destroy “It”. Interestingly enough, no clues are given to where “It” came from or what “It” actually looks like. That adds to the mystery behind its existence, and it allows the audience to imagine for themselves where it might’ve come from. and what it might look like. In that sense, It Follows is indeed pretty scary – after all, there’s nothing in the real world that’s as scary as what we can conjure up in our imaginations. 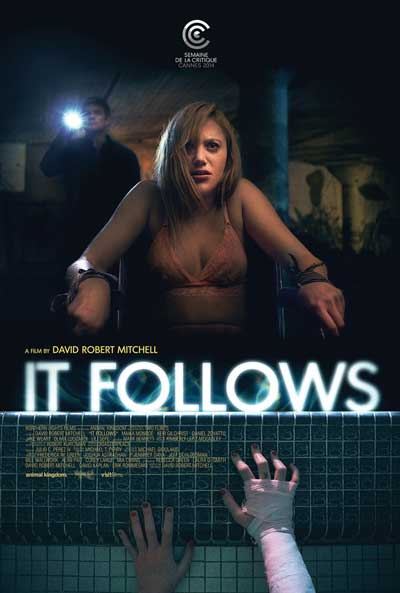 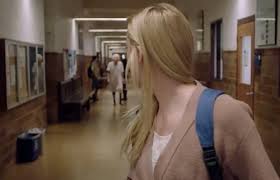 The script feels/sounds right. Mitchell has an ear for how teens might talk to one another, much like writer/director John Hughes did in his films like Sixteen Candles (1984) & The Breakfast Club (1985). Maika Monroe is an engaging actress, and she manages to combine strength, fear & vulnerability as Jay, and the entire cast do a great job of making all of this feel believable. Actually, there aren’t too many adults in the film at all, and the few that we do see come & go pretty quickly. I quite liked the idea of the film being set square on the shoulders of the teens, and the cast here delivers in spades. Although I wasn’t a fan of the cinematography here (by Mike Gioulakis), I do understand why the film looks the way it does though. It has a dreamy, almost otherworldly look that spot on fits the milieu. My dislike of it stems form the fact that the dreamy look of the proceedings make the film feel slow, it’s almost sleep inducing. Luckily, the soundtrack (by Rich Vreeland) keeps everything moving along nicely, it’s both bombastic and low key (sometimes at the same time), and works very nicely in underscoring the tension in the film. 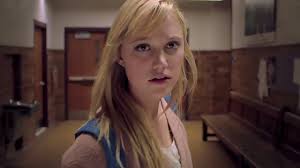 What It Follows does well, it does very well. It is indeed very tense at times, it’s also an interesting window into the lives of average American teens. The titular creature works because it chooses to look like you or me (with the occasional ocular deviation), which allows the audiences minds to run amok imagining what it might really look like. Mitchell’s direction is strong and sure footed, with some interesting camera perspectives that put us smack dab in Jay’s shoes. The cast is strong and believable as well. It’s a well mounted production from stem to stern – no doubt. But it just isn’t scary, at least not to these eyes. There is tension aplenty to be found here, but tension doesn’t always equal scary. The idea of an unstoppable creature that’s hellbent on getting to you, no matter what (The Terminator?) can be scary I suppose, but It Follows plays things a little too low key for the supposed scares to be effective. But this is just my opinion mind you, I’m not gonna get into a debate with anyone who finds this film scary – there are way too many of you out there for me to win that debate anyway. 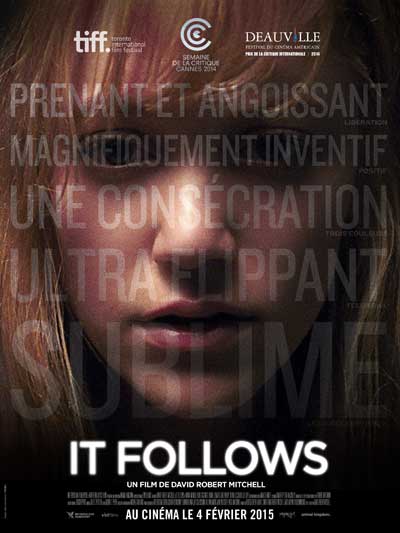 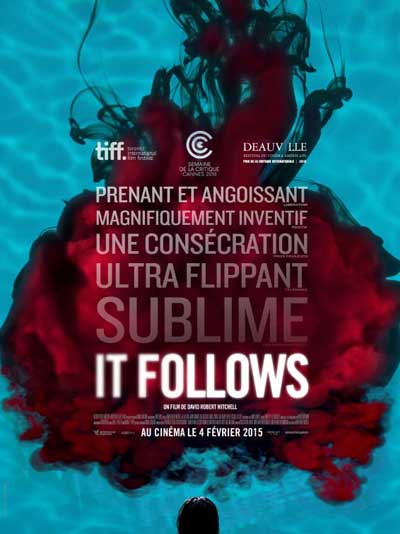 Suffice it to say that I found It Follows to be an engaging film with a interesting (& unique) storyline that works on a few different levels. It’s the most unique horror film I’ve seen in a long time, which is heady praise coming from me. But as to it’s being the scariest horror film in years…

Methinks whoever believes that hasn’t seen too many horror films.

It Follows will be available on bluray per Anchor Bay