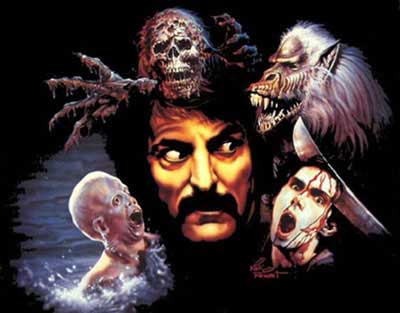 What do you get when you cross 100 gallons of foam latex, and a steroid freak biker Mafia Don zombie with a c**k gun? Sound the trumpets, the King of Splatter approaches! That’s right you f*ckin Nerds, kneel at the throne of blood. He’s the man who gives a new meaning to the saying, “No guts, no glory”. Tom Savini, the Godfather of Gore, demands you kiss his ring. There is none more respected and feared in the horror game as Tom “Sex Machine” Savini, and he’s droppin some knowledge about all things horror with me, the Rots man.

Awesome, let’s get started talking about Friday the 13th. The big remake is coming out soon, and myself as well as countless other fans are pissed that this milestone in horror is being redone. How do you feel about the new remake trend?

Well, the reason there are so many remakes is that the original ideas people are coming up with are ….let’s see….your cell phone is going to kill you….or Jessica Alba gets an eye transplant and suddenly she can travel time….STUPID…..they are just stupid….so when so much money is involved they look for something that was a success and made some money and they are trying to capitalize on that. You don’t see them remaking something that didn’t make money do you?

Jason doesn’t exist…and to try to make you believe it ….is saying you are dumb enough to believe it. So …..you are stupid….but give us your money. I was in a panel with Betsy Palmer and the cast of the original and Betsy did shed some light on this theory. Let’s say Jason was never found…there was no funeral…..every one just assumed he drowned. There’s the motive for the mother….and why Jason is still around….BUT….that still asks you to believe that as a child he crawled out of the lake…confused….lives by what?.,…..eating crayfish….and for thirty five years no one saw him?????!!!!!!!

So this argument isn’t even if Jason is a zombie or not, it’s that he doesn’t even exist . . . good point.
Tom, I hate remakes, although I am a fan of a few, Night 90’ being one of them. You did what few others were able to do with a remake. You paid homage to a classic while bringing contemporary effects and a modern attitude to the film. Why do you think your Night of the Living Dead remake had a fresh feel without f*cking with the integrity of the original?

Cause it was done they way it was supposed to be done by people who cared about it like me and George Romero. He wasn’t there for the shooting until a bit at the end…..but the movie is only about 30% of what I intended to do so I hated it for many years thinking it was crap because it didn’t have the shots or effects I wanted to do. Welcome to showbiz. George had the same problem with producers on Day of the Dead. I got to see it again at a midnight show. I did a Q and A before the screening and wasn’t going to stay to watch it but I did and to my surprise I was able for the first time to be completely objective….as if it was someone’s else’s film….and it was damn good. The acting is good, the camera, the suspense……it just didn’t have the gore we shot thanks to the MPA. You got to see a strict remake of the original and a surprise ending and a bit of a sequel.

How many takes did you do to get the back flip off the pool table in From Dusk Til Dawn?

One take to lots of applause.

Biker back flips, kick ass . . .
American audiences had never really seen graphic gore on screen prior to Dawn of the Dead, Friday the 13th, and some of your other early films. Before that, Europe, especially Italy, was the only place these type of special makeup effects existed. What were some of the European filmmakers and FX artists that influenced you back in the old days?

I wasn’t really familiar with them. The movies yes. It was after Zombie that I became familiar with and finally met Sergio Stivaletti.

Giannetto De Rossi did some amazing work in Zombie, Stivaletti was good as well, I loved Cemetery Man . . . You’ve created some of the most memorable gore scenes of all time. Tearing Capt. Rhodes apart in Day of the Dead, the arrow through Kevin Bacon’s neck in Friday, and the headshot in Maniac to name a few, but what is your favorite gore scene in film history?

The stuff that Rob Bottin did in John Carpentar’s The Thing.

Who were some of the artists and technicians that made it possible for you to pull off some of those amazing make-ups and gags back in your FX days?

If your talking about my assistants and crew I dedicated my first book Grande Illusions to them and you’ll find that on the front cover. Couldn’t have done it without them.

I heard a story about someone getting too close with a female prop body from Two Evil Eyes, can you tell us a little about this or any other hilarious shop stories?

Actually, it was the prop bodies for Friday the 13th part 4, the Final Chapter. There was a guy…fresh out of prison…living in the studio. We noticed the paint chipping on one of the female bodies and then Vaseline…and pubic hair….He was f*cking our rubber dummies!

Ha ha . . .That is both horrifying and humorous . . .
You idolized Lon Chaney. He created so many amazing make-ups and characters in his career, what was your favorite?

The Phantom of the Opera.

My favorite is London After Midnight . . .
You had a cameo in Kevin smith’s Zack and Miri Make a P*rno. The entire film was centered around the hometown atmosphere of Pittsburgh. The name Tom Savini is as “Iron City” as The Steelers and bridges. How does it feel to be a Pittsburgh icon?

I feel proud and rewarded to walk the same streets I did as a kid…poor….unnoticed….with an extraordinary love of movies…..to now be a part of them….still live in the house I was born and raised in….I have not lost my sense of home…..I have all the toys I wished for…..I have the room I always wanted as a kid…with monsters and swords…and a big TV…..It just gives me a real sense of accomplishment and a knowing that dreams do come true.

You are a master with a whip, but be honest Tom. Have you ever accidentally destroyed anything or anyone during your whip demo?

Nope, never hurt anyone and only destroyed Styrofoam cups.

Ha ha, that’s not what I heard . . .
Outside of the film industry, what’s your greatest achievement, so far?

There are too many to mention and outside a personal level….my make up effects school and my digital filmmaking school.

That’s impossible to answer but among my top ten would be the Exorcist…..Alien….Frankenstein……
The Haunting……Psycho……….etc.

Neither…..but I haven’t seen the new one yet with Benecio Del Toro……so we’ll see.

Who would win in a no holds barred fight to the death Jason Voorhees from The Final Chapter or Cropsy from The Burning?

Drowning or burning at the stake.

Lastly, Tom, tell us a bit about His Name Was Jason: 30 Years of Friday the 13th and some of the other projects you’re working on.

His Name Was Jason is a doc about all the Friday the 13th movies and it’s damn good. There are thirteen segments and I host and introduce them all. It’s pretty funny too. Well, you mentioned
Zack and Miri…and my part was much much longer and it was all cut for the theatrical release and I’m hoping there will be more of it on the DVD. I did a thing called Sea of Dust that isn’t out yet, and Lost Boys the Tribe was a good part for me, and now I’m directing more Chill Factor episodes, but it won’t be called that, at my film school. Every semester now I will do one, plus other stuff with the students.

That sounds super badass, Tom. You heard it here, kids! Tom “The King of Splatter” Savini says new horror is STUPID and remakes are a money-making scheme! Thanks to Tom for his time and his zombie machete-ing skills. We’re lookin forward to more action packed Savini-ness from Blades.

Get more Savini info at www.savini.com . . .
Check out His Name Was Jason: 30 years of Friday the 13th at www.myspace.com/hisnamewasjason
and look for its release this February.