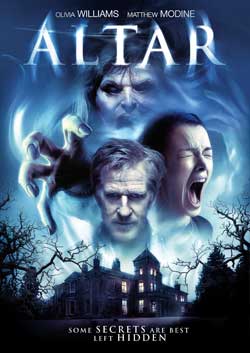 A family of four moves in temporarily to a house on the British moors. They have the intention of renovating it, but, they find, it’s the site of an old ritualistic killing. Naturally, the house is haunted.

Meg Hamilton (Olivia Williams) restores historic houses. That’s what brings her and her family to the Radcliffe house, a crumbling mansion, isolated in the British moors. Her husband, Alec (Matthew Modine) is a struggling artist, who’s happy to call the Radcliffe place home, to work on his art, while Meg goes to work on its remodel. This place is going to make a great Bed and Breakfast someday soon. Or will it?

“I have a feeling this house is full of surprises,” Meg says. Sure enough, it is, but it’s not quite filled with the type of surprises she had in mind. Slowly, Meg and Alec and their two children, Penny (Antonia Clarke) and Harper (Adam Thomas Wright), start to notice strange things manifesting inside the house.

There’s a lady seen wandering around, unexplainable shadows in photos taken of the house, windows closing on their own, et al. Alec is also developing a strange and uncharacteristic habit: blood letting. Meg isn’t the type of woman who likes her husband to bleed all over while giving a back massage. Maybe it has something to do with the discovery of a boarded up room in the house, which is really an altar—for human sacrifice.

We learn from one of the laborers that the former owner of the mansion “killed his wife in some sort of ritual.” And “she haunted him day and night till he jumped out of his window.”

The evil forces are very much alive inside and they pose a formidable threat to Meg, Alec, Penny, and Harper.

ALTAR is an interesting film, insofar as it isn’t afraid to take the slow-burn approach to horror. Things come on slowly, in small gradients. But it works. Olivia Williams’s portrayal of Meg Hamilton is well-executed enough for the said approach to be effective. Meg, at first, plays it off oblivious and care-free, as the clues to the house’s evil come. She’s not superstitious and therefore unconcerned. At least in the scenes where she’s talking to her children about it. There are scenes where she lets on, when she’s alone, she’s totally creeped out.

But the success of her career is at stake, and so she must keep hitting her internal ignore button. There’s a great scene where Penny comes to Meg telling her she wants to have the house blessed; she’s been looking into it online, posting about the house on social media. Meg, flustered, explains she’s got a reputation to uphold and therefore can’t have any attention drawn to such things. Ignorance of the supernatural is easier said than done, of course, when your husband isn’t ritualistically bleeding all over the house on things.

It’s nice plot structuring, having our hero fight off her temptation to be disturbed, until that, literally, is no longer a possibility.

Matthew Modine as Alec Hamilton also gives a great performance, though as the opposite character of Meg. He’s in an almost Lovecraftian trance, and does a great job staring into space with dark possession in his eyes. Very creepy.

The film’s special effects, namely its ghosts, are well-done, too, and in a simplistic, often suggested-rather-than-shown manner. For movies with this kind of budget (not colossal), the stripped-down depictions seem to work best. 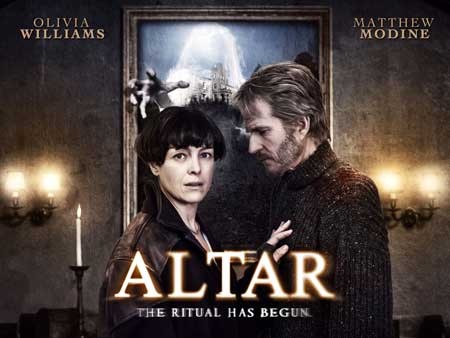 The problems with ALTAR come with simply the type of movie it is, another dyed-in-the-wool haunted house flick–one with all the familiar tropes. The acting is good, pacing is good, effects are good, so is the mood and atmosphere, but as a genre piece it contributes nothing new, breaks no new ground. Still, it is worth checking out, especially for fans of the British school of horror.