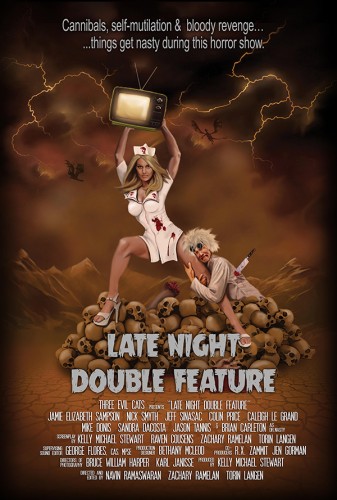 Where to begin! This one kind of left me a bit speechless and asking myself what the hell did I just watch! Seriously, everything about it is very ‘different’ to anything else I have seen recently. This actually turned out to be a good thing! I will be honest, I was not expecting any thing good to come out of this film. I even put off watching it for over a week and left it at the bottom of my pile!

It reminds me of the old ‘Tales From The Crypt Keeper’ in the style it is presented. Except in this version, we have ‘Doctor Nasty’s Cavalcade Of Horror’. Our host, Doctor Nasty, is the host of a low budget TV show and brings us a series of smaller stories that take place inside the main movie. They even went the extra mile to bring us some fake TV adverts and fake movie trailers to make the feeling more authentic and to engross the viewer more. I can not help but be inclined to give props to any movie that goes out of its way for the viewers sake!

The two short stories we are presented with are ‘Dinner For Monsters’ and ‘Slit’. Slit was, in my opinion, the better of the 2 short stories offered in this movie.

Dinner for Monsters is about a failing restaurant owner who gets a big catering job for a remote hunting lodge. His assignment requires him to cook the meals with a very ‘specific’ ingredient. I will not say what, that would be ruining the story!

The second of the two features, Slit, is about a man who has a very unusual occupation. He cuts the flesh of his clientele to provide them with some emotional relief. That is until he meets with a new, very challenging client. I felt this was the better story as they went to the effort to make it seem gloomy and dark just as it would be if this was a real profession. It also made for some cringe worthy moments as well! Just like a good horror movie should.

The third and final part focuses on the main show itself and puts more of a comedic swing on things. This is where it kind of lost me. I personally believe that horror and comedy are two genres that should never mix. It is just bloody awful, you watch a horror to be scared you watch a comedy to laugh.. Those two never merge well for me … personally.

This is a very out there and in your face at times kind of movie. It is definitely an experience! Would I watch it again? No, would I recommend it to family and friends, may be, but most likely not.

Again as expected it is a B grade horror movie with a budget to match. Although, for once I think the low budget adds a certain ‘je naid sais quoi’ that I can not put my finger on. It just gives the film a certain all round feeling.

Sure the acting leaves a lot to be desired but I think they intentionally went for the over the top style, which, once again sets a certain theme. As a HUGE fan of ‘Tales From The Crypt Keeper‘, I did not actually mind this.

All in all it made for a viewing experience of a different kind than I am used to. I welcome the break up from the usual!

Based on my viewing experience today of Late Night Double Feature, I am going to give it a 5.5/10. Aside from all the above factors, this movie was ALOT better than I expected it to be. In fact, it was better than average, hence my extra half star. I quite liked this, if you are looking for something different to watch with out over the top expectations this movie may very well be for you!