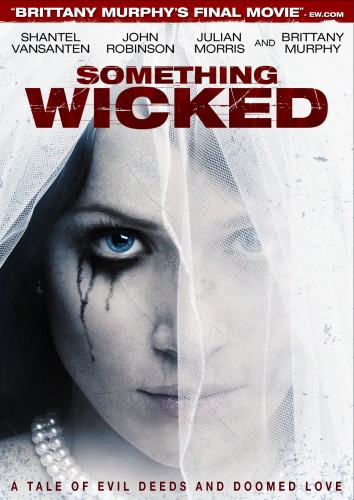 A year after losing her parents in an automobile accident things go from bad to worse for Christine. Not only is she being stalked by a mysterious hooded man but she is also receiving messages from her deceased parents that seem to be trying to warn her about something. Is it all really happening or is it all just in her head?

I wasn’t too familiar with Something Wicked other than the fact that it was Brittany Murphy’s last film (man I miss her. Is there any way we could trade in the entire Kardashian clan and get her back? I’ll even throw in Kanye’s useless ass too) so I researched it online a little before I watched it as I didn’t have a clue as to what it was about. I ran across a lot of negative reviews for it so I went into it with pretty low expectations. By the time everything was said and done I actually enjoyed it and didn’t think that it was nearly as bad as some of the online reviews I read made it out to be. I was pleasantly surprised by how good it was and thought that it was a pretty interesting little suspense/thriller that kept me guessing until the end.

I thought that the movie was well-written and had a pretty compelling premise. While it isn’t an all out horror film I still dug it and thought that it was entertaining for the most part. Essentially the movie follows a young woman a year after the death of her parents as she is trying to get on with her life. She lives with her creepy older brother (who is a little too interested in her as he likes to watch her undress and have sex with her fiancée) and his wife (played by Murphy) and is recently engaged to her long-time boyfriend that her late parents didn’t really approve of (mainly because he’s kind of a weenie if you ask me). A hooded man starts stalking her and before she knows it she is getting written warnings from her dead parents. Who is the hooded man and why is he stalking her? What are her parents trying to warn her about? I’m not saying because that would ruin the surprise that takes place toward the end. I figured some of it out before it was all revealed in the end but I’ll have to admit that I was a little surprised by the twist at the film’s conclusion as I didn’t see it coming (even though looking back it is hinted at several times during the course of the movie). I thought that it was a fun, suspenseful movie and I had a good time trying to piece everything together for myself before we got all the answers. In a lot of ways it reminded me of the cool old USA original movies that they used to run back on Wednesday nights back in the 90’s and I enjoyed the time I spent with Something Wicked despite its minor flaws (more on that in a second). 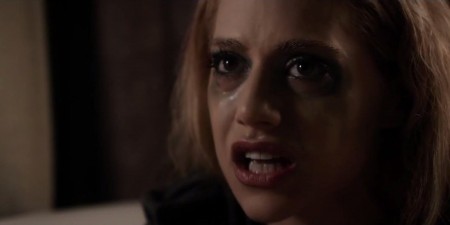 I also thought that the cast was pretty awesome. Shantel VanSanten (who I thought looked a lot like Shawnee Smith) was good as Christine. She pretty much owns every scene that she is in and she did a great job of bringing the character to life. James Patrick Stuart was equally good as her brother Bill, but I do wish that his character was a little more fleshed out (Why is he such an asshole? What is up with him wanting to watch his sister undress and have sex?) as I was a little confused as to why he did some of the things that he did. My favorite character though was Susan, played by Brittany Murphy. Murphy knocks it out of the park as usual and I was really rooting for her. She is pretty much the main reason to see the movie and as I said earlier it makes me more than a little sad that she is no longer with us as I have always been a big fan of her work. Even though I liked most of the cast I thought that John Robinson just sort of phoned it in. He did a piss poor job of portraying James, Christine’s fiancé and I just didn’t care for the character in general as he was sort of a dopey loser that goes through most of the movie mumbling and stammering incoherently. I also wasn’t too big on Julian Morris as Ryan either as the character just seemed a little pointless to me and didn’t really do anything that important despite the fact that a large portion of the film is spent on the character.

As I said earlier even though I enjoyed the movie is wasn’t without its problems. I thought that the whole subplot with John Anderson’s family was boring and sort of pointless and there was almost too much time devoted to it. I also thought that the reason that the hooded man was stalking Christine was sort of a letdown as well and just seemed more than a little forced (to be quite honest the whole hooded man stalking her thing could have been left out of the movie entirely as it goes nowhere and the payoff is a little lame considering the big twist that we get at the end). I really didn’t care for the final scene of the movie either as it seemed kind of hokey and really unnecessary. I think it must have just been thrown in there at the last moment as an afterthought and to shock viewers but it just doesn’t work for a number of reasons.

I liked Something Wicked for the most part. It wasn’t the best movie I have seen so far this year but as the same time I wasn’t the worst. It does have a lot going for it and is a good time waster regardless of the handful of issues that it has. If you are into suspense/thrillers you will enjoy this movie but if you are looking for more of a hardcore horror film you may want to look elsewhere. Check it out if you are curious, you could do a lot worse.