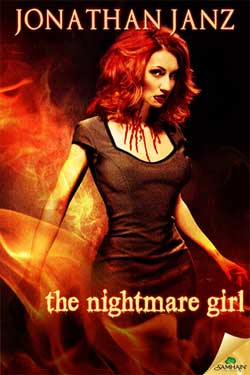 You ever feel like no matter what good you do for someone, no matter how hard you try, you just can’t win? Well, let me introduce you to Joe Crawford. Joe was on his way home with his wife and young daughter when he realized he had to stop for gas. While pumping, he couldn’t help but notice a very small child in a nearby car crying its little head off. Soon after, he couldn’t help but notice the sickening sound of flesh against flesh, and decided it was his business to step in and stop the young lady from further beating her now screaming child. All he was trying to do was save a little kid from being abused; who knew such a deed would bring such dire, punishing ramifications?

I’ve been hearing a lot of good things about Jonathan Janz lately. Another title of his (Dust Devils) made horror legend Brian Keene’s top ten reads of 2014. His work also came highly recommended by another rising name in horror, Adam Ceasare (The Summer Job, Video Night). The Nightmare Girl is my first encounter with Janz’s writing, but it won’t be my last. This guy has skills, and he really knows how to not only bring fictional characters to life, but also how to plunge the reader headfirst into his world. His writing is very straight-forward and engaging; I ended up reading this book in one sitting, I was so drawn in.

We follow Joe and his wife, Michelle, and their little girl, Lily, in the aftermath of his playing hero. But the family of the little boy he saves, Angie Waltz and her mother Sharon, go from being random nobodies in Joe’s life to regular, every day disturbances. Things really pick up when Angie, after pleading with Joe, begging him to change his story so that she can get her child back, offering him anything in exchange for his help, but to no avail, does something so drastic and disturbing that it will change things for everyone involved forever. Soon there are strangers threatening Joe with violence, strange noises in the house, and some rumblings of the past inhabitants of the house next door having belonged to what might be seen as a cult. Despite Joe’s budding friendship with Police Chief Darrell Copeland, and some friendly advice from some old clients of his (Sadie and Harold Hawkins), Joe and his family seem to have found far more trouble than they would have ever imagined.

What I really like about The Nightmare Girl is how it keeps the reader guessing. It starts slowly, not in a boring way, but after the initial shocking events it gradually builds, delivering equal parts familiarity and suspense – we get to know the family by not only watching them live, but also by seeing how they deal with the adversity thrown at them. In the process, we also get scared. Are we dealing with just your run of the mill crazies, or is there something more here, something supernatural? Should we expect ghosts, or the devil, or a raving-mad cult with torches and pitchforks? So many stories and movies end up being described as showing what really goes on under the peaceful veneer of quiet suburban life, but I think this novel really exemplifies not only that sentiment, but so much more.

Janz’s strengths as a writer come across clearly in two distinct areas of the novel. As a whole, he gives us a truly riveting, scary story that winds its way between a Rosemary’s Baby feel, into Helter Skelter/Jonestown-type territory, and even delivering some blood and guts with an action-packed conclusion. And he manages to do all of this very effortlessly, skillfully, keeping those familiar stories in the backs of our heads while showing us a completely new side of them. In addition to this strength, he draws us in even closer, tightens his grip on our hearts, as he shows the true love of a family. This book is dedicated to his three year old daughter, and I couldn’t help but think of that as I read the interactions between Joe and Lily. These weren’t family dynamics a writer researched on the internet, these were real, it felt like a real father and daughter. And that display, throughout the book, makes the reader care that much more, makes us that much more invested in the well-being of our protagonists.

The Nightmare Girl is a fantastic novel that I can’t recommend highly enough. There’s a reason people in the horror fiction community are raving about this Jonathan Janz character, and this novel is a prime example. He brings a smooth writing style, never too wordy to slow you down, but with well-crafted sentences that allow the reader’s imagination to wrap them up and see for themselves. This book is scary, it’s tense, and it’s a lot of fun. I can’t help but drink the kool-aid here.