Home | OPEN WINDOWS Picks up the Pace in UpComing Thriller

OPEN WINDOWS Picks up the Pace in UpComing Thriller

Written and directed by Oscar®-nominated horror legend Nacho Vigalondo (Timecrimes, The ABCs Of Death, V/H/S Viral), Open Windows arrives on Blu-ray and DVD January 27 from Cinedigm (NASDAQ: CIDM). Marking Vigalondo’s English-language debut and starring fan favorite Elijah Wood (Maniac, The Lord of the Rings franchise) and former adult star Sasha Grey (The Girlfriend Experience, “Entourage”), the “latest mindbender from Spanish genre trickster” (Variety) follows a super fan who is offered the chance to get “close” to his favorite B-movie actress by a mystery hacker, which unfolds almost entirely through the various windows on his laptop.

Elijah Wood And Sasha Grey Star In The Fast-Paced Thriller – Available On Blu-ray And DVD January 27, 2015

Obsessive fan Nick Chambers (Wood) thinks he’s in luck when he seemingly wins a date with his favorite Hollywood actress, Jill Goddard (Grey). However, while waiting for his date to begin, Nick receives a call from a mysterious man named Chord (Neil Maskell) who says the date has been cancelled. Instead, he offers Nick a strange opportunity: the chance to view the starlet at all times via her computer. Nick agrees to the proposal, but soon finds himself running from a web of lies, blackmail, kidnapping, and possibly even murder.

The Open Windows Blu-ray and DVD collections are packed with pulse-pounding bonus material, including the making of Open Windows and a visual effects reel.

When Nick (Wood) discovers that he’s won a dinner date with his favorite star Jill Goddard (Grey), he’s incredibly excited to finally get the chance to meet her. That excitement deflates when Jill refuses to honor the contest and all of Nick’s hopes are dashed. He’s intrigued when Chord (Maskell), a man claiming to be Jill’s campaign manager, offers him something he can’t quite refuse, the ability to constantly view Jill via computer. Nick is initially reluctant, but is finally persuaded, unaware that this decision will put both Jill and him at risk. 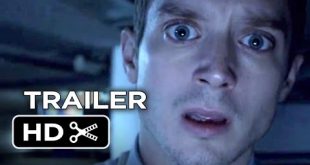