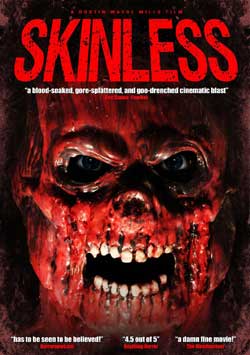 Oncologist Peter Peel discovers a possible cure for cancer in an exotic parasite. When he tests his cure on himself, a monster is born.

Skinless (aka The Ballad of Skinless Pete) is a movie that really surprised me with how much I liked it. It’s not that I expected it to be bad, and it’s not like I haven’t enjoyed previous work by director Dustin Mills (Her Name Was Torment, Zombie A-Hole, The Hornet’s Sting and the Hell It’s Caused, to name just a few). Where I expected a pretty cool low budget horror movie, instead I got a really well done, intelligent horror movie that managed to take a familiar idea and make it seem brand new again. And it’s all done with a low budget and a small cast. I’ve said this about other movies and filmmakers as well, but Hollywood could probably learn a thing or two from a movie like Skinless and a director like Mills.

The plot of the movie is similar to that of the scientist goes mad in the process of doing something good; in this case, researching a cure for skin cancer. And so we meet Dr. Peter Peele (played by co-writer of Skinless and veteran of Mills’ films, Brandon Salkil), a brilliant doctor who is more than a little socially awkward, and his experiment, the fascia worm. This worm is a parasite that eats human flesh, but Pete is fairly certain he can “reprogram” it in a way that will cause it to focus more on cancerous cells. This is a project that he has been working on for some time with his roommate, Dr. Alice Cross (played perfectly by Erin R. Ryan, no stranger to the independent horror scene herself). This is also a project that means a lot to him due to the fact that he has recently discovered his own cancer. So when Neil (Dave Parker) turns down their request for funding, Pete takes matters into his own hands. No, not by finding illegal ways to raise the money needed for research, but by doing the research on himself.

Skinless will no doubt remind some people of Cronenberg’s The Fly, a fact that the writers are comfortable with, even having the main character do something gross (which you will have to see for yourself) and call it “Goldbluming.” At first, Pete is met with great success, his skin cancer is gone completely. But after a couple more days, he realizes something has gone wrong, and as more of his flesh falls from his skin, he feels the need to become a recluse. He also feels a new hunger, one that seems to be driven by the fascia worm’s desires. Soon, no one is safe; not his girlfriend Olivia (Allison Egan), his roomie Alice (a girl, by the way, who he has had a crush on for some time, a fact that soon rises to the surface), and least of all, Neil, the man who refused to help him.

The story is cool, a bit of a love story mixed in with all the gore, and the acting is well done, but it’s the effects in this movie that impressed me the most. You have only to look at the cover art, or maybe just assume based on the title, that there will be Skinless people in this movie. Once the enzymes from the worm get into Pete’s system, he loses all of his skin (well, except for his face, which he wants to keep and so cuts it off himself). So we’ve got a guy walking around without flesh, and it doesn’t look cheesy or cheap. It looks cool and it was done on the cheap (no offense to Hellraiser or Cabin Fever, but it doesn’t take millions of dollars to create that fleshless look). And there are other gore effects that are just as good, including a couple of nasty murders that leave us with a lot of blood. There’s even a puppy that gets experimented on, later becoming a beast reminiscent to that zombie dog from Return of the Living Dead (or the rat monkey from Sumatra in Dead Alive).

Dustin Mills has put out twelve movies over the past five years, and no doubt has a whole bunch more in progress as we speak (at least one or two that I have seen details of). Along with a low budget, a great imagination, and a handful of repeat actors, he’s making quite the name for himself in the independent horror scene. After seeing Skinless, I’m inspired to go out and find more of his movies. This was a lot of fun, and I look forward to more. Definitely recommended to anyone who likes fun underground horror.