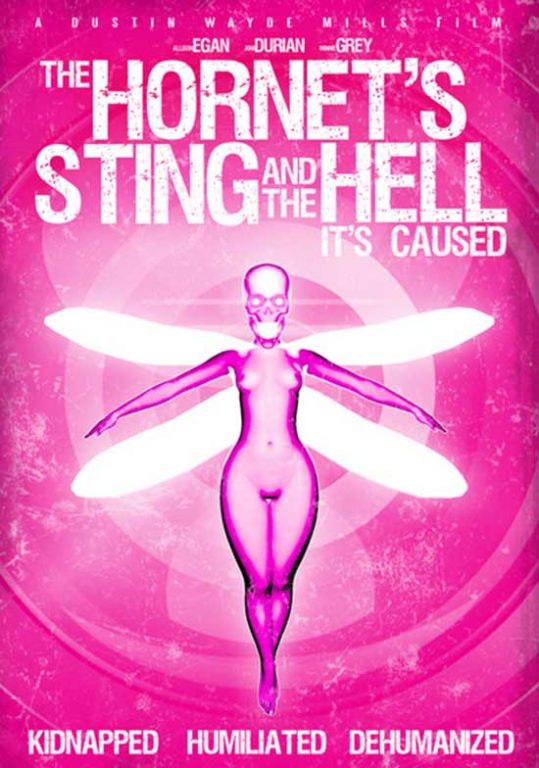 An inconspicuous keen connoisseur of debasement and hardened bondage specialist executes innocently eager models for profit, nevertheless, her latest quarry won’t go down without a fight.

The Hornet’s Sting and the Hell It’s Caused (2014) is a bare-bones, stripped down, shot on video slasher film, featuring a minimal amount of settings and focused on very few characters.  This will come as no surprise to fans of writer/director Dustin Mills (Her Name Was Torment, Skinless, Applecart, etc), as so many of his films do work with a skeleton cast and crew and a small budget, and focus the concentration on the disturbing, deranged, and often controversial stories rather than trying to go bigger than they need to. The Hornet’s Sting… might even be seen as a modern day, female-empowered take on Michael Powell’s classic proto-slasher, Peeping Tom (1960). 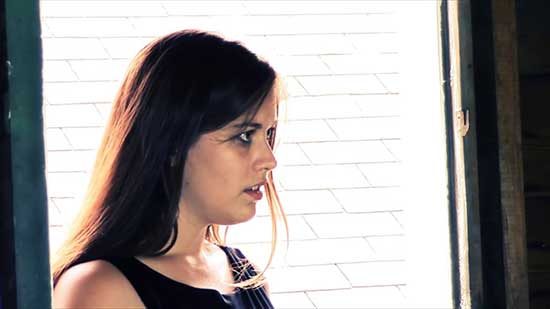 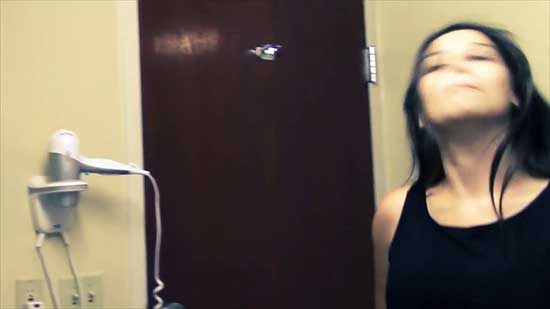 The first fifteen minutes of The Hornet’s Sting… lay out, without much doubt, exactly what this movie is about. A woman is being interviewed about who she is and why she wants to be a model, and as she gets overly warm and flustered, we realize she’s been drugged. There are a number of quick shots of previous “models,” both male and female, in various stages of undress; some are bound, mouth taped, wearing a dog collar, while others have physical pain inflicted on them, crosses carved into foreheads and cheeks torn open with scissors. But when all is said and done, the subjects all end up the same: shot dead, their corpses photographed by their killer. So when we eventually meet Freya (Joni Durian; Applecart, Babysitter Massacre), we already have an idea of the end she might face, but we can’t possibly begin to imagine the depths of horror waiting for her in the meantime. 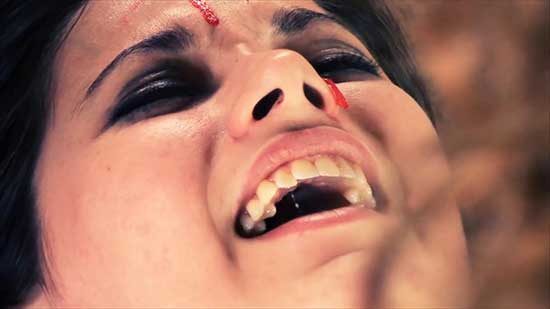 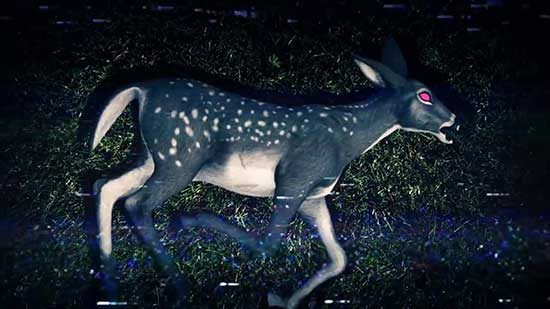 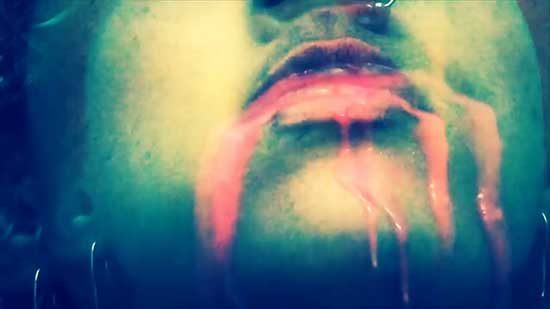 One of the highlights of The Hornet’s Sting and the Hell It’s Caused is the antagonist, Rose, played by the beautiful Minnie Grey (unfortunately, the only other film she’s been in is Easter Casket). Part of this, of course, is thanks to filmmaker Mills’s input – he wrote a creepy, realistic, subtly maniacal character. But Grey takes over as Rose, combining sexy and sadistic in a way that I imagine would make Dyanne Thorne’s Ilsa proud. One moment, she’s commiserating with Freya, hanging out on the couch and talking about life, and it’s completely believable. The next, she’s putting a leash on Freya and stapling vile notes to her nude body and carving a cross into her forehead, and all of this is completely believable as well. But the pinnacle of the character is when Rose tells Freya her story, how she had a good childhood, and was an award-winning photographer, then later tells her manager on the phone that she prefers to shoot guys because it’s easier to believe that they deserve it. All of this forces the audience to ponder the reasons behind the torture and evil and to answer for that little bit of us that wants to root for her, if only the situation were different. 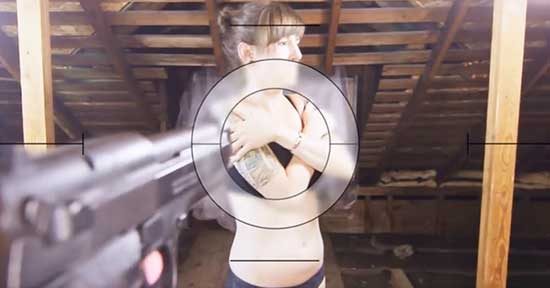 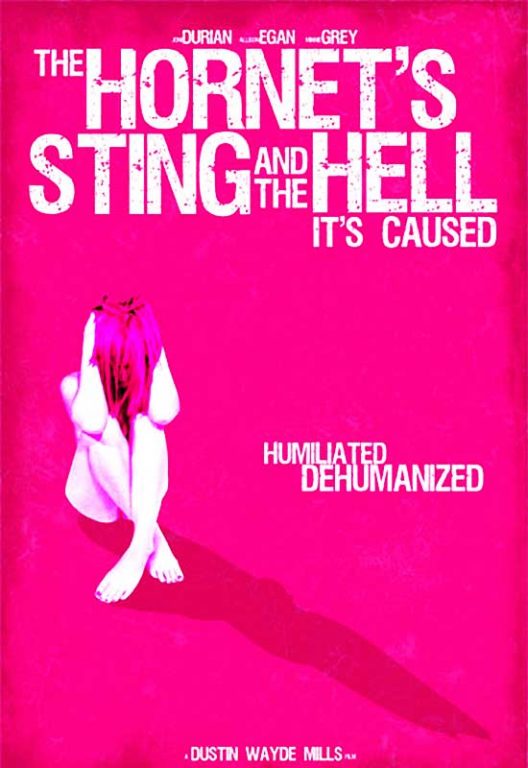 Grey is great as the villain, but let’s be clear: Joni Durian as Freya is no slouch. She plays a sweet and somewhat reserved woman who thinks she has met up with a nice girl, but soon finds herself stripped nude and cuffed and put through absolute hell. Remember, this is essentially a two-woman show, so Grey and Durian have to play off each other for the characters and the story itself to work. The audience feels for Freya, and wants her to survive, to somehow break free, but as time passes it looks more and more like that isn’t going to happen. Durian makes it very easy to care about Freya, which is a credit to her performance. 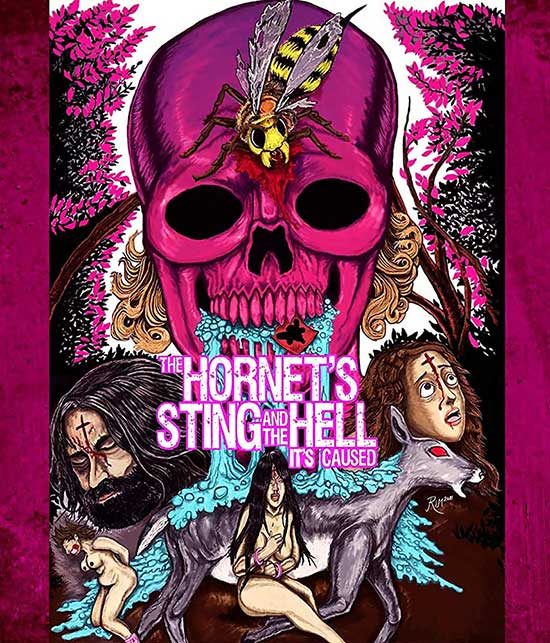 Dustin Mills has a way of making the disturbing sexy and the sexy disturbing, the ugly beautiful and the beautiful ugly. He has a vision that is rare in the low-to-no budget horror field. His films look good, with an artistic quality about them, often times with very strong writing, and The Hornet’s Sting and the Hell It’s Caused is no different. Much like Her Name Was Torment, this is a stripped down (in more ways than one) story that pulls the best out of its small cast to create a memorable, if not upsetting, story. A must see for fans of artsy, rule-breaking, low budget horror as well as everyone who happens to find nude women in scary masks extremely sexy.