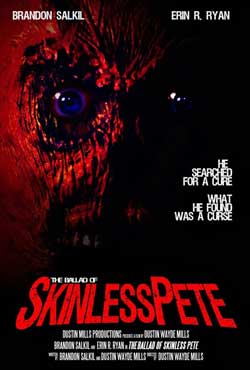 Dr. Peter Peele has just discovered what he believes to be the cure for cancer. Unable to get funding to further his research and against the advice of his friend Dr. Alice Cross, he decides to test it on himself. Although initially effective, the cure has some unfortunate side effects that turn him into a flesh eating monster.

If you’re a regular reader of my reviews then you know that in the past I’ve proposed that laws should be enacted to keep people who just happen to have a decent camera and a couple of friends who have the weekend off from attempting to make films. I respect the fact that they’re trying but some people just don’t have a friggin’ clue on the basics of film making, let alone all of the other orders of business that go along with it. But they’re still out there, thinking they’ve got the next big thing and (thanks to my extremely spiteful boss) I’m the one who usually gets the honor of having to sit through their works of art here at Horrornews.net. So you could imagine my trepidation when I got a copy of The Ballad Of Skinless Pete in the mail! Although I loved the title I’ve been hoodwinked by great titles in the past before (Night Of The Naked Dead…Ugh), so I popped it into my DVD player expecting nothing but pain for my eyes & ears. But 80 minutes later I had a big cheese eating grin on my face! Director Dustin Mills has once again somehow managed to take what can be charitably described as meager resources (Est. $2000 budget) and made an exciting movie that you shouldn’t pass over. 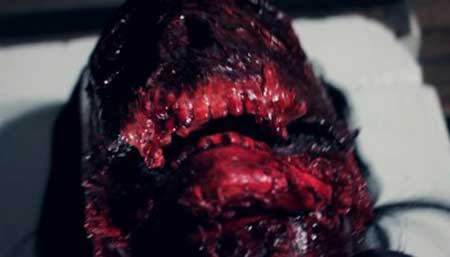 Brandon Salkil plays Dr. Peter Peele, a young scientist who’s been working on a cure for cancer with his partner Dr. Alice Cross (Erin R. Ryan). Early in the film we immediately get the sense that while Dr. Peele is a genius, he’s also something of a loner. He also suffers from a large cancerous lesion on his shoulder. He works in general solitude without interference from anyone & shuns most human contact save for Dr. Cross and the occasional sexual encounter. One day he comes upon what he thinks is a cure for cancer and tries to get funding to further his research and present his cure to the world but he runs into closed doors and in a fit of despair, he injects himself with his cure… The following day his cancer is gone without a trace! Understandably excited, he makes calls to Dr. Cross & an investor, Neil (Dave Parker), demanding that they come over and witness his breakthrough. 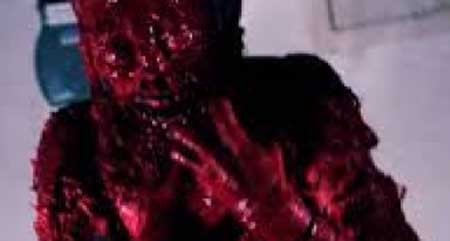 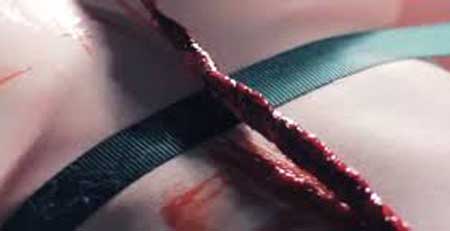 But all is not well. The flesh eating parasite that was the basis for his research and his cure brought some unfortunate side effects along with it that Dr. Peele was not prepared for. His flesh begins to slough away and he develops an insatiable hunger for human flesh because ingesting flesh helps stave off the transformation. This of course doesn’t bode well for anyone unfortunate enough to be lured into his home! From this point on the film turns into a micro budgeted pseudo remake of Cronenberg’s “The Fly”, with the expected gross out effects and (surprisingly) a pretty tender relationship anchoring the film.

Salkil isn’t gonna win any awards for his acting, he’s a bit too earnest & melodramatic at times and as he’s in nearly every scene of the film his performance began to wear on me just a bit. But he’s still effectively manic and has a few moments where his emoting doesn’t overwhelm the script or his co-star. Erin Ryan is really the star of the film, she gives a grounded and realistic performance. Her acceptance of Peter as a friend and her rejection of him as a lover is a thin line to stay balanced on but she manages to maintain an even keel and is extremely likable in the role. Both actors have some scenes in which they’re completely nude but they play them very naturally and at no time do these scenes feel gratuitous or forced. 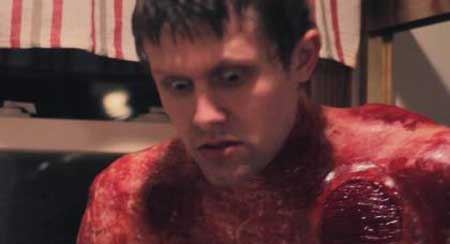 The script (Written by Mills) isn’t trying to be anything more than it is and I mean that in the best possible sense. It’s simple and direct and doesn’t waste much time getting to its central conceit, but that doesn’t mean that it doesn’t have any problems either. It does feel a bit rushed at times and the end of the film felt incomplete but the key special effect moments are both intense & gory and are integrated into the film organically. They’re not just there to show off any fancy special effects work, they’re there to illustrate the horror that Dr. Peele is going through and the disgusting things he has to do to survive. Mills succeeds in tossing the red stuff all over the place and if you’re a real gorehound you’ll appreciate the scope of the effect work. It isn’t always successful but Mills hits his target nearly all of the time and you won’t be disappointed at any of it.

The Ballad Of Skinless Pete is something of a minor miracle. What Dustin Mills has accomplished with $2000 is something that has to be seen to be believed! It only has a cast of four people? So what! It essentially takes place entirely in one room? So what! Some of its gore effects look a bit too realistic? So what! This movie gets right to the point and while the blood really starts flowing, it never forgets the relationship between Peter and Alice and it recognizes that the power of the script comes from the evolution of that relationship. And since Peter and Alice are the only two characters we see after the first 20 minutes, it’s important that their relationship is strong and interesting enough to carry the film to its conclusion. Dustin Mills succeeded in accomplishing all of these wondrous feats and pulls it all off with aplomb. 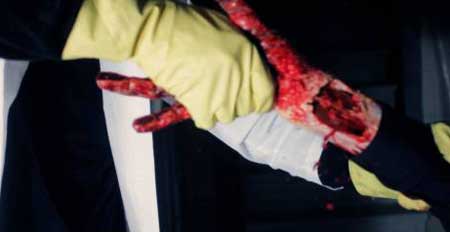 I just wish someone would give Mills $100,000 and tell him to go make any movie he wanted to. He’s a seriously talented filmmaker that cam make a $2000 flick look like it cost 30 times that amount. Imagine what he could do with a six figure budget? The mind reels at the possibilities….