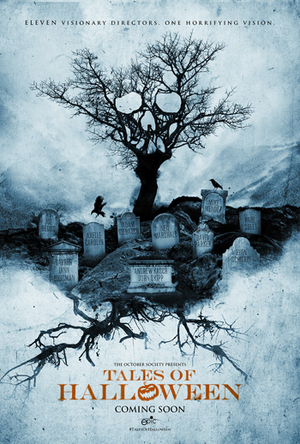 “I’m delighted to be included with so many filmmakers I respect and admire,” said Mckee”. “The anthology format shows how pliable the horror genre is. Each artist on this project is stretching the possibilities to their limits. For die-hard horror fans and general audiences, this is sure to be an evergreen title for many Halloweens to come.”

Currently in production in Los Angeles, Axelle Carolyn created the concept and brought the filmmakers together for this unique production.  Tales of Halloween is being produced by Patrick Ewald and Shaked Berenson of Epic Pictures Group along with Mike Mendez and Axelle Carolyn.

“We are more than thrilled to have Lucky round out our team of talented directors for Tales of Halloween,” said Epic Pictures Group CEO Patrick Ewald.  “Lucky will share his unique point-of-view to the project that will be exciting to audiences of the horror genre.”

Ten stories will be woven together by their shared theme of Halloween night in an American suburb, where ghouls, imps, aliens and axe murderers appear for one night only to terrorize unsuspecting residents.

The directors have created a manifesto with rules to create their films based on the values of Halloween night. The antithesis of the Dogme 95 manifesto, the directors will not be frugal with special effects, props and musical score, and have already attracted notable talent in the horror genre, such as composers Frank Ilfman (Big Bad Wolves) and Joseph Bishara (The Conjuring).