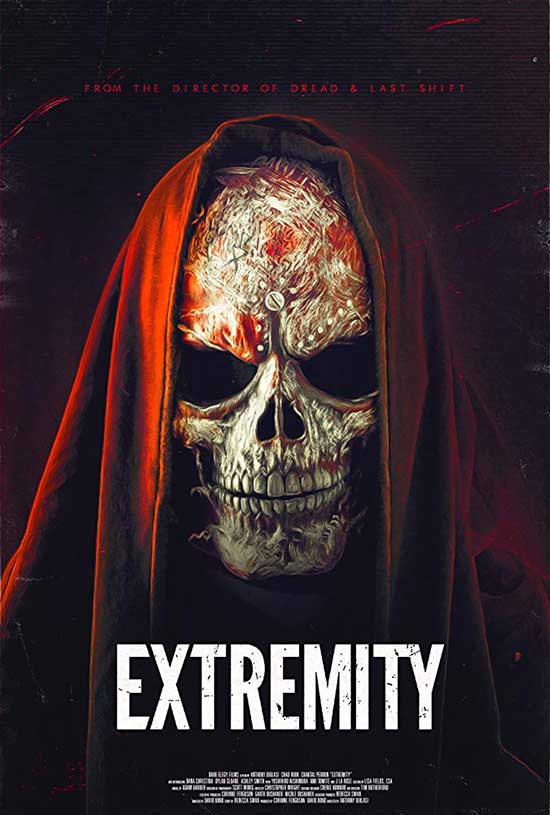 A young woman obsessed with horror subjects herself to hours of grueling torment inside an extreme haunt in an attempt to confront her fears and conquer the tragic past that haunts her.

In less experienced, less capable hands, a horror movie based around an extreme haunt has a high potential of crashing and burning. Picture it: a secretly sadistic sociopath, no doubt wearing a clown mask (what else?) and hurling misogynistic and homophobic taunts, kills off a group of pretty young adults one by one in a haunted house, only to reveal himself as a former classmate who never got invited to hit the beer bong on spring break. The trailer could feature a bunch of quick cuts of maybe-creepy stuff, then a huge spoiler (as they always do), all set to an even slower, more melodic version of Radiohead’s “Creep” played on a toy piano. Thankfully, 2018’s Extremity is the exact opposite of all this nonsense, providing the audience with plenty of terror and dread alongside a tight overview of what extreme haunts are like, and asking some unexpectedly tough questions along the way. 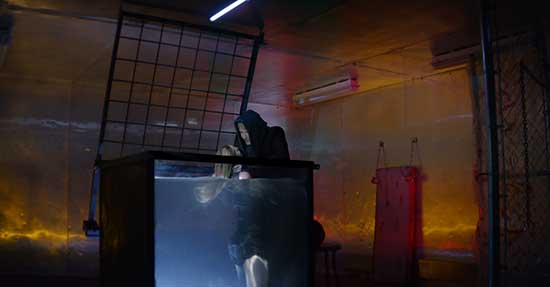 Directed by Anthony DiBlasi (see also Dread, Most Likely to Die, and Last Shift) and written by Rebecca Swan (Fred Vogel’s The Final Interview and John Carpenter’s entries to the Masters of Horror series, Pro-Life and Cigarette Burns) and producer David Bond, Extremity follows Allison (Dana Christina in her feature film debut; see also Wynonna Earp), a young woman with a lot of past trauma resting heavily on her shoulders. She’s been through therapy, but still finds herself inadvertently sabotaging her relationships and harboring anger and desire for self-harm. So she decides to test out Perdition, a famous “extreme” haunt that pushes people to their edge, her hope being that it will force her to face her inner demons. The film begins with her arriving at her destination, a rundown building of some kind, and meeting Zachary (Dylan Sloane), the other person who will be going through the house at the same time. Things go bad very quickly, after being ordered to pull masks from a full toilet and then being shoved into a van by people in ski masks…but that’s how it’s supposed to go, right?

Extreme haunts have become an underground sensation, with people pushing themselves to see how much they can withstand. At these haunts, there are essentially no rules: the “actors” can touch you, hit you, scream at you, and worse. This, of course, puts a lot of ideas and assumptions in a curious mind, some wildly far-fetched and some closer to accurate. Extremity puts some of the answers on screen while also asking other questions. What kind of people would want to volunteer themselves to go through this? Allison and Zachary are two possible answers, and Allison’s character is developed fairly well, as we see some of what she went through as a child and what it has turned her into. We learn these details as we move forward through flashbacks, a technique that helps us feel closer to the character while still allowing for surprises later on. 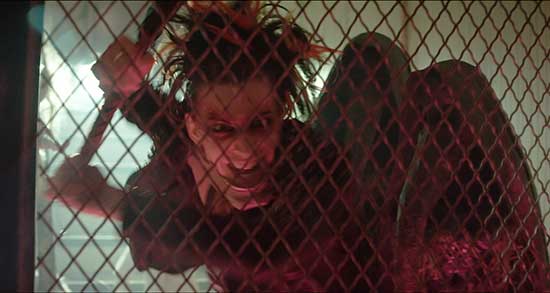 One of the strong points of this film is the writing of the characters, many of whom we meet when we ask the flipside of the previous question: What kind of people would work at an extreme haunt? To aid in our learning, a film crew from Japan is also there (cameraman Yoshihiro Nishimura, director of Tokyo Gore Police and Meatball Machine Kodoku, and also did effects work here, and Konishi, played by Ami Tomite; see also Sion Sono’s Tag and The Virgin Psychics) making a documentary about Perdition. We meet a military veteran who uses the haunt as therapy (J. LaRose), a special effects artist (Paul Braaten), a couple of sisters who are trying to create a better life for themselves (professional Muay Thai fighter Kelsey Andries and model/actress Ashley Smith, who brilliantly and beautifully pulls off a nice combination of Sherri Moon Zombie’s Baby Firefly and Harley Quinn), and the head of the whole thing, Bob (Chad Rook), aka Red Skull, who has the same type of motives for putting on the extreme haunts as the people who sign up to go through them do.

Extremity goes back and forth between flashbacks showing details of Allison’s life and the current scenes of her (and Zachary) being put through hell. Allison is put in a peep show booth featuring a very A Clockwork Orange/Ludovico technique-like rotation of a sexy woman (Jen Znack) touching herself and a skull-faced actor beating on Zachary, all the while told to pleasure herself or Zachary gets hurt more. She is locked in a tight coffin; she is chased by a dog; she is even waterboarded. And these are the “easy” things she goes through; it only gets rougher. All of this begs the question: How much is too much? And what happens when that line is crossed?

Equally as important as the well-written characters and ideas of terror Allison is put through is the look of everything on screen. DiBlasi brought in a great team for makeup and effects, including Marcus Koch (work can be seen on many of the American Guinea Pig films), Tracy Falukozi (see Still/Born and Ryan Nicholson’s Famine), Ashly Mckessock (her work will hopefully soon be seen in The Profane Exhibit), and of course, Nishimura (see The Machine Girl, Cold Fish, Stop the Bitch Campaign, and so many others). There are also a wide variety of masks on display, and credit here goes to the late Simon Sayce, the creator of the Hellraiser puzzle box. Thanks to all of these behind the scenes wizards, Extremity is able to approach the audience on multiple levels, engaging them in a film that can still be enjoyable on multiple viewings.

DiBlasi proved his ability to skillfully put a growing terror on screen in both Dread (based on the Clive Barker story from Books of Blood) and Last Shift, but with Extremity he takes it to a higher level. Not only are we drawn to the edge of our seats, but we also find ourselves confronting our morality while becoming more and more invested in the characters. There is not necessarily a “good guy” and “bad guy” here, and so it becomes difficult when we instinctively look to pick a side. Combining a deep, well-written story with fleshed out characters with a blood and gore horror setting can often prove to be a difficult task, but there is a new crop of horror filmmakers who have found a way to do just that. Anthony DiBlasi is one (of many) to watch. Highly recommended for anyone who loves horror movies with real characters.