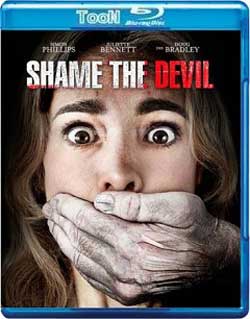 When a London detective finds his murder investigation becomes a little too personal he travels to New York for answers in this Truth or Die chiller.

The subgenre of satanic based horror has been prevalent since the dawn of scary films. There’s something about the religion based conflict of ancient good versus evil that resonates with a vast audience often on a very personal level. We have a near innate need to possess some sort of belief in the afterlife. The potential chilling consequences of reaping what we sew is arguably the most horrific of fears one can fathom.

Director Paul Tarter does an exquisite job of creating an instantaneous tone of dread and despair. The eerie alarms, blurry images and rapid cuts of foreboding are reminiscent of the Saw series. The viewer is dropped straight into the fray of high tension. Ratcheting the nerves up a notch one cannot deny that we can safely expect the unexpected. The game of honesty versus lie many will relate to on varying levels. A very primal darkness within is evoked as the mantra, “The truth shall set you free,” is spawned. All of this manages to captivate the viewer before the opening credits roll.

In a borderline oversaturated genre its paramount for the director to lure the audiences’ attention and keep it there. Tarter manages to intrigue us further into the abyss of the plot. Images of the messiah and torturous artifacts are creepy as hell along with a grungy type dialogue that manages to heighten the tension even further.

The initial crime scene creates an aura of squeamish unease. At first glance the plot seems to be taking a direct carbon copy of so many other crime/Satanist related fanfare. Shame the Devil manages to exploit the subtext further as excerpts of bible passages accentuates the suspense factor while breathing an air of authenticity to the viewer.

For the most part the characters are likeable and well portrayed by the cast. We get behind their performances relish in their flaws and compelled at their tenacity to rise above the grisly adversity. The second instance involving the doctor is highly imaginative and keeps the audience guessing what may unfold next. We get a firm grip on what the killer’s MO is and are collectively spellbound by his heinous intentions.

The overall theme of truth creates another form of conflict between the main characters detective James Trent and his wife. We begin to question if James is capable or worthy of unraveling the mystery of the steadily rising body count or if he too will fall prey as a result of his sinful past.

Of course every religion based terror seems to have a fallen Catholic priest. Shame the Devil is no exception. The scene with the father holding confession while desperately attempting to thwart fatal electrocution is pulse pounding anxiety at its finest.

Director Paul Tarter does a phenomenal job of summarizing each of the crime scenes, their victims and sins through black and white flashbacks. For those of us who may get a little lost in plot construction, these scenes seem to beckon to us in challenge to peel back the layers of the investigation and solve the mystery of who ‘s the killer. The bible verses may be the very clue to what inspires the ghastly murderer. After James is reunited with an old flame it seems like all bets are off yet it’s merely foreshadow of things to come.

Actress Juliette Bennett in the role of Sarah is certainly esthetically pleasing to the eye. A testosterone fuelled demographic will no question revel in her performance, further captivated by the moment.

Perhaps the most innovative kill scene is saved next to last. A cab driver is found with a lie detector equipment in his cab. It beckons the audience to alter their perception. Is the cab driver the killer? Or is there something more diabolical at hand? Detective Trent realizes that the killer is taunting him making the killings closer and closer into his personal life.

The final act unfolds in a manner we suspect it may be leading to but unfolds in ghoulishly good grandiose that most won’t see coming. Upon seeing the initial marquee and taking note that Doug Bradley appeared(Pinhead-Hellraiser) I was immediately ecstatic to see his involvement in this production. Sadly he has only a cameo role but manages to up the ante in this hellacious thriller.