A group of friends must confront their most terrifying fears when they awaken the dark powers of an ancient spirit board.

Universal Pictures team up with Hasbro to bring the board game “Oujia” to cinematic life much like Battleship (2013) but with a far reduced budget and an equal reduction of imagination, passion and effort. The resulting film, Ouija, represents everything that is wrong with modern horror. It waters down the horror for its PG-13 rating and its teenage target audience which is far more intelligent than the script gives them credit. The film lazily weaves its tale of five high school class mates investigating the death of their close friend using the dead girl’s Ouija board in attempt to speak to her from beyond the grave. Every scare is telegraphed, every twist and turn predictable, every shock diluted. Olivia Cooke, who is impressive and emotional on Bates Motel, is wasted in the lead role of Laine Morris where her best efforts are lost within the nonsense, the bad dialog and the forced by-the-number genre beats. The film is not scary and, worse yet, it is boring, dreadfully, offensively boring.

The story behind Ouija begins with its lead character, Laine Morris (Olivia Cooke) trying to convince her best friend, Debbie (Shelley Hennig), to join her at the big high school game. Debbie convinces her to go ahead without her returning alone to her room to find the Ouija board she just burned laying unchanged on her bed. Soon she is dead, strung up in the stairwell by string of decorative lights. Her death is ruled a suicide, but Laine finds that hard to believe. As Laine digs into the final days of her friend’s life, she uncovers the spirit board and convinces three more friends and her sister to join her in using it to reach out to Debbie. In a nice touch, they agree hoping Laine can find some closure, to say goodbye. From there the film slowly – say this out loud, “slowly” – unravels a ghost story where the spirits of the now dead previous owners of Debbie’s house are attempting to reach out through the board. One by one her friends encounter the deadly spirits as they try to figure out how to stop the ghosts from killing again. 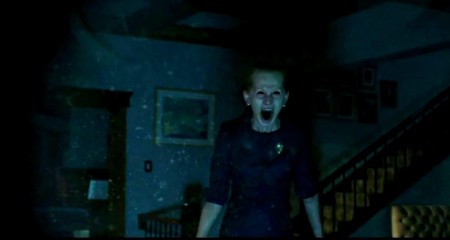 To the film’s credit, the script from Juliet Snowden and Stiles White attempts to add a nifty twist to the stereotypical ghost story, but the foundation of the idea has its own problems and the twists are thinly veiled to begin with. Even after everything is explained it is uncertain why the ghosts are out to kill those they haunt outside the fact that visually, thematically,it places the characters in stronger jeopardy. In the spirit’s own backstory, there is no evidence of the spirits being so deadly – evil and violent, yes; but never murderous. Then there is the purposeful and forced way every adult is removed from the story for an extended period of time. Debbie’s parents go away after their daughter’s funeral leaving Laine to look after their home and Laine’s father quickly exits on a business trip. No other parents are introduced for the other friends. It is a contrived, forced and lazy way of allowing the teens to “Hardy Boys” the investigation without any meddling adult interaction. Bah. 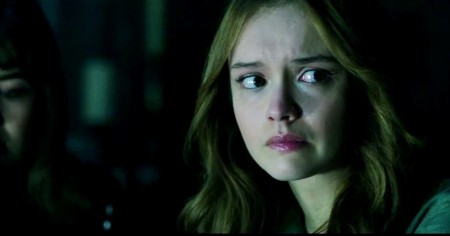 The cast for Ouija is adequate at best, serviceable. There is very little wrong with the actors involved outside some of the ridiculous dialog and poor decisions they have to make. Everyone handles the material as much as they can making for a believable Lifetime channel group of high school friends. Olivia Cooke, fresh off this year’s The Quiet Ones, stars as Laine Morris bringing her lost, helpless, puppy dog eyes to the role in full mode. She brings an authenticity to her sorrow, to the pain of losing her best friend, especially when she shares her regret in never having the opportunity to say goodbye. It is her drive and heartache that allow the story to get away with the repetition of investigating the house again and again. Her efforts, unfortunately, are not enough to draw the audience into the story or fall for the silliness of the devices looking to create scares and horror.

The highlight in Ouija is a pair of scenes that feature Lin Shaye as Paulina Zander, the sole survivor of the original tragedy driving the ghost story. She, as always, is brilliant bringing a disturbingly calm chaos to the screen. Laine finds Paulina institutionalized, locked away in a mental hospital since the death of her sister years ago. Her scenes with Olivia Cooke provide the film with its best payoff both story wise and emotionally. Shaye both chews the scenery and elevates the film all at once. Her story is predictable, but Shaye makes it worth the while. She is the best thing about Ouija and the film makers may have lost a terrific opportunity to include her, and her character, in the closing, wrap-up sequences of the film, especially given the revenge themes of the background story. There are promises made but never delivered.

In many ways, director Stiles White makes the most of Ouija’s five million dollar budget. The film looks good for what it is, a suburban ghost story nightmare. There is nothing offensive about the cinematography nor the composition of the film. Scenes are set up precisely, foreshadowing placed directly where expected. The biggest problem is that the pacing is dreadfully sluggish, often with no payoff. The most telling of this misfire is the epilogue scenes where nothing happens, where every step is played out by the book, beat after predictable beat. White also suffers a weak, ineffective soundtrack where the neither the score nor the sound design work in the film’s favor. He does manage to take advantage of a well decorated set during the film’s climax, but sadly the set up is too preposterous and predictable to achieve the tense effect he is after. The film is full of scenes where White strives to set up a scare but rarely manages to achieve a response. It wimps out or peters out time and again.

Ouija is a strong contender for worst horror film of the year. The lazy, unoriginal, unimaginative script generates snores and yawns with out any signs of screams or white knuckles. Boredom in a horror film is never, ever a good thing. The twists and turns are predictable with only the inclusion of the fantastic Lin Shaye to spice things up. The intended teen audience is far too intelligent to fall for the silliness of the story and its slow reveal. The audience is far ahead of the story from the time the title card appears until its unsatisfying and anticlimactic conclusion. The effects, much like the acting and the directing, are only adequate with very little today’s audience has never seen before. The film has nothing for its combined efforts to rise above every other horror film that proceeded it. The characters, the locations, the ghost story, the twists and turns, even the Ouija board itself are all been-there-done-that drowning in an air of mediocrity and cliche. Ouija is awful, dull and predictable. Goodbye.