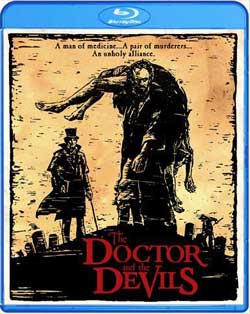 Grave robbers supply a doctor with bodies to test on.

REVIEW: Considering that it was directed by Freddie Francis, certainly one of the greatest minds of my lifetime, I can’t believe I’ve missed this movie until now! Whenever you hate (or love) a film, writing a review for it is always easy. You can blather on incessantly about how great (or awful) it is and all the many reasons why. Interestingly, this film really isn’t worth hating or loving.

Based on the true-life story of Dr. Robert Knox, a Scottish (if memory serves) physician way back in the early 1800’s, the story covers the plight of a crew of grave robbers, some well-meaning doctors and to spice things up a bit, a few English ‘working’ girls. The film is chock-full of BIG names: Jonathan Pryce, Julian Sands….some of my all-time favorites! Heaven knows, the whole lot of them tries as hard as any reasonable person could ever be expected to, given the circumstances, but mostly they just deliver a lackluster product. Sure, it’s cool to look at, and the story is sort of interesting, but I just didn’t connect with it all.

As I said, the sets are positively stunning. Someone spent a PILE of money building them. Early 19th-century anywhere-in-the-UK couldn’t have looked drearier than this (even though we never technically hear the word “London” spoken during the film, I think most Americans would presume that’s where the setting is placed).  Most films with a dastardly roll of villains is pretty much always well-received, but I’m not too confident this one received widespread distribution, as it’s estimated earnings fell well below $200,000(US).

Each of said villains tries real hard to play their part to the hilt, but at the end, I really got the feeling someone could’ve just read me the story, and it would’ve been equally entertaining. It’s an intriguing story, but just not all that moving at the end of the day. The thought, “I bet this little trade could easily lead to murder,” entered my mind early in the film, and sure enough, that was an omen of things to come! That whole nasty business pretty much comprises Act 2 of the film and we get to see just how dark and dirty the ‘cadaver business’ could get in the 19th-Century. As you might guess, the two villains, Fallon and Broom, fall down a pretty dark hole. They start plying various homeless folk with gin and what-not and after taking them back to their quarters, well…simply murder them. The good doctor is quick to declare that he is neither a scientist, nor a moralist and willingly purchases the “fresh” specimens.  Timothy Dalton’s expository blathering about science and the study of anatomy is heart-felt but got a bit tiring after a short while. 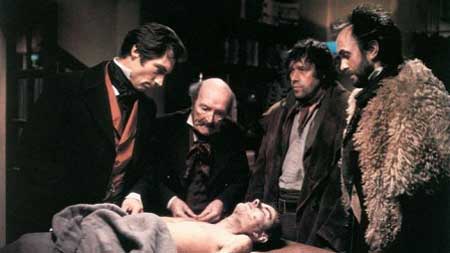 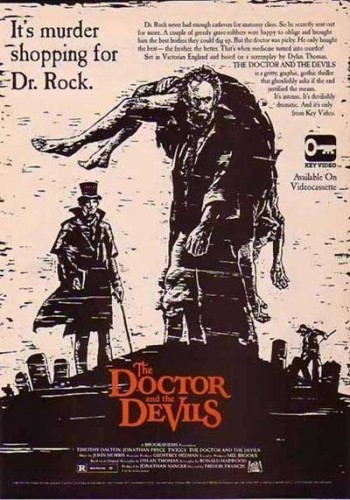 There’s a somewhat charming little sub-plot involving a rosy-cheeked young medical student falling madly in love with working girl, Jenny (played by the lovely Twiggy of 60’s-era pop fame).  That little bit takes some twists and turns that ultimately provide a smidge of entertainment scattered about, but overall I just couldn’t really get a good vibe going for this one. It’s a little creepy and watching people get smothered is certainly unsettling, but it’s just not that scary. The good doctor, of course, manages to work in some criticisms of ‘this damn city’ in the ways in which it treats the poor and homeless and we’re forced to listen to a few of his sermonettes on the topic, and Dalton does a stellar job of doing what he can with his material, (a bit of over-acting here-and-there notwithstanding) but again, it’s all just fairly unmemorable.

At the end of the day, I’ll give this one 2 coffins out of 5. If you’re studying set design (or any flavor of art or design in any way), yes, check this one out for the period scenery and props, but other than that, it’s mostly good for sleep-inducing.