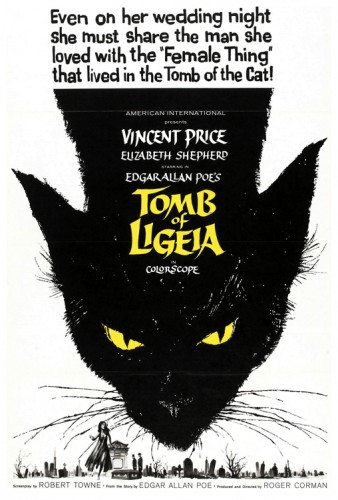 SYNOPSIS:
“Erudite recluse Verden Fell is struck by a meeting with lady Rowena, daughter of country lord Trevanion, who reminds him of his late wife Ligeia, both being somehow associated with a black cat and the wild fox the lord loves hunting. They fall in love, marry and resolve he leave the ruined abbey where he buried Ligeia. However Rowena’s devoted gentleman friend Christopher Gough discovers it cannot be sold as Ligeia was never declared legally dead, making Rowena’s marriage involuntarily bigamous. After a hypnotic session shows Ligeia possesses Rowena, strange things keep happening. Verden relapses in gloom and seclusion, but Christopher gets his loyal old manservant Kenrick to assist in an exhumation. In the abbey, things turn to a spectacular dramatic conclusion for all concerned, yet not quite.” (courtesy IMDB)

REVIEW:
Genre cinema during the early sixties was dominated by the Gothic Costume Drama, in particular the British invasion of Hammer horror films, and the Edgar Allan Poe adaptations from American International Pictures. The Fall Of The House Of Usher (1960) was the first of ten Poe-like films to be produced and directed by my old friend Roger Corman over the next four years for AIP, designed by Daniel Haller and photographed by Floyd Crosby in Pathecolor, a process which emphasised the blue-green end of the spectrum while underplaying the red-yellow end, thus giving the film a ghastly patina. Yet audiences loved them and a number of follow-ups were produced, including The Pit And The Pendulum (1961), The Premature Burial (1962), Tales Of Terror (1962), Tower Of London (1962), The Raven (1963), The Terror (1963), The Haunted Palace (1963), The Masque Of The Red Death (1964) and, finally, Tomb Of Ligeia (1964). 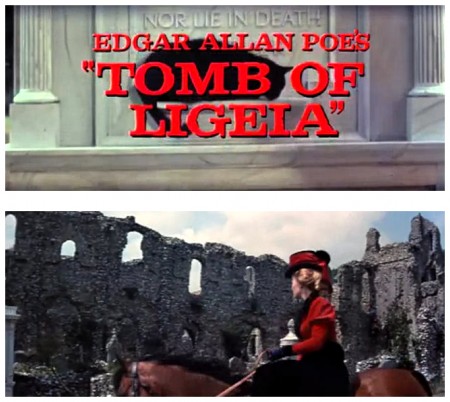 The Raven, being a black comedy, took the critics and the public by complete surprise and out-grossed all of the previous films in the franchise. When the movie was shown to the censorship board they not only approved it, they actually praised it, pleasing Corman no end. But the film’s success cast some serious doubts about the future of Poe at the box-office. Abbott And Costello Meets Frankenstein (1948) had been successful too, but it was the kiss of death for the Frankenstein movies, and there wasn’t another one made for nearly a decade. Corman was afraid the same thing could happen to Poe, and decided to wrap up the series the following year with Tomb Of Ligeia, arguably the best film of the entire series. It has all the prerequisites: a castle, a black cat, a fire, an unburied corpse and an insanely guilt-ridden Vincent Price. 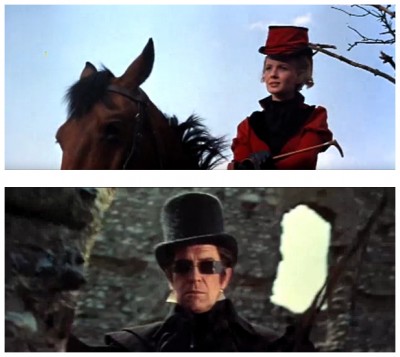 In fact both Corman and his screenwriter Robert Towne wanted to cast Richard Chamberlain in the lead, as they were concerned that Price was too old for a character that was supposed to be in his late twenties. Unfortunately, Price’s casting was a condition imposed by AIP, so Corman was forced to carry on regardless. He put a wig on Price and used more makeup than usual in an attempt to make him look as young as possible. The film takes place in 1821, with Verden Fell (Vincent Price) burying his deceased wife Ligeia (Elizabeth Shepherd) in an English country churchyard when the local parson (Ronald Adam) protests that the ceremony should not take place because the woman was not a Christian. Fell says that his wife will not rest because she’s not really dead and quotes her philosophy: “Man need not kneel before the angels nor lie in death forever but for the weakness of his feeble will.” Suddenly a black cat screeches and Ligeia’s eyes pop open. 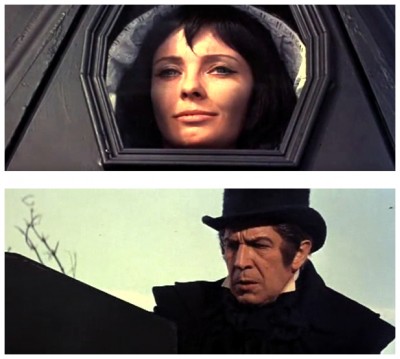 A few months later while on a fox hunt, Lady Rowena Trevanion (Elizabeth Shepherd) wanders into the churchyard and finds herself staring unaccountably at the strange inscription on Ligeia’s tombstone. The black cat hisses, her horse panics and she is thrown. She is carried away by Fell to his vast Gothic abbey, seen by Rowena’s hunting companion Christopher Gough (John Westbrook), who informs Rowena’s father Lord Trevanion (Derek Francis). He comes in with a fox from the hunt which coincidentally was Ligeia’s pet. During their conversation, the fox disappears and Fell suspects the cat may have made off with it. Rowena is attracted to Fell and some days later, as they are about to kiss, the cat darts between them and scratches Rowena’s face. Later it lures her to the bell tower of the abbey where she is nearly killed. 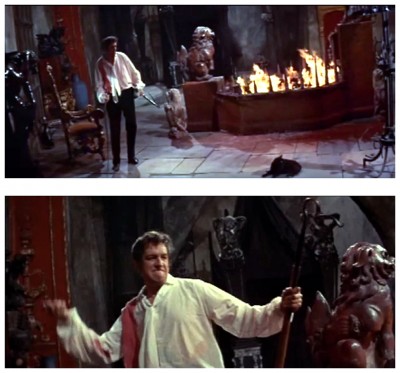 Once again she is rescued by Fell and they eventually marry, but Fell becomes like a stranger to her, curiously leaving her alone at night, and soon Rowena begins having nightmares involving Ligeia and the cat. One night she finds the dead fox in her bed. Gough, hired by Fell to sell the abbey, suspects something is wrong and exhumes Ligeia’s coffin, only to discover a wax effigy in place of a corpse. Meanwhile, Rowena is losing her mind and in her bedroom mirror her image becomes Ligeia. She smashes the glass and discovers a secret passageway which leads to Ligeia’s corpse and to Fell, who is suffering under the delusion that his wife is still alive. Rowena tries to bring him to his senses but he is so confused that he mistakes Rowena for Ligeia and, to rid himself of her sets fire to the abbey, then tries to kill the cat which he believes contains the spirit of Ligeia. Gough arrives just in time to rescue Rowena but Fell is left to die in the flames. 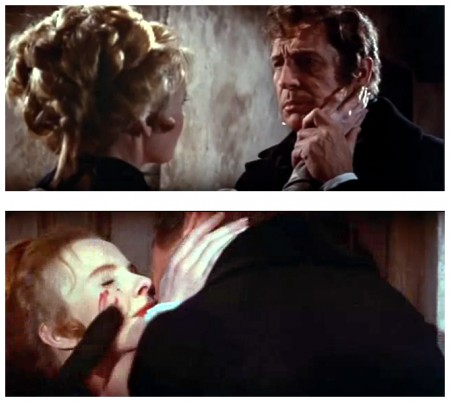 Corman had some trouble keeping track of when actress Elizabeth Shepherd was supposed to be possessed by the ghost of Ligeia and when she wasn’t, and many viewers were equally confused: “I sat down with the script and worked out a chart for myself, saying from page so on and so – you know – from page eighty to eighty-two it is Rowena. From page eighty-two to eighty-five it is Ligeia. So I had the chart so I wouldn’t become confused myself. I think it was partially in the script and that there were too many transitions. We went back and forth so many times that eventually you got lost. It is actually totally correct. If anyone were interested they could stop the film, look at it and run a chart. They could see it all added up exactly correct. However, for me to say that does not excuse the fact that the film itself becomes confusing to audiences.” (Fangoria magazine #12 v.2) 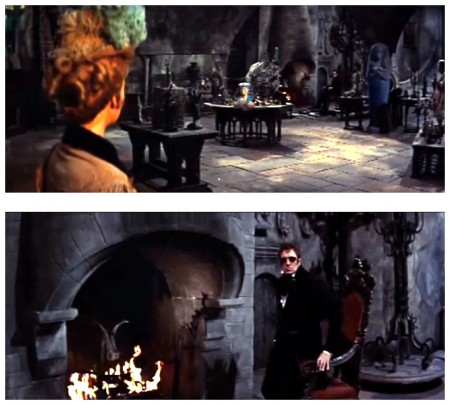 Most of Corman’s Poe films have a subtext in which a place – usually an ancient house, cob-webbed and decaying – comes to stand for all the traps of old memories, sins and regrets. The camera that wanders down the gloomy corridors is effectively tracking through Fell’s un-aired mind: “I went deeply into Freud when I first began interpreting Edgar Allan Poe stories for the screen. Poe was a writer obsessed with symbolism and Freud was the master of symbolism. In fact, Poe’s whole world of ruined sanctuaries, brooding trees, cawing birds, cats, deaths and funerals was a symbolic one. As an American obsessed by Europe’s decadence, he was himself symbolic of America’s long regretful farewell to the Europe it wanted to believe was all evil.” 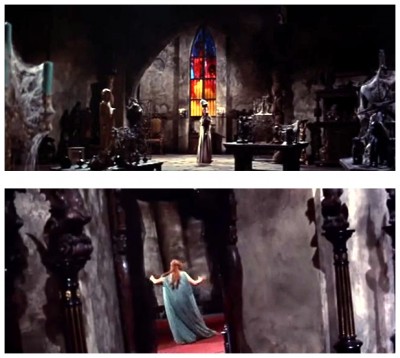 In fact Tomb Of Ligeia is an ideal example of how, in the Poe horror films, Corman managed to disguise the fact that nothing really happens until the very end. To fill-in time, he has plenty of shots of the black cat scurrying about, shock images, characters walking through the castle, red herrings, and Price looking worried or depressed, sounding ominous whenever he says even the most trivial bits of dialogue: “Not ten minutes ago I tried to kill a stray cat with a cabbage, and all but made love to the Lady Rowena. I succeeded is squashing the cabbage and badly frightening the lady. If only I could lay open my own brain as easily as I did that vegetable, what rot would be freed from its grey leaves?” 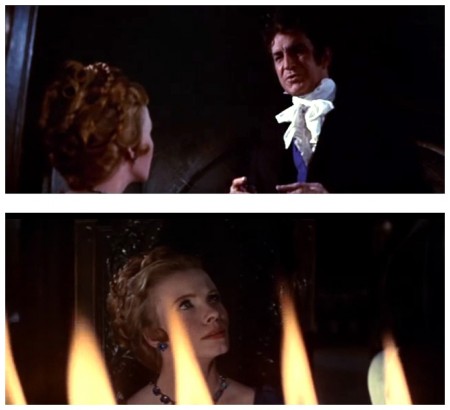 Contemporary critic Howard Thompson said at the time of the film’s release: “Mister Corman at least cares about putting Mister Poe – or at least some of the master’s original ideas – on the screen. If they are frankly made to be screamed at, they are not to be sneezed at. Mister Price still hams it up, front and centre, but these low-budget shockers generally evoke a compelling sense of heady atmosphere and coiled doom in their excellent Gothic settings, arresting color schemes and camera mobility. Mister Corman has made stunning, ambient use of his authentic setting, an ancient abbey in Norfolk, England, and the lovely countryside. The picture is not nearly as finished as The Masque Of The Red Death (1964), but the Corman climate of evil is as unhealthy and contagious as ever.” 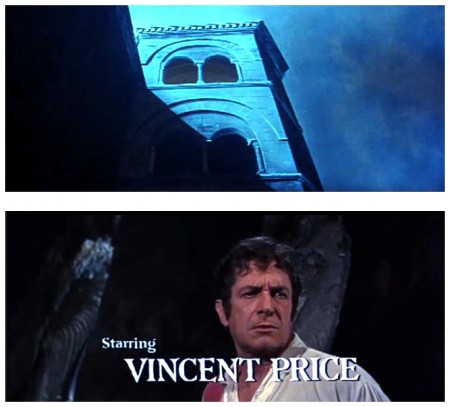 Corman later admitted, “All of the Poe films made money, but Tomb of Ligeia made the least amount. I think it was because the series was just running out of steam and also because it was overly complicated.” The sixties were an exciting time to live and he wanted to try something more contemporary, so Corman went from creating one cinema sub-genre to creating another, the bikie gang movie, with The Wild Angels (1966). Before you have time to digest that crummy nugget of knowledge from a very special source, I’ll quickly say my goodbyes and disappear into the night, but not before inviting you to return next week to sacrifice another ninety minutes of your precious life to witness dark depravities never before realised (well, almost never) with…Horror News! Toodles! 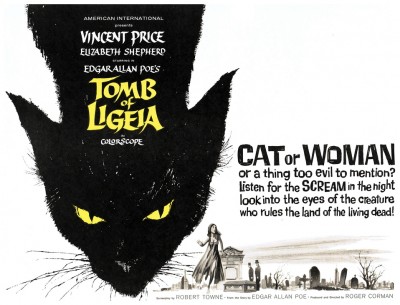