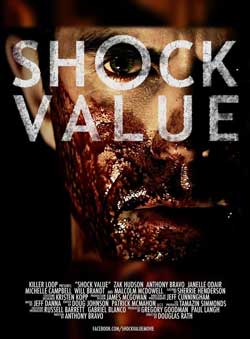 Struggling ‘B’ movie Director blackmails a serial killer to be the star of his next film.

“Shock Value”, A 2014 horror comedy may just be the perfect horror movie fan film of 2014.  Honestly I wasn’t sure what to expect thinking perhaps this may of been one of those over the top visceral films, however things began to lighten up very quickly. In concept, I could easily see half a dozen horror aficionados sitting around proclaiming what may be a great idea for a new film. That idea is exactly what “Shock Value” is. The hiring of a real serial killer to “play” a fictional serial killer in a horror film. 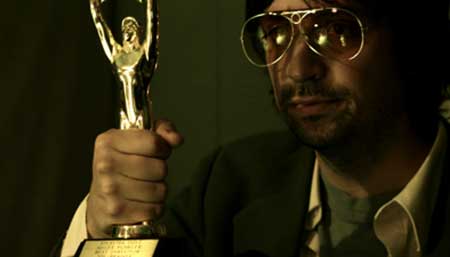 The premise follows a struggling B-grade filmmaker named Miles Fowler (Zak Hudson) who has just received a bogus award for best horror film of the year. His past 14 or so films all have easily fallen into extremely low budget pieces that most of us would laugh over, toss or dismiss. One night while snooping on a couple in mid-park-intercourse he witness a brutal murder that happens right in front of him. This slaying of couples continues as Miles spies on a real serial killer in action.

Miles, who is more concerned with his career than the lives being taken in front of him concocts an idea to break into he killer’s house, steal his murder weapons, some personal belongs and black mail the killer into starring in his next film. Miles accompanied by his production partner Justine (Michelle Campbell) sets out to set up a meeting with the killer. Over coffee he is introduced to murderer Nick (Anthony Bravo) who he forces into starring in his new film by threatening to expose him to the authorities. Nick who now boasts a over 38 kills on record agrees to the terms. 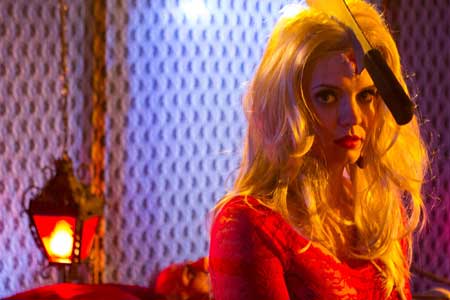 By now you are probably wondering where the comedy arrives? The brilliance here is the dialog exchanges which argue over little things like Nick threatening Miles with a fork when he could haven chosen a knife. Humor echoes in the film production itself which asks Nick to become that which he already is and act the part. Even on a B-grade level horror fans can easily associate themselves with the hilarious notions around low quality productions and the ways that actors take themselves too serious.

As the movie carries on, Nick is allowed to commit the occasional kill promising not to kill the director and his assistant “yet”. This works fantastic when the 3 of them visit B-actor Edmund Dean Huntley (Malcolm McDowell) who tries to convince them that his present day version of Dracula needs a high quality script. Nick who gets moments to “unleash” is befriended in the course of the film as he struggles with trying to actually look good on screen playing the part he is in real life. Its ironic moments left and right with some great interactions between all. The kicker here (and sorry if you weren’t ready for the spoilers) is that Miles is slowly becoming the killer that Nick was as Nick is starting to warm up to sensitivity and friendship. There is alot of misdirection that just simply plays smart and funny. 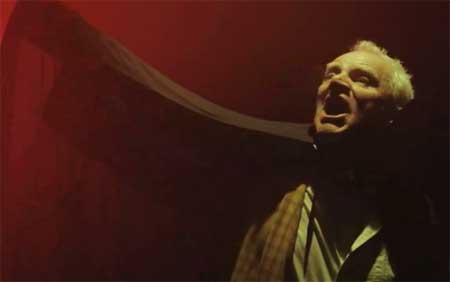 Shock Value is the 2nd feature directed by Douglas Rath who also worked with writer/ actor Anthony Bravo on his previous film “ID”. The movie was filmed in L.A which only adds a perfect setting for its premise. Actress Janelle Odair plays the role of Ashley, one of the stars on Miles B-grade features. The film offers plenty of horror-blood-shedding moments in addition to some appropriately interjected nude scenes. All around its film that simply works on all levels. 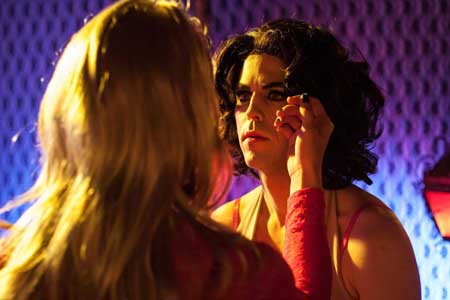 Shock Value has fun with its concept always staying 1 step ahead of the next. I was fully entertained and surprised for that matter that this one snuck under the radar. Written by Anthony Bravo (who also plays the serial killer Nick) “Shock Value” lives up to it genre with a perfect play on the genre. A rewarding and “killer” piece, Shock Value is an homage to its genre.