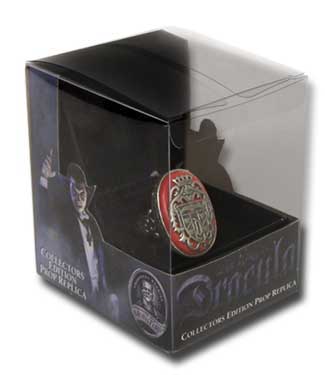 The Ring of Dracula bears the Count’s crest, the hallmark of the classic aristocratic vampire. It has adorned the fingers of some of the most admired actors to have portrayed Dracula in the classic Universal Monsters movies, including Bela Lugosi and John Carradine.

Originally crafted for 1944’s ‘The House of Frankenstein’ the prop ring was then used in a number of different Universal Monsters movies until 1948. A copy of the original prop even found its way to England and was worn by Sir Christopher Lee in a number of his onscreen portrayals of the Count in the 60’s and 70’s. After its film career ended, the original prop was, for many decades, a prized possession of the late writer, publisher and fan extraordinaire, Forrest J. Ackerman.
The Ring of Dracula prop has an unparalleled heritage, steeped in cinematic vampire lore. Like the Count himself the prop has demonstrated an almost immortal resilience. And now mortal collectors can also own this officially licensed piece of film history from the golden age of horror.

Factory Entertainment is offering two high quality replicas of the of The Ring of Dracula, each cast directly from the original 1944 prop:

The Ring of Dracula – Collector’s Edition Featuring an all metal construction and reproduction stone. Size US 10 ¼. Packaged in a presentation box. MSRP $49.99

The Ring of Dracula – Elite Edition Crafted from Sterling Silver (.925) with a semi precious carnelian ‘Bloodstone’. Size US 10 ¼. Limited to just 600 pieces worldwide. Packaged in collector box and includes a numbered certificate of authenticity. MSRP $199.99 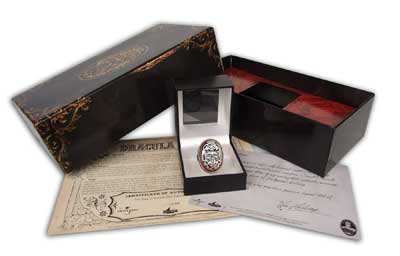 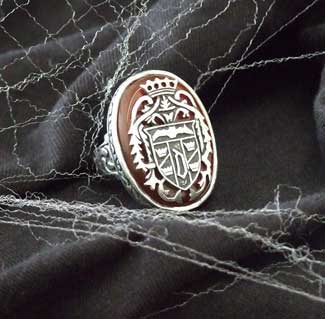 Both replicas will ship in the fall of 2010
For more information visit www.factoryent.com/