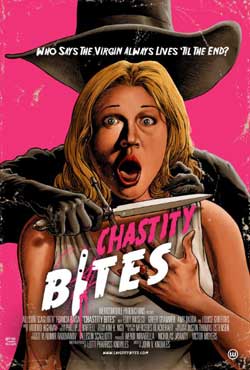 In the early 1600’s, Countess Elizabeth Bathory slaughtered more than 600 young women, believing if she bathed in the blood of virgins that she would stay young and beautiful forever. Still alive today, she’s found a perfect hunting ground for her ‘botox’ as an abstinence educator in conservative America, and the young ladies of San Griento High are poised to be her next victims. But will her unholy ritual finally be stopped by Leah Ratliff, a feminist blogger and ambitious reporter for the school paper

Okay, let’s be straight with each other: Chastity Bites is a confused film. Reading the blurb, I really wanted to like it. It’s a comedy horror with vampires, set in a high school. And hey, it’s got a cameo-ing Stuart Gordon on side as a disgruntled teacher. All aboard for fun time. Unfortunately, it tries to be so many things, when it really feels distinctly like a failed TV pilot. 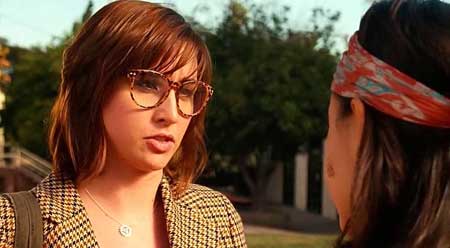 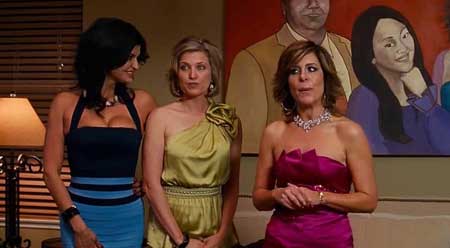 Leah (Alison Scagliotti) is a book smart high school student with a journalistic tenacity that would make Bernstien and Woodward look like pot head slackers. Her friend Katherine (Francis Raisa) is a carefree, sensitive soul, who paints flowers on her face to detract from her acne. They’re like chalk and cheese. But when they get together to solve mysteries, watch out America! We could literally start spit-balling some episodes of their high school based sitcom right now. But let’s talk about the film first. 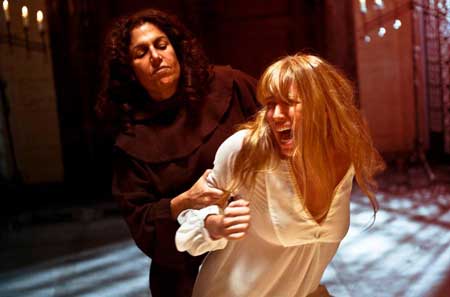 When Katherine becomes involved in their school’s new abstinence group and virginal students begin to drop like flies, Leah’s spidey-senses start tingling and she begins to investigate the group’s leader, Liz Bathos, played with relish by Louise Griffiths. And she’s right to be worried as Ms Bathos is actually Elizabeth Bathery: a 16th century countess who, through bathing in virgin’s blood, has been keeping herself young for hundreds of years. Take that, Maybelline.

As I mentioned previously, Chastity Bites wants to achieve a lot. It mixes giallo sensibilities with bloodletting escapades, as if written by John Hughes. All of which is blanketed in a quilt made of Mean Girls and Daria. Unfortunately, it struggles to hold everything together and by the halfway mark it all starts to feel a bit patchy. A film cannot run on the mashing of genre tropes alone, it needs some weight otherwise it’ll float way with the next strong breeze. In my opinion, That goes doubly for horrors. Look at the great work Astron-6 do with their tributes to cinema of yesteryear for an example of how to do it right. 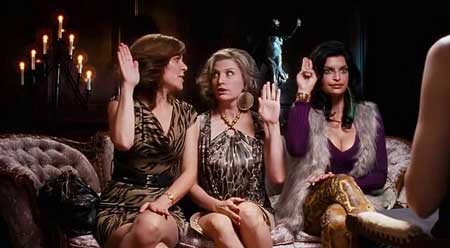 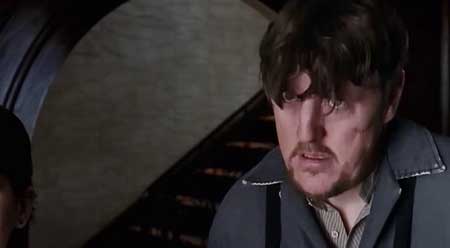 A secondary problem comes in the form of the film’s politics. It is great that we have an openly gay character in the form of Katherine, but I feel that somewhere in the drafting process the writers, John and Lotti Pharriss Knowles, got cold feet about her relationship with Leah, which at the beginning displays all the hallmarks of a loving and nurturing relationship. When a superfluous character/love interest called Paul (Eduardo Rioseco) walks on set, the girls’ relationship becomes derailed in favour of an off the shelf romance between Paul and Leah. Albeit one built around an appreciation of third wave feminism texts. The world isn’t going to implode when two women in a caring relationship are the lead in a slasher film, is it?

Anyway, soapbox politics and stylistic choices aside, it’s hard not to admit that all those on board clearly look like they had a lot of fun making the film, with everyone seemingly in on the joke. But whilst there’s certainly laughs to be had, don’t expect anything too highbrow. Ms Bathos’ abstinence group is called the Virginity Action Group, for example. I’ll just let that acronym settle with you. Those looking for some scares with their chuckles are better off looking elsewhere. Despite all the blood being spilt everywhere, there’s nothing here to really make your skin crawl, which is a sensation we should at least expect in a film about slitting throats and bathing in blood. 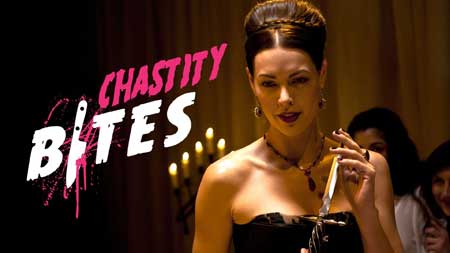 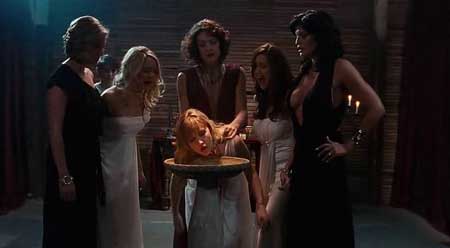 Whether Chastity Bites works for you will be totally dependent on the group of friends your with and the level alcohol imbued. For me, Chastity Bites is only fun when you’re in the moment and, after that, despite its best intentions, it’s not a film I’ll be returning to any time soon. As much as I love a bit of high school hijinks with my horror, I’ll be looking to Buffy the Vampire Slayer to scratch that itch. 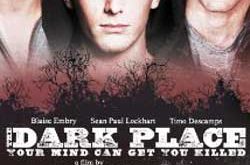