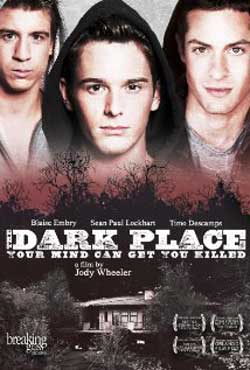 Keegan returns to California’s wine valley to make peace with his estranged family, and finds a mystery that endangers the lives of the people he loves.

Written and directed by Jody Wheeler (In the Closet, Judas Kiss) and produced by Blue Seraph Productions (Begging for Shorts, Something Like Summer), The Dark Place is a drama/mystery film targeted at a gay audience. It isn’t a movie that breaks new ground, but then again, it does not even pretend to do so. It’s basically a homosexual man’s Lifetime original movie – a product that is intended to appeal to its target audience and deliver some escapist entertainment.

Plotwise The Dark Place is what one would expect from a made-for-TV mystery movie: Keegan Dark (Blaise Embry), the protagonist, and his boyfriend (Timo Descamps) arrive at the mansion of Keegan’s estranged mother (Shannon Day) where not only is he constantly being haunted by his past, but also discovers a plot that puts his life and lives of his loved ones in danger. Along the way we meet Keegan’s new step-father and step-brother (Andy Copeland and Sean Paul Lockhart) and his ex-boyfriend/Mrs Dark’s lawyer, Ernesto ( Eduardo Rioseco).

What makes The Dark Place a little bit more memorable is the fact that Keegan has a condition called hyperthymesia. It’s a real-life condition that makes a person remember almost every single moment of his or her life. The fact that Keegan is hyperthymetic is revealed and explained in the opening sequence, so it is makes a perfect sense to assume that it will be important to the plot, but for most of the time it serves as a way of delivering exposition and could’ve been substituted with a simple flashback. Misused or not, it is still a nice, innovative touch I did not expect and I have to give Jody Wheeler credit for it.

I’ve mentioned in the introduction that gay males are this movie’s target audience, but to assume that sexuality is a topic in this movie would be a huge mistake. It is just a matter of marketing: aside from Shannon Day’s Celeste Dark, every major character in The Dark Place is a good-looking homosexual male and every single one of them has at least one shirtless scene (the record-holder being Sean Paul Lockhart, a former p**n actor). At first I thought it should be considered a flaw – ultimately, it’s just an attention-grabbing eye-candy trick – but then I realized that it’s simply about the context and accepted it as a part of the convention, just like I accept female nudity in slasher flicks or nauseating happy endings in modern rom-coms.

When it comes to production, it is very good in this neat, almost sterile, but not very creative way (just like aforementioned Lifetime originals), although the guys at Blue Seraph Productions are guilty of creating two of the most annoying noises I’ve heard in a very long time (the little “jingle” that announces every Keegan’s memory/flashback and the sound of a stun gun).

The Actors are also surprisingly good in their roles. Especially Shannon Day – she oozes motherly love in this movie and made me smile every time she appeared on screen – and Blaise Embry who is clearly having a great time playing a wise-cracking, yet troubled smartass.

So what’s the verdict?

Well, it’s very hard to talk about The Dark place without taking its niche into consideration. On its own it is not a good film. It’s predictable, full of cliches, the characters often behave in an extremely irrational way and, apart from the hyperthymesia part, there is nothing that makes it stand out.

But it’s impossible to take this movie out of its category and make it exist on its own.

This is a product that’s been created with a certain group of viewers in mind by people who know their niche. They do not want to create a universally acclaimed masterpiece, they don’t want to change the face of the cinema and they certainly don’t care what anybody thinks about their movie besides their target audience.

Maybe it’s just because of my love for old-time detective pulp stories, but I simply can’t blame a product (or its author) for being exactly what the consumers want it to be and giving them what they want and enjoy. The Dark Place may not my cup of tea but I’m pretty certain that, just like Harlequin bodice-rippers or 30’s hardboiled fiction (or, again, Lifetime originals!), it will reach the people who’ll find it more than satisfying.