Thanatomorphose is an hellenic word meaning the visible signs of an organism’s decomposition caused by death. One day, a young and beautiful girl a wakes up and finds her flesh rotting.

I know what you’re thinking? What’s with the funny name and should viewers bother looking it up? The synopsis for the film does  a pretty good job at summarizing its meaning. Beyond that searches for its validity as a true word came up mostly blank. None-the-less the film does a bang up job at emphasizing what this word entails by impacting us in the most visually explosive way using a simple story, an actress with alot of heart (and courage) and a highly highly professional job in extreme FX work.

I’m unable to review this film without a fair share of spoilers. Though despite that, it should not deter you from checking out this film as soon as you can. The movie was a hellava effort and should be rewarded for its merits and achievement. “Thanatomorphose” is by any standards an extreme horror film. Unlike other films of this nature, it does so with compassion for our main character’s rather unique ailment. Actress Kayden Rose is Laura, a young girl who works as a nurse for a local hospital. The details of her life is downplayed in a simple way that presents her as a young girl highly sexually active. The film begins with some art house editing work that depicts Laura during intercourse. This evolves into her rather worthless relationship with Antoine, an abusive friend who shows up pretty often to get laid and move on.

Her circle of friends is small but close depicting what I interpreted as the typical college student existence (I made this connection with her failing attempts at sculpting work which is mostly likely academic.. Laura is seen thru most the movie naked with full frontals as  she meanders within her apartment and occasionally takes time to indulge in some sculptural interest. All of it is designed to give our character a rather bleak existence that is about to get much much worse.

Laura develops an ailment which is never disclosed as to “what” the reason or source (and also probably intended to be metaphorical).  Laura begins a slow deterioration of her body which I compare to some extreme form of leprosy. Bruises form, skin begins to dirty while small signs of “something being wrong” emerging from her day to day.  The movie is unique in that our character never once desires a solution or medical help preferring to self repair her body with glues, tape, and various medical supplies all the while it continues to fall apart. This idea is unique in that we’ve already made the connection earlier that she works in some sort of medical profession. Laura’s illness becomes worse…much worse, in that it quickly changes from bad to a reason for suspending disbelief in order to see our character melt, piss and rot away. Never really giving into the pain she must be enduring, we sympathize in that she sees herself as a emotionless victim at this point in her life. Her sex life is routine and uneventful far from any signs of romance or commitment. Her emotional state seems droll and numb only sparking “something” in her nightly acts of masturbation. The stained tear in her ceiling is symbolic of the entire film’s premise and her current emotional point in life.

Horror fans will associate influence out of more organic-themed directors who focus on body manipulation and bizarre transformations. Éric Falardeau has created a truly original piece here that I believe will be discussed for years to come. I took the time to read thru some reviews after viewing this film and found that most comments were absent of analogy favoring to discuss only the gross levels of sickness this film brings to screen. While extreme is great classification it is not the sole reason for this product to exist.

Éric Falardeau says something deeper here about human condition and the emotional state that transforms into a flesh circus of horror sticking to the gut of every viewer this film invites. Some reviews point to a sister film “Contracted” (which I’ve yet to see).

Beyond the “repulsing” comments and associations, there is a really thought out effort here that translates itself as it  progresses. By the end of the film, we learn how deep in the rabbit hole she has leaped leaving nothing but the slow hold on the film’s remaining shot.

The film may be too intense for viewers who don’t like to see maggots, blood, piss and body parts falling off, however also keep in mind that its visuals support a form of silent narration. Incredibly smart and intense,  Thanatomorphose is sickening experience and something to behold. 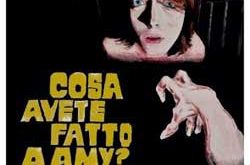