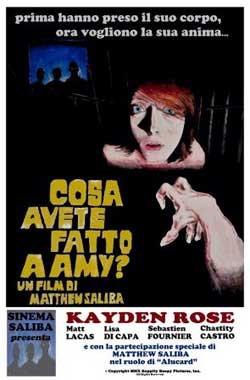 There’s a house party going on in a beautiful old mansion, but the patrons are growing tired of each other, and their escalating boredom of course leads to in-fighting and sarcastic jabs at one another. As they’re about to walk out on the proceedings, leave it to the illustrious host, Alucard, to liven sh*t up just a tad. And liven sh*t up he most certainly does…everyone’s name is thrown into a hat, and the first name drawn out (as there can be only one) becomes everyone else’s slave for the night.

Since the title of this flick isn’t ALUCARD IN THE ATTIC, I think you can already guess by now that it’s the young and beautiful Amy who gets picked out of the hat by the hand of fate. As the night closes in and presses on, grudges and frustrations are taken out as poor Amy is humiliated and beaten down physically, mentally, emotionally, and any other “ally” word you can possibly think of. How does the night end for our heroine? Guess you’ll just have to watch for yourself to find out…

Matthew Saliba, a very talented writer/director/columnist/fetish model from the Great White North (that’s Canada to you and me, Russ) first made his way onto my radar well over a year ago when a mutual friend put us together so I could review his brainchild, FRANKENSTEIN UNLIMITED, a collection of shorts by five different writer/directors (including himself) that spanned all genres and timelines, and all based somehow on Mary Shelley’s original FRANKENSTEIN novel. It was genius in its simplicity, and megamind in its execution. Saliba’s contribution alone, the hauntingly gorgeous DARK LOTUS, a six-minute tale told solely through still photography, not only made me declare him a talent to definitely watch out for in the future, but also cemented me as a lifelong fan of the man’s work.

So many times in independent movies with low budgets, especially shorts like this one and even with solid, well-written storylines like this one, the acting can oftentimes take you out of the story if it gets too cheesy or hammy, or the actors are just plain untalented. But once again, Saliba has surrounded himself with nothing less than a stellar cast. I have no complaints with anyone at all here – from the hilarious Fournier to the gorgeously bitchy Di Capa (keep your eyes open for this little lass as well – she’s going places), the cast is solid from top to bottom.

But then there’s the lovely and talented Kayden Rose – a staple of Saliba’s short films, as well as being the title character Amy here. To say that I am in intense lust with this woman – not only for her beauty, but for her fearless risk-taking talent as well –would be a ginormous understatement.

Saliba has never needed much time to tell his tales, and the way he packs so much emotion, story, and even a little social commentary laced with his own insights into the fragile human psyche, has never ceased to amaze me. And, being a writer myself, it oftentimes has made me even a tad envious as well…but I’ll never admit that in public! Here, it only takes him 23 minutes, and the result is nothing short of genius.

Rumor has it (and don’t correct me if I’m wrong) that this brilliant short is already out of print on its initial DVD run. DO NOT let that stop you from seeking it out and trying to get your hands on a copy of your very own though. Rumor also has it (okay, this came straight from the mouth of Mr. Saliba himself) that due to the overwhelming response to AMY’S IN THE ATTIC, the distributor of this short has commissioned Saliba to write and direct a feature-length version of this short, which he is currently shoulder-deep in the borderline of writing as we speak…and I, for one, cannot f*cking wait for the end result!!

In a conversation with a friend recently, I actually had the testicular fortitude to compare Saliba to one of my all-time favorite writer/directors, Neil Marshall. That may seem extremely pretentious and premature on my part, as Saliba is, of course, not nearly as established in the genre as Marshall. But I can assure you that the comparison is totally out of fanboy love, and actually quite accurate if you think about it. See, just like Marshall, Saliba makes my job as a reviewer incredibly easy by consistently making extremely kickass flicks…and I really cannot give a higher recommendation than that.