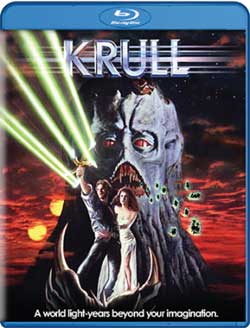 A prince and a fellowship of companions set out to rescue his bride from a fortress of alien invaders who have arrived on their home planet.

In 1983, Ron Silverman produced a British-American directed by Peter Yates called Krull. Their creative ambition, though admirable, failed to successfully embed its memory within the minds of mainstream masses. It lacked a certain charisma inherent in beloved fantasy films made timeless by their delightful storylines. Perhaps its plot holes and moody thematic strain deserve the blame. Also, main protagonists Colwyn and Lyssa want for more depth, character, and personality.

Colwyn does not display any distinguishable traits, while Lyssa, running constantly through a dark palace in flowing robes, does little save for rejecting the “Beast’s” (a super creep) marriage proposals. The juicy characters lay on the outskirts behind the hero and his damsel in distress. Although unsuccessful in impressing, this understated fantasy possesses its merits.

The plot follows the classic motif of the hero on a quest. Innocent, immature, and a tad naive, Colwyn must face ruin and catastrophe before developing into a man and ultimately, a fit ruler of his people. A nefarious people called “Slayers” and ruled by a sinister entity dubiously titled “The Beast” (inciting biblical undertones) pillage and plunder the universe, steadily encroaching on the kingdoms of Lyssa and Colwyn, royalty native to the home planet of “Krull.” As occurs naturally in story arcs of this particular pattern, a prophecy looms above the focused plot. A girl “of ancient name” will choose a king. Together, they will reign over their world, and their son will rule the galaxy. As expected, “The Beast” desires Lyssa (whose ancient name marks her as the girl of the prophecy) to choose him as her king. He kidnaps her mid the wedding ceremony; his army of Slayers massacre nearly all present. By a stroke of fortunate fate, Colwyn survives and meets an old wizard named Ynyr whom nurses him back to health. Thus commences Colwyn’s perilous journey to rescue Lyssa from the “Black Fortress” where the Slayers sail the galaxy.

Along the way, Colwyn retrieves a legendary weapon Excalibur-style called the “Glaive,” which closely resembles a fancy boomerang. The scenes leading up to this moment contain shots of nothing but Colwyn casually walking over mounted rocks that trail up a mountain side (accompanied by epic music, of course), an over-extended scene unnecessarily wasting minutes of film. This scene exemplifies the issues with this movie. Colwyn’s ascent, despite the blaring orchestral score, underwhelms all with his slow stride and the task’s sheer absence of difficulty—an essential element in the hero’s tale.
After completing his exceedingly easy task, Colwyn and Ynyr pick up strays to add to their meager arsenal of rescuers. Here, viewers encounter the characters with real substance. We meet “Ergo the Magnificent” (a grand title he constantly likes to introduce himself as), a bumbling magician whose sole talent resides in transforming himself into a myriad of different animals, intentionally and accidentally. He talks with a thick British accent and has a serious penchant for sweets, as well as a fondness for Cyclops and orphan children. A band of thieves and bandits also join the motley crew, a gang initially intent on robbing and killing Colwyn and Ynyr, but easily swayed by Colwyn’s promise of freedom —a stretch for those suspending their willing disbelief. Liam Neeson makes a guest appearance amongst this rowdy group, as Kegan, an ax-handling polygamist with a wife in every town. The troupe continues to augment with the addition of another wizard, the blind “Emerald Seer” and his boy apprentice, Titch, whom wishes for nothing but the affection of a puppy (which the magnificent Ergo happily obliges to fulfill in an endearing moment). 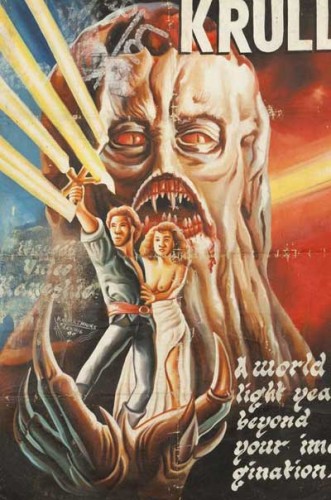 These characters make the film. Unfortunately though, the Emerald Seer meets his end too quickly. In lieu of the tragedy, Ynyr suggests visiting the “Widow of the Web,” whose visits none survive. When Ynyr speaks of her, one can immediately tell a romantic past once intertwined the two. This concept of a wizard and a powerful witch engaging in a passionate affair gone awry speaks volumes creatively, a fresh approach broached by few in fantasy. The visual of her crystal web and iconic personage wrapped in black and resonant of images of Euripides’ Medea leaves a memorable impression. Her presence, too brief, fills the movie with a dark and powerful energy. 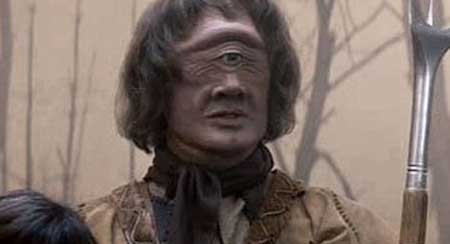 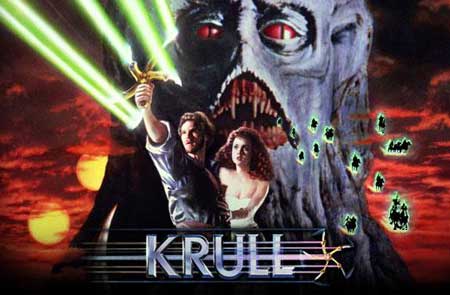 In the end, Colwyn, Lyssa, and their small army somehow triumph against all odds and against a ginormous and deformed alienoid representative of the Beast. How they manage to shirk countless troops of Slayers and the eyes of the omnipotent Beast shall remain a perplexity (amongst other discontinuities.) However, as aforementioned, the movie did possess its merits, such as in its novel characters. This does not compensate for its lack of engaging amusement or the epic quality needed to make a medium of the fantasy genre successful. If you enjoy fantasy, Krull may merit a gander, but do not expect it to impress.

Pick up Krull now on bluray per Mill Creek Entertainment 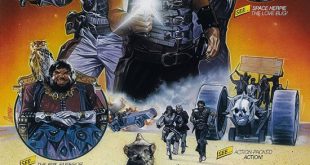