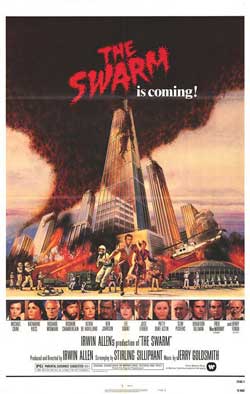 Throughout the 1970s, disaster movies were all the rage. The increase in popularity was thanks in large part to Irwin Allen, the man behind movies such as The Towering Inferno and The Poseidon Adventure. He would hire a multitude of established personalities and place them into situations leading to the screen deaths of many of their characters. The situation could range from the fire of The Towering Inferno to the television movie Flood!’s titular flood. In 1978, Irwin Allen released a disaster movie called The Swarm which was centered about an American invasion by African Killer Bees. 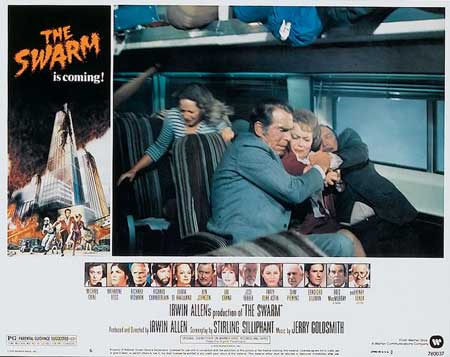 There is an argument in The Swarm about what name to use for the bees. The common term is African Killer Bees. Most of the characters end up simply calling the bees Africans, which sounds extremely racist as they should things such as “The Africans are attacking Maryville!” One character says that the bees should really be called Brazilian Killer Bees because the specific swarm that they are fighting originated in South America. I will simply call them Killer Bees because as far as I know, bees don’t have allegiance to any nation or nationality. They are bees. 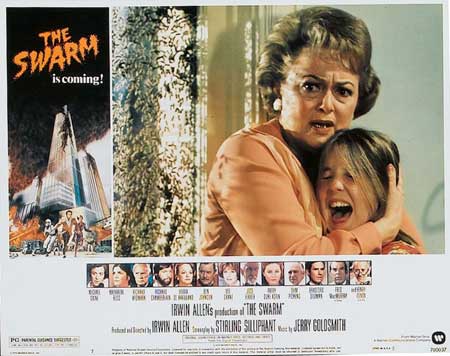 Michael Caine starred in The Swarm as Dr. Brad Crane, a scientist tasked with helping the government and General Slater (Richard Widmark) stop a giant swarm of Killer Bees from killing more people than they already have as the movie begins. Crane, in turn, brings in some scientists such as Dr. Krim (Henry Fonda) and Dr. Hubbard (Richard Chamberlain) to aid him in his task. The first place that the bees are headed is Maryville, a Mayberry-like town populated with characters portrayed by actors such as Olivia de Havilland, Fred MacMurray, Ben Johnson, and Katharine Ross. Also stopping in for a small appearance is Slim Pickens. 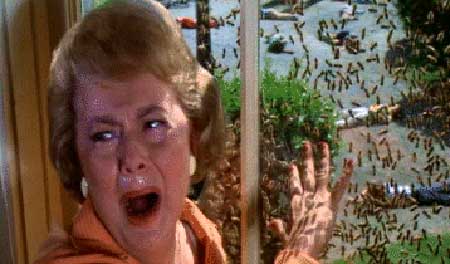 There were a few things that held The Swarm back from being another great addition in the 1970s disaster movie collection. The most notable setback was the length of the movie. The Swarm was two and a half hours long and felt longer. Much of the time was spent watching characters witness destruction or argue with one another. There was also a romantic subplot involving some of the Maryville characters that added absolutely nothing to the overall story. My suspicion is that the romantic subplot was included solely to attain more established actors whose characters would be killed later on in the film. Other time extensions in the movie involved repeated arguing between the doctors and the government, and death scenes that were lengthened past the point of effectiveness and into ludicrously overwrought demises.

Then there was the disaster portion of The Swarm. A large group of bees that can kill people with only a few stings is a threatening proposition. It could easily lead to the downfall of some major metropolitan areas and the deaths of thousands upon thousands of people. However, some of the things that the bees were capable of doing in this movie were unrealistic, even in the context of The Swarm. It felt as though Irwin Allen had some unused ideas from other movies that he wanted to capitalize upon and tossed them into this one, hoping for the best results. The bees managed to cause military helicopters to crash, they derailed a train, and they initiated the explosion of a nuclear power facility. These bees caused much more destruction through these events than they ever did by attacking people throughout the rest of the movie. 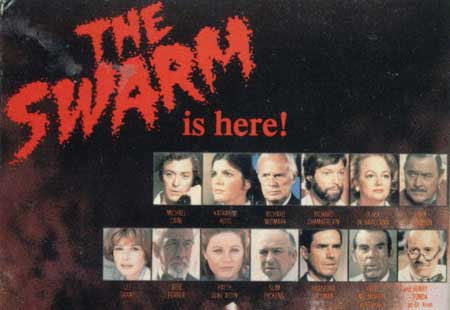 None of this is to say that The Swarm is an outright bad movie. There were a lot of good details in the movie that come along with the bad qualities. The acting was a definite upside. With actors as esteemed and experienced as the ones in The Swarm, there are going to be good performances all around. Even with the lackluster script that included a lot of exposition about what had happened, was happening, or would happen, the actors managed to make it watchable. Slim Pickens’s short appearance as a distraught father coping with the death of his son was an emotional moment that broke up the yell-acting that comprised the majority of the movie. Not that the yell acting was bad. Michael Caine and Richard Widmark brought enough gravitas to their performances that the monotonous yell-acting was entertaining to sit through.

In the end, the good and bad of The Swarm battle it out to produce a film that ends up sitting almost right in the middle of the scale. With some suspension of disbelief and patience for the runtime, it can be quite the fun film to watch. The acting and much of the action sequences are well done but the length of the movie can be a deal breaker for many viewers. It seemed like a daunting length when I turned the movie on. Two and a half hours is a large chunk out of anyone’s day. It is worth it though. There is no reason to not watch The Swarm. If the sound of Michael Caine and Henry Fonda dealing with Killer Bees sounds even remotely interesting, this is a must watch.