You a big Steven Spielberg fan? I sure the hell am so you can imagine my interest in this new Blu-ray collection heading our way.

It’s the ‘Steven Spielberg Director’s Collection and it certainly goes on the “must own” list. 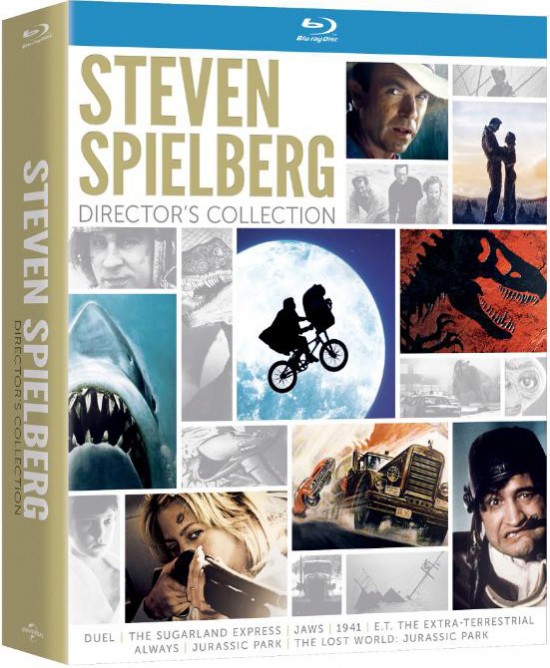 Eight memorable films from one of the most acclaimed directors in motion-picture history come together for the first time ever in the “Steven Spielberg Director’s Collection,” available on Blu-ray and DVD on October 14, 2014, from Universal Studios Home Entertainment. Since beginning his long and distinguished career on the Universal backlot more than 40 years ago, Spielberg has gone on to direct an unprecedented number of some of the biggest box office hits and critically-acclaimed films in cinematic history. The “Steven Spielberg Director’s Collection” showcases some of the most unforgettable movies the three-time Academy Award winner made for Universal, including his debut film Duel, which has been digitally remastered and restored and will be presented in widescreen for the very first time in the U.S. and Canada.

The “Steven Spielberg Director’s Collection” includes four movies never before released on Blu-ray, including Duel and The Sugarland Express that have been digitally remastered from their original film elements. Hours of bonus features include Making-of Documentaries, Interviews with Steven Spielberg, Behind-the-Scenes Featurettes, Rare Archival Footage, Deleted Scenes and much more.

The eight films featured include (*Denotes First Time on Blu-ray™):

Duel* (1971)
A traveling salesman (Dennis Weaver) is terrorized by an unseen trucker on a remote desert highway.

The Sugarland Express* (1974)
A mother (Goldie Hawn) desperately attempts to reunite her family by helping her husband escape prison and kidnapping their son.

Jaws (1975)
When a seaside community is under attack by a great white shark, the chief of police (Roy Scheider), a marine biologist (Richard Dreyfuss) and a shark hunter (Robert Shaw) embark on a quest to destroy the beast.

E.T. The Extra-Terrestrial (1982)
A lost alien from space befriends a 10-year-old boy (Henry Thomas) who helps him find a way home.

Always* (1989)
After sacrificing himself to save a friend (John Goodman), a daredevil firefighting pilot (Richard Dreyfuss) returns to earth to help his surviving girlfriend (Holly Hunter) move on with the help of an angel (Audrey Hepburn).

The Lost World: Jurassic Park (1997)
Four years since the disaster at Jurassic Park, two groups are in a race against time that will determine the fate of the remote island’s prehistoric inhabitants. Starring Jeff Goldblum, Julianne Moore, and Vince Vaughn.

The set hits in October.