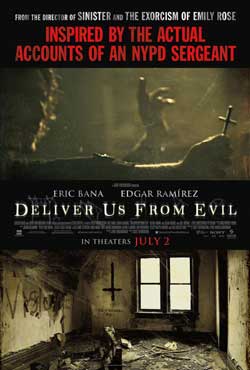 NY police officer Ralph Sarchie investigates a series of crimes. He joins forces with an unconventional priest, schooled in the rituals of exorcism, to combat the possessions that are terrorizing their city.

It’s funny how the powers that be in Hollywood keep foisting “Based on a TRUE story” in front of a lot of the horror films they release, as if that’s gonna make audiences flock to see them. I cling tight to the tenet saying if I wasn’t there to see whatever the supposed “Truth” that the film is based on in person, then it just didn’t happen. Yeeah, yeeah…I know what you’re all saying, but that’s just the way I roll. You’re gonna sit there and tell me that Hollywood is a bastion of truth & honesty all of a sudden?

Deliver Us From Evil, the new film from director Scott Derrickson, is the latest of Hollywood’s attempts to convince an unsuspecting populace that stuff like this really happened. What made this story particularly interesting for me is that it takes place in the South Bronx, my hometown. Now mind you, I was quite alive & relatively well when these events supposedly took place but I’ve never heard a single word about them before seeing this film. Call me doubtful, but stories like this one – that take place in the South Bronx (where I’ve lived my entire life), are stories that I’m pretty sure that I would know about.

But still I digress…

Detective Ralph Sarchie (Eric Bana) works the mean streets of the South Bronx with his partner, Butler (Joel McHale). Sarchie has a special knack of knowing which radio calls he gets are going to be run of the mill and which will provide him with a rush of adrenaline. And after taking a domestic violence call, our duo find themselves smack dab in the middle of some type of supernatural hubbub that involves a group of soldiers who served together in the gulf war and their families. The film begins as a sort of straight up police procedural before going through a few different cinematic permutations, eventually settling on the theme of satanic possession. Whether this idea is gonna be successful or not is entirely up to the audience, but all I got out of it is a mildly disconcerting mash-up of Seven (1995) & The Exorcist (1973).

First off, lets talk about the performances. Eric Bana is a fine actor, I enjoyed his stints in films like Troy (2004), Munich (2005), Star Trek (2009) & Hanna (2011). Hell, I even liked his performance in 2003’s Hulk (Which was a lousy movie), but he just doesn’t fit the role of a detective from the Bronx. In an attempt to look/sound gritty, all he does is come off as stiff with a false aura of intensity surrounding him. Add the fact that he occasionally lapses out of his (Servicable) Noo Yawk accent and back into his Aussie accent and you get a performance that isn’t too convincing. The script (By Derrickson & Paul Harris Boardman) makes him a cop who keeps the ugliness of his job inside to protect his family but that’s a trope that we’ve seen time & time again in cop films and this particular script does nothing new with it. McHale isn’t the first actor I would’ve thought of to essay the role of a tough cop in the Bronx but I must admit that he surprised me although the script has him do some pretty stupid things (Like pull out a knife to fight all tough guy commando style when he has a perfectly good gun on his person. But the two of them do have a fairly convincing relationship regardless of the silly situations the script puts them in. 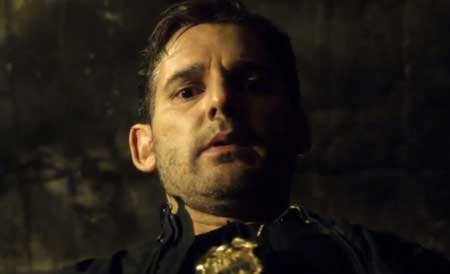 Olivia Munn plays Sarchie’s wife, Jen, but it’s a thankless role with very little for her to do but look concerned every once in a while. She’s great to look at and has proven herself to be a pretty nifty actress as well (Watch her on HBO’s The Newsroom if you doubt me) and I wish that the script had a bit more meat on its bones for her to chew on. As much as the film centers on Bana and his performance, the film is pretty much swiped out from under his feet by Edgar Ramirez as Mendoza, a priest who has fought off the demon of alcohol addiction before he learned to fight off the satanic ones that are featured here. He gives a very subtle, world weary performance that highlights the idea of someone who has tasted the very bottom of the barrel and found a sort of redemption through Jesus Christ. The only hiccup is his very strong accent, which makes more than a few of his line readings hard to decipher. Not a deal breaker, but it is noticeable. 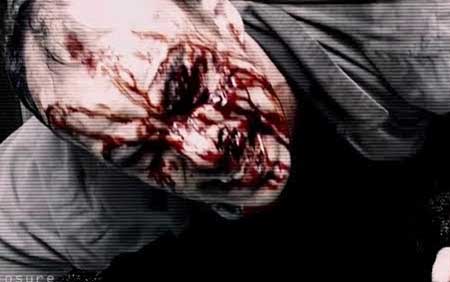 The other standout performances come from Olivia Horton as Jane, a mother who tosses her child into the lion’s cage at the Bronx Zoo & Sean Harris as Santino, who is the main focus of the final third of the film. Horton has a funny way of contorting her face & bugging out her eyes to where her image is quite disconcerting, in other words – she can look really scary. She twitches, jerks & mumbles herself into a frothy fervor that’s creepy & effective. Harris has the “Linda Blair” role here and while it eventually all became a bit on the hysterical, overwrought side, it’s still mighty frightening to witness.

The film succeeds on a theological level, but it tries so hard to slam us over our heads with jump scares and loud music (Kudos for weaving in the music of The Doors into the plot though), that it ends up just being a loud bore for the most part. It’s most effective scare is its simplest one – a stuffed owl that gives Sarchie’s daughter a pretty good fright, and that’s featured in the trailer so you’ve seen it already. Deliver Us From Evil also suffers thanks to its excessive running time. It’s one of those films that gives you ending after ending after ending, never knowing when to call it quits. Cutting 15-20 minutes off of its running time would’ve really helped tighten it up some and as I saw it at a screening about a month ago, I thought that the producers had time to indeed, edit it just a bit. But apparently they haven’t. 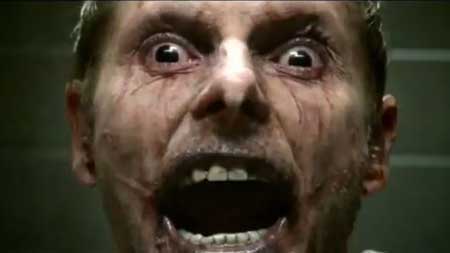 Deliver Us From Evil is hardly the worst horror film I’ve seen this year, I just wanted something with a little more substance to it. It fares well in all technical aspects and is directed with some panache, but a wayward script, haphazard editing & ridiculously long running time really cut into its effectiveness. If you’re into this sort of subject matter, then by all means have at it. Personally, I would recommend it with a heap of reservations because it sets itself up to be a lot scarier than it actually is & that’s a near fatal flaw. The fact that it mildly succeeds in spite of itself is commendable.