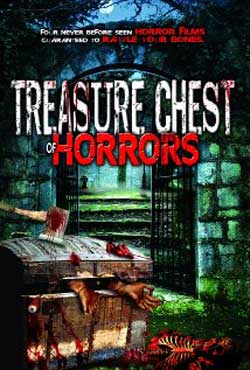 Percival Pirate goes on a journey to discover his Grandpappy’s hidden treasure chest. What he believes is treasure turns out to be four never before seen horror films.

TREASURE CHEST OF HORRORS: it’s like an unofficial sequel to VHS. It’s an anthology flick . . . and each story is understood to unfold from an old VCR. There are no sleazoids finding scary tapes in the act of burglary, though. Instead, a pirate named Percival has, at last, cracked open his grandpappy’s buried treasure, which consists in a bunch of video tapes, each one containing a different seeming made-up-on-the-spot inside joke–I mean–horror tale.
Roll over, Long John Silver.

It all starts with ROTTEN CLASSMATES. “Never trust those people in the back of the library, because they’re usually sociopathic lunatics.” Well, the one in this segment is. With a little bit of provocation, he dons a prison-style jumpsuit and a gas mask. An homage to MY BLOODY VALENTINE? And, oh yeah, he starts offing his classmates. Death by pencil, iPod, mop bucket, and rake all ensue. Oh no.

Then comes VAMPIRE’S LUST. It’s about a twenty-eight-year-old dude who lives with his parents and works on films with his buddy. If you’ve ever seen the YouTube “Around the Town” series, it’s those two guys: M. Kelley and Shawn C. Philips. While running an errand to go get milk for his mom, M. Kelley gets bit by a bat . . . and turns, slowly, into a vampire. A nice reference to WOODCHIPPER MASSACRE gets made along the way.

That’s followed by RESIDENT EMO. Get it? Oddly enough, this segment features the one and only Lloyd Kaufman taking a dump. Nice sound effects, by the way. Let’s see. This one is about an “emo kid” who accidentally turns himself into a zombie after wrist-cutting with a cursed saw blade. Guess what. He goes on a feeding frenzy.

The final story is MAMA IT’S A MANNEQUIN, which is something like Tennessee Williams meets . . . I don’t know, something about an inanimate statue coming to life and offing people . . . maybe the Old Chief Wooden Head story from CREEPSHOW 2. Sure. Why not? In any case, a mannequin comes to life and crashes a girl’s birthday party. Big time.
I guess all obvious criticism of this movie amounts to the same thing as praising its utter juvenile nonchalance. Its charms and inadequacies are more-or-less one and the same.

To hell with good props, a tight script, non-clumsy camerawork, un-corny jokes, convincing make up effects, believable characters, a soundtrack that doesn’t sound like Casio pre-settings, etc. etc. It’s all a joke . . . based mostly off of having no production value whatsoever. TREASURE CHEST OF HORRORS is a treatise–a manifesto–in not giving a crap. I can respect that.

But it’s all so amateurish that, at times, it feels headache-inducing. The acting is as you’d expect: people yelling at each other unconvincingly, often with dialogue made up on the spot–I think. And Percival the Pirate’s breaks between segments are so corny. Really bad jokes. But I guess if that’s what you’re after then you’d enjoy his intermediary commentary.

The gags could be better developed as could, well, just about everything in TREASURE CHEST OF HORRORS. It often lacks a sense of comedic timing, and could use more visual humor bits. Although the mannequin scenes in MAMA IT’S A MANNEQUIN are clumsily hilarious, as is the vampire bat in VAMPIRE’S LUST.

The stories are uneven, as well: they don’t fit together or seem unified as one. Each one seems out of place, and it all comes across as a jumble.

Still, it has the charm of feeling like something your demented friends made because they were bored one weekend. And it doesn’t drag. The stories get told nice and quick, descending into amateurish mayhem, moving right along to the next one. Thank God.

All in all, If you like the locally made movies you see at three in the morning on community access television, then you’ll love TREASURE CHEST OF HORRORS.