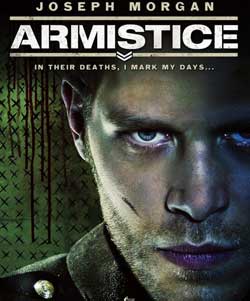 A Royal Marine awakens to find himself imprisoned and forced to fight to the death against inhuman opponents again and again.

War is Hell.  For yours truly, being fortunate enough to never have encountered firsthand what the term “war” encompasses, it took merely my 8th grade English required reading list to bring to light that it isn’t all justified murder and a hero’s welcome home.  The book was Dalton Trumbo’s Johnny Got His Gun, published in 1939.  For those unfamiliar, jump over to YouTube and watch the Metallica “One” video for the Cliff’s Notes version and save me the trouble of explaining it.

Taking a direct cue not from plot but from the unsettling aesthetic of confused desperation that makes the novel so remarkable is freshman writer/director Luke Massey’s “Armistice.”  Though by definition an “armistice” represents a cease-fire, the title does little more than confuse this already murky, fascinating slow burner.  The original and equally generic moniker “Warhouse” was probably more befitting.  Unless, of course, I missed something.  There are so many subtle levels touched upon in the script by Massey and Benjamin Read, it’s entirely possible one or two slipped by me in viewing.

A simple mystery that calls to mind classic “Outer Limits” episodes finds Royal Marine A.J. Budd (Joseph Morgan) awaking in a seemingly rural home that is foreign to him.  Face down atop the covers in an upper bedroom, he spies his dress uniform neatly folded next to him, as well as a knife.  Only blinding light can be seen through the windows, and the cozy kitchen downstairs has a sandwich and hot drink prepared.  As the clock chimes the nine o’clock hour, Budd hears movement through the house.  Before he can say “OMG, WTF?” a demon/mutant/zombie (“The Fallen” in the credits, and portrayed by William Troughton) sprints in and immediately attacks him.  To protect himself, he is forced to kill it in self-defense.  Once over the shock of the confrontation, he finds that he cannot leave, every possible exit locked and completely impenetrable.

So it goes, on and on in an indefinite daily cycle.  Every morning the Fallen arrives to fight to the death, and by the next day the body has vanished until its reappearance at the exact same time.  Food and beverages are present at regular intervals, presumably out of thin air. This is a brilliantly conceived scenario, but is it enough to hang a feature length (albeit brief at 80 minutes) film upon?

For the most part, “Armistice” succeeds by constantly peeling away layers from the central storyline, dragging only when it attempts humor (not a strong suit) in its depiction of Budd’s descent into madness as the hopelessness of the situation begins to dawn on him.  His discoveries are reached via journals found in the basement written by Edward Sterling (Matt Ryan), another soldier who was also imprisoned there.  Through flashbacks and his entries, it’s made abundantly clear that Sterling wasn’t a recent former occupant.

Sterling’s prose leads to many revelations, most of which I cannot in good faith divulge.  They do clue Budd in to a possible means of escape, but it could lead to a fate worse than eternity trapped within the walls of the home.  It’s also stated that death is not an option, as Sterling confesses to attempting the “coward’s way out” several times, only to rise again the next morning.  This concept did elicit an unintended chuckle, as it recalled memories of Bill Murray’s suicide montage in “Groundhog Day.” 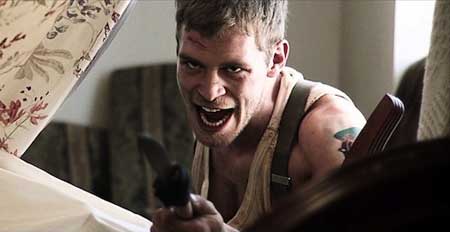 Ryan (“Criminal Minds: Suspect Behavior) is afforded little to do outside of quick cuts and an impassioned voiceover as Sterling, leaving the entirety of “Armistice” on Budd’s shoulders.  Known (and lusted after by both male and female friends) for his work as Klaus Mikaelson on “The Vampire Diaries” and “The Originals,” Morgan is more than up to the challenging lead role.  He brings doomed melancholy to an empty canvas, not an easy feat considering we (and possibly Budd himself) know absolutely nothing about him beforehand.  A few fleeting dreams reveal only the fact that he was engaged in combat at some point in the past.

Writing anything regarding “Armistice” without addressing the notion of the house as an allegory for international conflict is an impossibility, given that it permeates nearly every facet of the film.  Hell, you probably picked up on that in the synopsis alone, friends.  The elements for a heavy anti-war message are definitely present and accounted for, the obvious example being Budd’s frustrated ignorance over who and why he’s killing in the first place.  Massey deftly handles this broader spectrum with a craftsman’s grace, making his feelings known without preaching.

As artful as his approach to the material may be, Massey’s meticulous presentation tends to drop the ball on a few prime possibilities for welcome punches of intensity.  He opts for a jump scare and quick resolution to what could have been a nail-biting highlight, when Budd awakens in the basement well past the nine a.m. creature call. Though the Fallen’s ghoulish makeup effects are well rendered, the humanoid never poses much in the way of a threat, serving solely as a metaphorical moral crisis.  In these respects, “Armistice” is a slight failure in the horror department.

That being said, there is still much to admire from this audacious debut, including an ending as wide-open to interpretation as all that occurs prior.  “Armistice” won’t leave you clinging to the person at your side, but damned if it won’t have you thinking once the closing credits roll.  Sometimes, that isn’t such a bad thing at all.