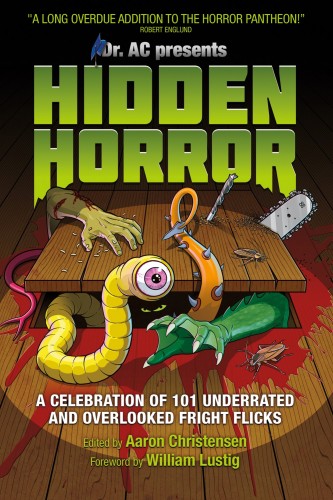 Movie reference books are a horror fan’s gold. Most every horror fan fills their book shelves with tome after tome of gems about Hammer Films, Universal Monsters, Vampire Films, Zombie Movies. There are books on every topic, sub-genre and fan favorite out there. HIDDEN HORROR edited by author Dr. AC is an excellent, entertaining, intimate addition to the monster movie lover’s coffee table book collection. The book dives into 101 often overlooked and ignored classics from a variety of decades of horror featuring films like The Changeling (1980), The Old Dark House (1932) and Mantango (1963). For even the most seasoned fan there is likely a film or two that will surprise and titillate. HIDDEN HORROR is a must have, as the cover suggests, a celebration.

Gathering 101 authors, professionals and bloggers across the internet, Dr. AC (Aaron Christensen) weaves together a delightful mix of personal and informative recollections of 101 horror films that meet the moniker on the book’s cover: “A Celebration of 101 Underrated and Overlooked Fright Flicks.” Each author brings their own insight into the film often sharing their first experience with the film or that extra special something that makes it stick out in their minds. This provides the book with a unique window into not only the films themselves but the make-up of the horror fan as well. It also allows the global topic, hidden gems in horror cinema, to have a variety of points of view and personal influences. It is a welcomed fascinating approach perfect for horror fans making the material that much more relatable.

For many readers there are films included that may cause an eyebrow to rise or an audible gruff. Are these films really hidden horrors? Frankenstein meets the Wolf Man. The Hills Have Eyes. Curse of the Werewolf. But in the perspective of a world comprised of a variety of horror fans, separated by geography, age and taste, every entry makes sense in the end. Each one has its place. Each film is potentially new, forgotten or overlooked for some reader. The joy of HIDDEN HORROR is discovering the unknown classic however. The more unearthed along the way, the bigger the smile that will be had. Brimstone & Treacle. Venus in Furs. The Reflecting Skin. Each new film is another delicious plate waiting to be consumed, devoured and digested with its author carefully skinning, seasoning and grilling it to perfection. With Dr. AC’s careful eye, not a single author drops the ball no matter how diverse their talent, skill or approach. The book is in perfect sync.

A mishandled mix of 101 diverse authors about an equally diverse mix of films could have been a disaster, a painful assault to the eyes. But that is not the case with HIDDEN HORROR. Dr. AC brings it all together with a single goal giving each chapter a shared overall voice and a common thread. With each film, the text is geared to introduce the reader to a new film, to share the author’s opinion and affection for the material, and to give some background to the film itself. The book rises above its competition most often when the authors invite the reader into their personal views and experiences with the film: when they first saw the film; when they share their love for a particular film maker or genre; or, when they sincerely want the reader to reach out beyond their comfort zones to witness a mixture of cinematic madness and genius. The books draws the reader into these films in a fresh manner worth exploring.

HIDDEN HORROR’s biggest achievement is the feeling it stirs within the reader as they finish each of the 101 entries. For many of the films, the reader is immediately tempted to run out and discover these forgotten gems. For many it will be the first time experiencing these films. And for those that are familiar, the result is similar often guiding the reader to fondly recall the film from years prior. Sometimes it may even invite the reader to revisit and reevaluate a film. Even when the author’s opinions sharply disagree with the reader’s thought of the film or the film maker behind the entry, the skill behind the entry invite discussion and thought. The book nurtures the essence of the horror fan, the curiosity for the undiscovered, the excitement of sharing the films cherished from childhood and the camaraderie of the horror fan community.

HIDDEN HORROR is a terrific entry into the often crowded horror reference book library, one that comes highly recommended and appreciated. It truly does what it sets out to accomplish, celebrate 101 underrated and overlooked horror films. It also does so with a big heart, an intimate look into the films, the film makers and the reason behind the adoration for these films. Not only does it celebrate the films, it also celebrates the horror fan as well with Dr. AC’s decision to bring in 101 diverse authors with their own unique opinions, views and passions. The book is a triumphant look at horror and the horror fan. Get it!

Check out the Facebook page for further information on locating and purchases Hidden Horror. 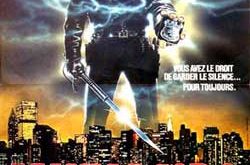 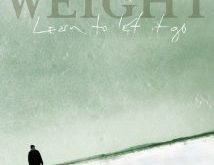 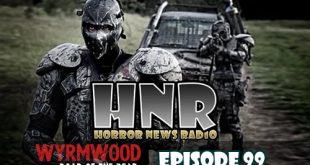