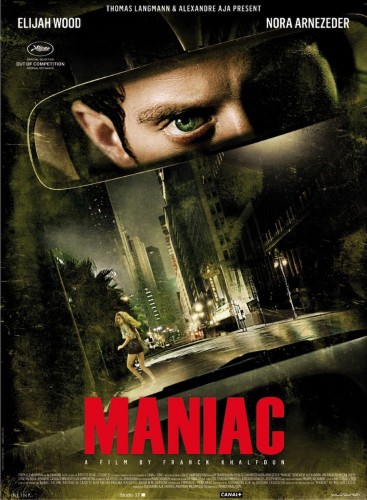 Fixing mannequins by day and killing women by night, Frank Zito fights his insanity and urge to kill when he meets a young, attractive photographer (Anne) who hires him to provide faceless mannequins for her next exhibit. The closer they become the further into madness Frank slips as he must decide between falling in love with Anne or giving in to his homicidal tendencies.

In the Alexandre (High Tension, Piranha) Aja and Gregory (The Hills Have Eyes, Mirrors) Levasseur written Maniac remake, director Franck (P2) Khalfoun does a tremendous job in recapturing the sleazy and profane elements that litter the 1980 original. Every frames oozes the same filth, depravity and danger that permeats William Lustig’s Maniac. This film has an odd nondescript time blend between 1980 and the present giving the film an odd eternal quality blending modern and retro. Elijah Wood is eerie and appropriately repugnant yet oddly charismatic as Frank. Mostly hidden behind the camera wearing a special device, Elijah appears mostly in reflections and on rarely from someone else’s point of view. He is menacing and sick leaving a lasting impression to conflict with even the worst Frodo Baggins memory. The violence is intense and visceral with the graphics being bloody and gruesome living up to the expectations from the original. Make no mistake, Maniac is far from a feel-good film, it is a disturbing look into a sick mind. 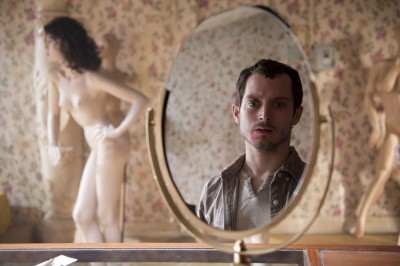 Elijah Wood is quite impressive as Frank Zito. Casting his renown character Frodo Baggins far aside, his performance as Zito is more like his role as Kevin in Sin City (2005). He is stoic, still and intense. His voice is reflective of each emotion he encounters (granted, most all variations are on the fiendish side of humanity) from insecurity to affection (for Anne) to rage to complete balls-out insanity. The first shot of his eyes in the reflection of the car’s rear view mirror is shocking and intense yet simple. Shots of him rubbing his hands fiendishly with steel wool are terribly difficult to watch due to Wood’s anguishing screams over the equally graphic visuals. For much of the film, Wood is off camera with only vocals to back his acting; however, between the few full shots of his character, Wood’s face continues to appear in mirrors and reflections. It’s remarkable how much of a presence the actor retains in the film when his face is rarely visible. Wood embodies the character and the film throughout with a fragile and unstable but violently explosive performance.

The original Maniac (1980) from William Lustig is cherished among slasher fans for its visual effects (from Tom Savini) and its grimy performance from its lead actor, Joe Spinell. Franck Khalfoun’s remake is very much cut from the same cloth. The story is cruel and gruesome, featuring a mentally insane lead, Frank Zito, who is driven to mutilate his victims placing their bloody scalps on the mannequins found in his repair shop. But a chance encounter with an beautiful young photographer, Anne, who subjects just happen to be mannequins provides Frank with an emotional conflict between his past (with his mother), his urge to kill and his new found emotions for Anne. His motivations and actions are disturbing and repugnant but fleshed out. Frank simply cannot adjust and cast aside his impulses. As soon as anyone crosses his path, insulting him, intimidating him or confronting him, he reverts to murder-mode unable to stop his own actions all detailed with a unique visual first-person perspective. The results are frequently hard to watch and equally difficult to ignore. This is not a pleasant film in any respect.

If nothing else, Maniac is appropriately gruesome with respect to its source material and modern cinema and special effects. Gore and blood splatter across the screen with glee and dark frivolity. It is revolting and stomach turning in just the right ways meeting most all expectations. Frank knifes, scalps and eviscerates his victims with precision and first-person perversion. This film is not for the faint at heart and proudly stands up to the original. The camera work accentuates the violence, the graphic gore and the mental state of Frank Zito. From the opening knife to the jaw to the final fate or Frank, the effects deliver in a way rarely seen since the slasher heyday in the 80’s. Even as explicit and appalling the effects are, they remain remarkable in their horror movie sensibilities. When Frank tears the scalp off one of his later victims in full view of the camera, it is a shocking, horrific and repulsive sight. For those who love their gore, there are very few films that contain what will be found in Maniac. 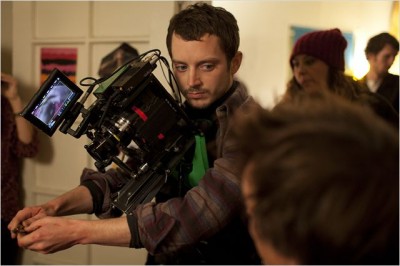 Franck Khalfoun’s direction is curious and entirely successful. For much of the film, the camera is mounted on the chest of its star, Elijah Wood. This gives the film a first-person perspective not yet seen in film. It has an unnerving and disturbing effect on the film. It is riveting and uncomfortable, the perfect combination for this type of film. The director takes great care to focus on mirrors and reflections as needed to reinforce Wood’s participation in the film, and by doing so reinforces the inclusion of the film’s lead. He also gives the film a grimy, greasy feel that is tangible. The film also masks its placement in time by mixing 80’s feels to the scenery and camera work with modern tools, artifacts and techniques. Khalfoun’s direction and film, by result, is unique in its tone, visuals and atmosphere. He is definitely a director to keep an eye on. 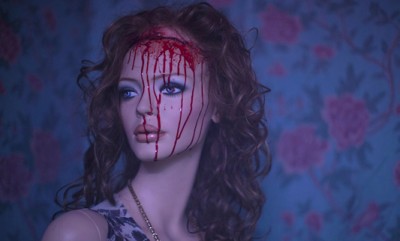 A Maniac remake is an easy film to write off and skip entirely. Be forewarned, any horror fan should not do so. The film succeeds in its attack on the senses and sanity of its audience. Shocking, gory and demented, Maniac is repulsive and gruesome. Elijah Wood is understated and deranged as Frank Zito, full of pathos and anguish. While he isn’t provided enough emotional texture or ample interaction with the other cast to fulfill the entirety of the character, his expressions (or, sometimes, lack thereof) are terrifying in context. The effects are sick, plain and simple. The sites of scalps being ripped from victim’s heads are vomit inducing. The sweat, grime and dirt fall of the screen, disturbingly so. Few films can disgust its audience as effectively as Maniac does. Perhaps an acquired taste, Maniac is a horror film and remake worth noting and comparing to its source material and the time from which the original was derived.