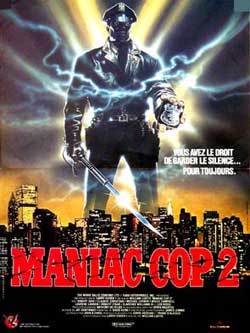 A supernatural, maniac killer cop teams up with a Times Square serial killer.

Sequels should be looked at as movies in their own right – just in case the first was missed and how they function as follow ups to the original. With horror/thrillers there are countless examples of sequels missing the freshness of the first and often it is the case that it would have been better to leave well alone. 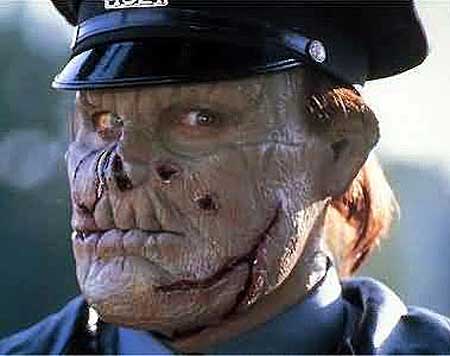 Maniac Cop belongs in the camp of movies made in the 80s with killers that cannot be killed. No reason is given for this – other than the general acceptance that these once flesh and blood entities are now flesh still but with superhuman ectoplasmic range.

This was made two years after the original and by the same director. Strange as may seem, this is a fuller and better film – not least because the two years have served to lose the eighties exploitation feel. This is much more of a modern piece with more serious acting and themes. 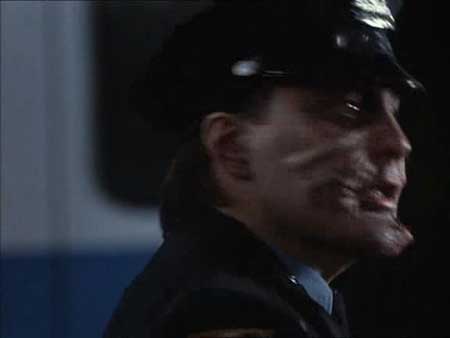 The opener reiterates the last five minutes of MC so as to keep us informed of what has happened. We are first introduced to Matt Cordell – deeper facial scarring more padding in the shoulders as a convenience store is upheld – MC is now firmly on the dark side and is helping villains! Teresa and Jack are trying to convince a new Commissioner that MC is still alive but he’s having none of it and gets them to see the police psychologist. Teresa still has her hooker hair even though she’s off vice – but she’s a good girl so the fashion faux pas is forgivable.

There is a new Detective in charge of proceedings McKinney, who, with the psychologist are fleshier male/female parts than Jack/Teresa. There is a subplot to this film: there is a serial killer on the loose who preys on strippers – and his exploits parallel MC’s for the first third of the film. A visit to the psychologist – Susan Riley, brings no luck for Jack and Teresa in convincing the powers that be that they are not mad – only death does. Jack is dispatched by MC very early in front of a blind news seller (his description of his past life and the feel of frozen death is amazing). 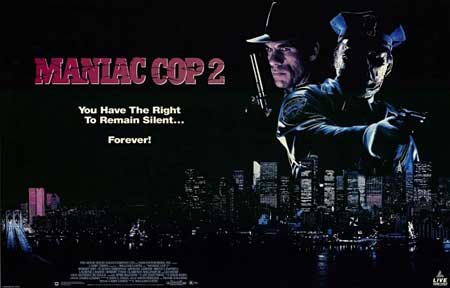 MC now is after Teresa – and in a particularly thrilling sequence handcuffs Susan to the steering wheel of a car they are both in, turns on the handbrake pushes it down a slope whilst he goes after Teresa. We are then treated to Susan negotiating freeway traffic in a driverless car whilst her feet are skidding along the tarmac. Teresa has a chainsaw. This does no good either and MC breaks her neck.

Cue the stripper killer (Turkel) in a titty bar looking for his next victim: he is the hairiest man since ZZ Top. He has found his next victim and clocks her for a killing.

Later he breaks into her room – she had heard him try to get in and call the police – but MC and the regular fuzz all throw each other around. Turkel and MC go out of the window to T’s basement flat – which is far too sophisticated for a serial killer of such sleazy proportions. 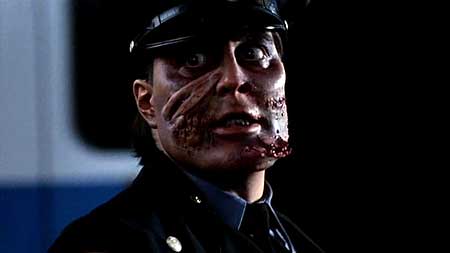 The surviving stripper nails Turkel and he is incarcerated – but MC comes to get him out of prison – killing a ton of regular cops on the way. Turkel and Cordell now head off to Sing Sing where they have a plan to release all of the prisoners and become some sort of bad guy consolidators. The Commissioner pleads with Maniac Cop to stop his actions as he is accepting blame for his incarceration there. Everyone knows Cordell was framed – McKinney pushes the Commissioner to sign a confession to that effect as it is the only chance of the Commissioner remaining alive. There is a resignation among those in charge that MC’s invincibility is due to some sort of rampant injustice.

Cordell finds the three men that cut him years before and kills them. One of them threw a petrol bomb at him – which ensues in MC being in flames for the next few sequences. Turkel cops it – MC envelops him in flames and throws him through a window. There are more window deaths in this film than in any other in movie history. Maniac Cop just loves to throw through glass.

It is unclear how Maniac Cop ‘dies’ – but the next shot is at his funeral in a police designated graveyard with the priest sorrowful for the deception that led to he tragedy that was Mathew Cordell. His coffin is lowered and McKinney throws MC’s ID badge onto the wooden box.

As they walk through the graveyard away from MC’s plot McKinney sums up with wise words:

McKinney ‘It all comes down to Pressure and Justice – there’s only that much difference between a cop and a Maniac Cop.’

Of course this is incomprehensible bunkum but who cares? It sounds right. Kinda.

The inevitable Friday the 13th/Carrie ending has a white gloved hand burst through the wooden box. Sequel No 2 is on its way….