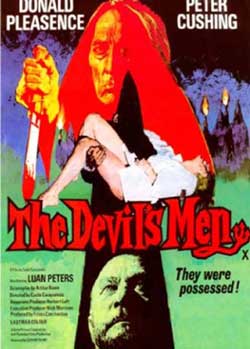 A satanic cult kidnaps 3 young people and Priest Donald Pleasence and Costas Skouras must save them from the hands of this evil!

The Devil’s Men (aka Land of the Minotaur – 1976) is standard 70’s fare. There’s always something nostalgic about 1970’s back lot horror, from the over dramatic acting to the in your face screams for no apparent reasons, there is so much to love and laugh about. The Devil’s Men is not the worst of these movies, after all it even stars two classic horror favorites. Donald Pleasence takes on the role of the priest hero with gusto while Peter Cushing just has to stare into the camera Bela Legosi White Zombie style to make his evil presence known. Actually, comparing The Devil’s Men to the infamous Poverty Row films of the 30’s and 40’s isn’t a great stretch. It was this movement that gave lots of Hollywood fringe films the opportunity to become cult classics. 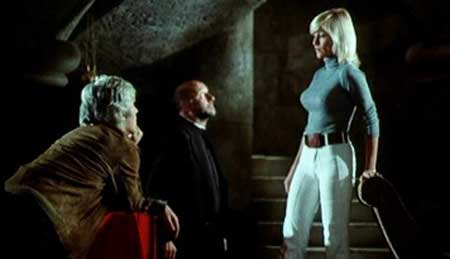 This was especially true in the 1970’s as UK and US low budget productions borrowed actors, locations, and third rate plots from Hollywood masterpieces. In this case we have the ever brilliant Peter Cushing, and soon to be expert on the innate evil in children Donald Pleasence. The story they have to work with is the contrived continuance of an ancient myth, the fact that anything pagan is satanic, and that good (God) will win out in the end. So pretty much everything that every film of the time period covered, unless you take into account aliens. Blockbusters like The Exorcist made these subjects viable and the back lot films cranked out as many of them as possible no matter how ridiculous the premise or outcome. Let’s face it, regardless of how silly it seems, The Devil’s Men is still fun to watch, and here’s why. 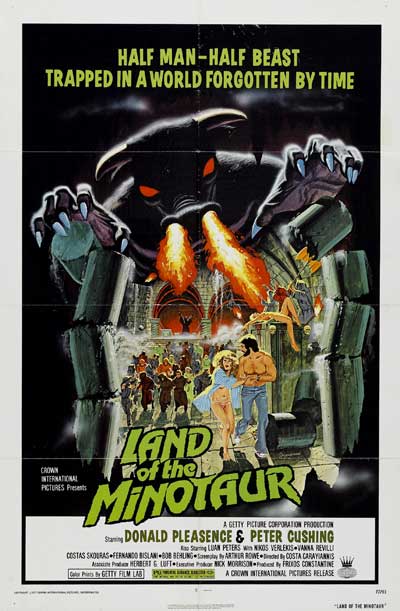 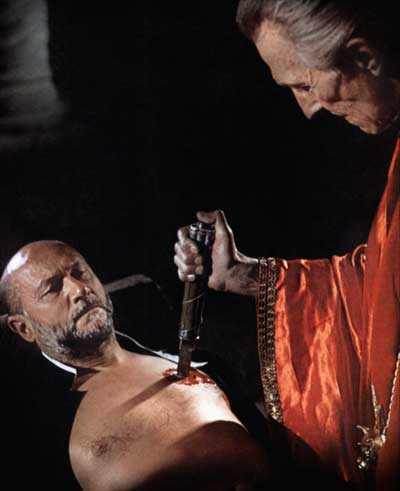 Somewhere in Greece lies a village that still worships the famous minotaur of ancient myth. As if this isn’t enough to get you interested, the leader of the cult is a British Baron, played by Cushing, who leads his Grecian villagers to worship at the alter of a giant stone minotaur statue that spouts flames from its snout and demands sacrifices. Of course these sacrifices can only take place during a specific lunar event, and the village is running out of sacrificial victims. Obviously the best way to solve this latter problem is to capture and offer up the American tourists/college students, that drive a clearly Australian van, that are roaming around studying the ancient ruins. These are only a couple of confusing and fun details. Anyway the missing students’ Irish priest, Pleasence, who repeatedly warned them that what they sought was evil but they went anyway (kids!), makes it his mission to save them from certain damnation and rid the world of the satanic minotaur menace once and for all. With the help of his friend, an American detective, and the girl he just happened to bring along because in the 70’s you didn’t leave your best girl at home, our heroes infiltrate the creepy little village looking for clues as to the students whereabouts. What transpires is nothing less than classic horror gold. 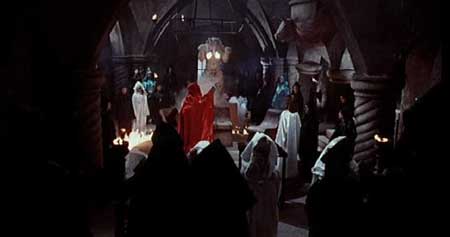 The highlights of any horror film of this generation must contain certain things. Like there must be extreme facial closeups with evil glares and/or inexplicable screaming. The Devil’s Men has this requirement covered with evil glares from Cushing to righteous stares from Pleasence with creepy quiet children, screaming college girls, and confused, startled, or otherwise expressioned characters in between. Next, there must be a battle of wills. That is, the will of good verses that of bad. Neither side can be swayed to stray by the others and in the end there must be a goofy fiery battle with fireballs and explosions. Finally, there must also be a catchy theme song that sums up the entire movie while also relating to the time period in which it represents. This one is a bonus for metal music lovers who always have their devil horns on standby. The Devil’s Men‘s movie titled closing theme music that takes us to black is brilliant 70’s rock that, for a moment, sounds like King Diamond is providing background screams. Talk about the satanic seventies. 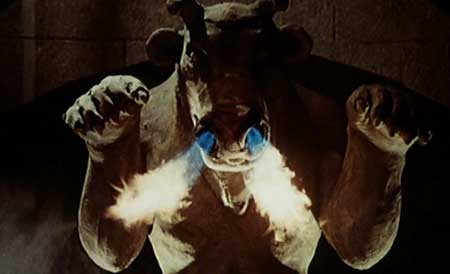 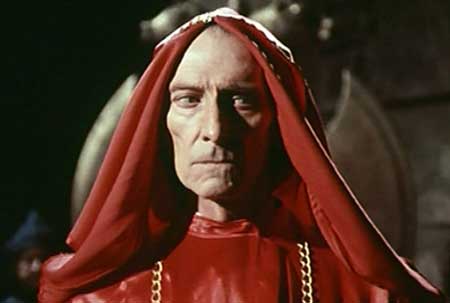 It’s been said that The Devil’s Men did nothing to maintain the iconic Peter Cushing’s image. Of course we all know that to even imply that anything could ever tarnish the real Van Helsing’s image is ridiculous. If anything the film helped to establish him as a force of evil much like White Zombie did for Bela Legosi. All in all The Devil’s Men is just a fun cult film that illustrates the time period in which it was made, which makes it silly in a way that any true horror fan can appreciate. Also, given the chemistry between Father Roche and his detective friend, there was plenty of opportunity for sequels involving God’s chosen priest taking on the most notorious of mythological cults. The could travel around in their magic Australian van and vanquish evil all over the world while picking up chicks that would be eventually sacrificed to a hydra or cyclops and jamming out to 70’s metal.