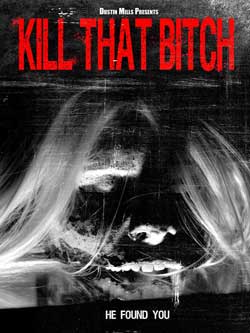 A masked man is mercilessly torturing and murdering women. But who is he? Why is he doing this and can he be stopped?

It’s no secret that I’m a big fan of Dustin Wayde Mills and his films, as a matter of fact I think the guy is something of a genius. In films like The Puppet Monster Massacre (2010), Zombie A-Hole (2012), Night Of The Tentacles (2013), Easter Casket (2013) & Skinless (2013) he’s proven himself to be a wizard at making no budget epics that are witty, exciting & laden with EFX that will truly blow your mind, especially when you realize that he does most of these films with budgets no bigger than $2500 most of the time. He’s a true talent and his future is exceedingly bright indeed. But eventually he was gonna make a film I didn’t much care for and (much to my chagrin) Kill That Bitch is the one. 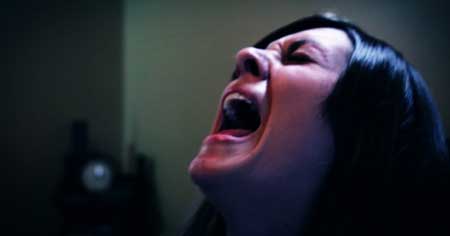 The story seems fairly ordinary at first but as the film progresses it gets a bit convoluted. The film opens with a silent scene of a girl with a mutilated face lying on the floor who crawls to her front door only to find a masked man standing there with a really big knife in his hand, it then fades to a nude woman making a call to a friend of hers making plans for the weekend. Once the call is over, the nude girl gets dressed & goes to the kitchen for a snack when receives a text message reading “I Found You”. After responding with “Who Is This?” she gets another text reading “Call Me“. Mistaking the caller for someone else she calls the number and she hears a phone ringing…in her bedroom, then the masked killer appears and sedates her. We next see her tied to a chair with her mouth taped up – the killer crouched down in front of her with that big knife. As he runs it across her upper leg he solemnly intones “This is gonna hurt“. Then he proceeds to cut a wide gash across her upper leg. And snip of her fingertips. And do some really unsightly stuff to her nose too… 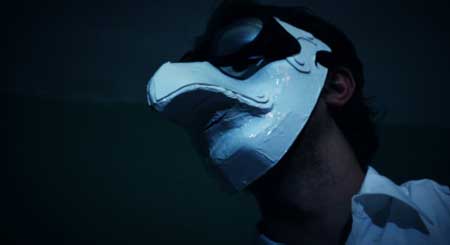 Cut to another nude woman in bed, receiving pictures of what he’s just done. Then cut to another woman lying naked in the forest, receiving the same pictures. Then cut to another woman (wearing a towel this time), receiving the same pictures as the others. But who are these women? What connection do they have with the victim and why are they all being targeted by a masked psycho? The script (written by Mills) takes its sweet time explaining all of this and while some suspense is usually welcome the film is only 68 minutes long so he doesn’t give himself much time to tie up all the loose ends. If you pay attention though, he does drop a few salient clues along the way but you have to really pay attention and he does his damnedest to lull his audience to sleep with a lot of slow motion scenes of women doing stuff like practicing self defense & dancing set to an acoustic version of “This Little Light Of Mine“. Two of the four remaining women get together to plan a defense against the killer but we’re still given no clue as to who’s after them or why they’re being targeted but we get the sense that they know who he is. But of course the killer gets to each & every one of them and in a few well choreographed fight scenes he eliminates them one at a time until it’s just him and the stereotypical “Final Girl“. But she has a secret too. And it’s a dilly… 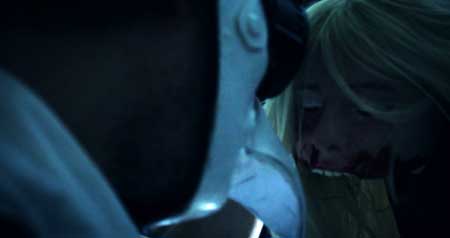 There’s a copious amount of nudity on display here but nudity is a running theme in all of Mills’ films so I had no problem with it but I’m guessing that a few of you might. There’s no sex in the film at all but there’s violence – a whole lot of violence. And it’s nearly all against women so if you have an issue with scenes featuring women being brutalized (in loving close up) by a masked lunatic with a sharp knife then stay far away. I daresay Mills screened all of the films in the Hostel series before he embarked on making this movie, it’s that violent. Some of you will label it as misogynistic but I’d disagree with that summation. The story he wrote demanded these scenes and let’s be honest here, most slasher films feature scenes of extreme violence towards women anyway. This doesn’t mean you need to slaughter women to make a good slasher film mind you but it is an accepted trope of the genre and has been since the dawn of movie making. What upset me a bit were the extremes the film’s makeup EFX take in showing the aftermath of the victims fates. The makeup is extremely effective & the sound effects he uses in conjunction with the murders are very effective. It all sounded so squishy & painful to me, so much so that I winced a few times at just listening to some of the torture scenes. But I’m sure that’s the effect that Mills was looking for anyway, mission accomplished sir. 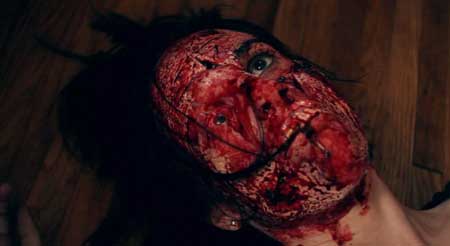 But all of this comes to what end? I’m not gonna spoil it for anyone but I truly thought the ending was so ridiculous that it negated nearly everything good about the film. Suffice it to say that it is unexpected & it surprised me completely. Doesn’t mean I liked it though, I thought it was really silly. And the film makes the egregious error of having one of those extended endings that continue on through the end credits and ultimately don’t make the film any better as all they do is leave the film open for a sequel. There’s a lot to like about Kill That Bitch, it looks really good, the score is effective, the fight choreography is unexpectedly smooth and the makeup EFX are grisly enough to make you wince. But the story meanders at times and ends up making a 68 minute film feel 90 minutes long. All actors involved perform adequately enough (Jessica Cook is especially good) but they’re overshadowed by the extreme violence & nudity on display.

In the end Kill That Bitch tries a bit too hard and that’s to its detriment. Its got its moments for sure and is another fine display of the wizardry of Dustin Mills but it’s the least of his films up to now in my opinion. Still, I can’t wait to see what he’s got coming up next, he’s gonna be a star one day!

Kill That Bitch is now available for purchase on DVD from Dustin Mills Productions. Go to dmpstudios.com for more information.