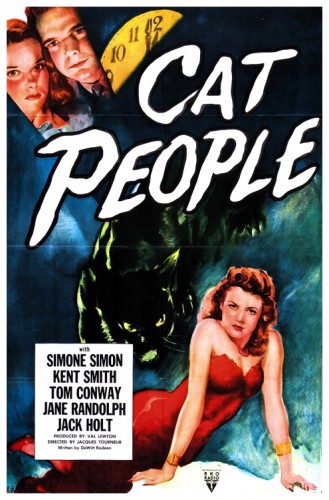 SYNOPSIS:
“When naval construction designer Oliver Reed sees Serbian-born beauty Irena Dubrovna at a zoo, he flirts with her, and soon they fall in love and marry. Complications arise because Irena believes she is the victim of an ancient Serbian curse that causes her to turn into a panther if a man tries to make love to her, and the marriage is not consummated. Oliver sends Irena for treatment with psychiatrist Doctor Louis Judd, and Oliver seeks ‘consolation’ with his colleague Alice Moore. Irena becomes jealous when she learns that she may be losing Oliver to Alice.” (courtesy IMDB)

REVIEW:
There were a few good but rather conventional genre films produced by commercial cinema in the forties, but there was, in the middle of that horror drought, one small oasis of the unusual: The low-budget low-key thrillers produced by Val Lewton for RKO Radio Pictures between 1942 and 1945, made by a small autonomous unit, saving money where possible by using little-known contract actors and already existing studio sets. The first thing to remember with all of Lewton’s horror films is that they reinforce the pattern already outlined in forties fantasy: Good taste, restraint and a certain staginess. The monster movies from Universal Studios were the exception to this pattern, and were a little more direct. The Wolf Man (1941), for example, reveals its rather slender horrors almost face-on but, for all the praise that has been lavished on Lewton’s films for their tactfulness, it is not for this reason they are remembered. Rather, it is a kind of breathless, claustrophobic, shadowy quality, a sense of impotence in the face of ill-defined menaces that may be purely subjective, but which nevertheless create a neurotic, high-strung tension and, finally, even terror.

In Cat People (1942), Simone Simon is perfectly cast as Irena Dubrovna, a sweet, lonely Serbian girl who works as an artist and fashion designer in New York (Lewton’s wartime women always had proper jobs). She meets and marries draughtsman Oliver (Kent Smith) but refuses to have sex with him because she fears the evil inside her will be orgasmically released and she’ll turn into a giant panther-like beast, just as it happened to her blasphemous fellow villagers in darker times. The sexual element is hinted at, rather than explained in so many words. Oliver considers her foolish for thinking she is cursed and has her see psychiatrist Doctor Judd (Tom Conway), who almost convinces her that she is a victim of her own fears and paranoia – but we see visual hints that she is indeed a cat. One fascinating image has Irena crouching at the bottom of her bedroom door like a cat in heat, while her sexually frustrated husband stands on the other side.

Like most other Lewton films, good and evil fight for control of his characters and, like his other tragic heroines (and psychologically disturbed male villains), Irena doesn’t have the willpower to reject her evil side. When she becomes jealous of Alice (Jane Randolph), whom the frustrated Oliver has turned to, she completely succumbs to her cat side. Although we eventually see cat shadows on the walls, cat prints in the snow and hear angry growls, the only time we actually see a giant cat is when Oliver and Alice are trapped in their office. Significantly, the shots were inserted by RKO as an afterthought, not by Lewton – nevertheless, the cat image could still be construed as only what the two frightened people imagine. Eventually Doctor Judd, while trying to seduce Irena, is attacked by a cat-creature. Before he dies of his injuries, he manages to wound the beast with a sword concealed in his walking stick. The film ends tragically with Irena releasing a panther from the zoo, which is immediately hit by a car, followed by Irena’s death.

Cat People is an atmospheric film containing several classic horror sequences: Doctor Judd’s attempt to seduce Irena only to be attacked by a giant cat; Terrified Alice senses herself being followed while walking through the park at night and a careful build-up of tension ends in what sounds to be the hiss of an attacking cat, but it is only the air-brakes of an approaching bus, on which she makes her escape; and the most famous sequence which has Alice swimming alone in an indoor pool when the lights go out – cat shadows appear and growling can be heard – and her robe is found torn to shreds, apparently by claws. Val Lewton, director Jacques Tourneur and editor Mark Robson all insisted the scene was their idea. Tourneur does a wonderful job of creating tense atmosphere, Simone Simon gives an erotic, sympathetic performance, and good character actors are everywhere, including Jack Holt, Alan Napier, Elizabeth Dunne, and Elizabeth Russell who actually looks cat-like. 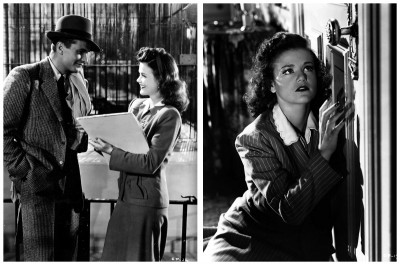 DeWitt Bodeen wrote the intelligent script, and cinematographer Nicholas Musuraca does wonders with light and shadows – the crisscross pattern over Irena’s door makes her apartment feel like a cage. This is a classic of its era, and perhaps should be watched on a double bill with Alfred Hitchcock‘s Marnie (1964) because of its strikingly similar sexual themes and plot elements. Fundamentally, all this is the lurid romanticism of a story from a pulp-magazine like Weird Tales, but much has been done to make it seem ‘artistic’ (the use of a painting by Francisco Goya and a poem by John Donne). The strength of the film lies in its symbolic representation of sexual repression, though the Freudian elements are a little too obtrusive, with phallic symbols like sword-canes and keys protruding randomly whenever Irena is around.

Cat People proved to be a big success at the box-office for RKO Radio Pictures, and Val Lewton accepted the assignment of producing a sequel with the more lurid title of The Curse Of The Cat People (1944), handing the reins to first-time director Robert Wise. The story follows on after Oliver and Alice get married, and Irena makes a rather ghostly appearance as the imaginary friend of the couple’s young daughter. There was also the infamous remake of Cat People (1982) directed by Paul Schrader starring Nastassia Kinski and Malcolm McDowell which, aside from a few famous set-pieces, is a totally different film. But that’s another story for another time. Right now I wish to invite you to join me next week with your morbid curiosity well-prepared for another step beyond the inner limits of the outer sanctum with a touch of evil from the amazing zone known as…Horror News! Toodles! 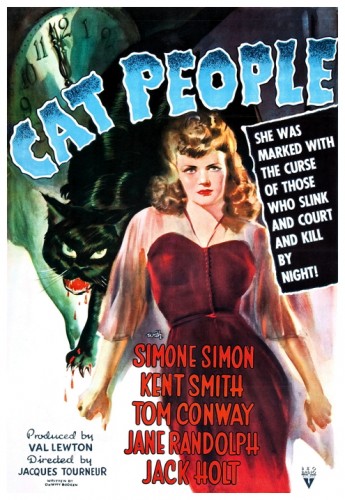