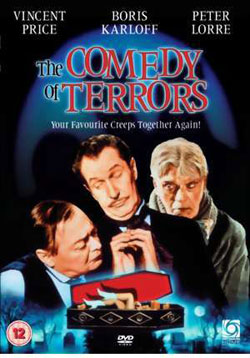 An undertaker who hasn’t had any ‘customers’ in a long time is forced the pay one year’s back-rent. To get money he starts to kill people in order to get new clients.

An undertaker who hasn’t had any ‘customers’ in a long time is forced the pay one year’s back-rent. To get money he starts to kill people in order to get new clients. Comedy of Terrors is great!! Everyone in it is great! I love seeing big stars (Vincent Price, Peter Lorre, Boris Karloff, Basil Rathbone) together like this. This is definitely one of my new favorites. The story is simple, nothing to figure out: just pure morbid fun at its best! 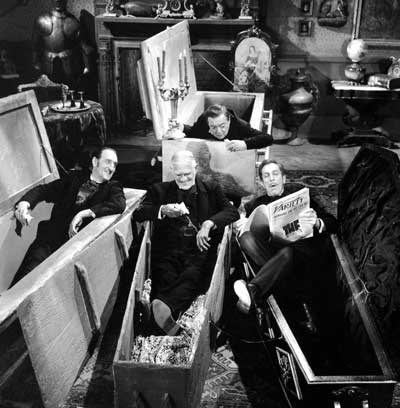 Vincent Price plays Waldo Trumbull, a despicable and greedy man who marries the gorgeous Amaryllis, in order to takeover her father’s undertaking business. Amaryllis’ father, Amos Hinchley, played by Boris Karloff, is senile and alcoholic so he’s obtuse to what is going on around him. Amaryllis, played by gorgeous Joyce Jameson, is a boisterous but sexy opera singer wannabe. Her husband constantly ridicules her about her singing and other stuff. Her singing is horrible but, if my wife looked like that, I wouldn’t leave her side!

Peter Lorre plays Felix Gillie, Price’s incompetent assistant who has a crush on Amaryllis and hates to see her being verbally abused by her husband. Basil Rathbone plays John F. Black, Esq., the owner of the building where Trumbull and the others live and work. He’s very prim-and-proper and… narcoleptic! He falls into a coma-like state at a moment’s notice for indeterminate periods of time. Narcolepsy + Undertakers + Back rent = well, you figure it out!) Great acting on everyone’s part. Boris Karloff was near his end so he doesn’t walk around much here. He was chosen to play John Black but was replaced by Basil Rathbone because it required a bit of activity. But Karloff is great nonetheless, as the nice old grandfatherly type. 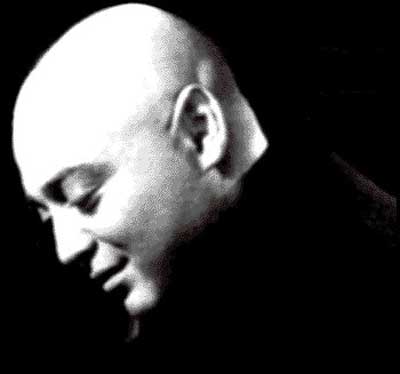 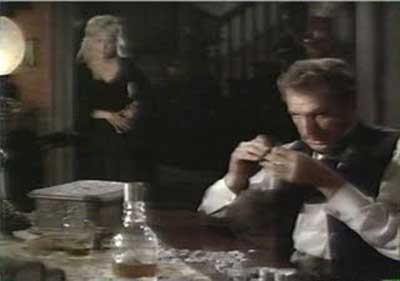 There’s not much SFX to worry about. No blood I can see. It’s more character-driven and dependent on the hilariously morbid dialogue and character interaction. Sounds boring? Well, this is one of those “you just have to see it to get it” type of films. Based on the packaging description, I wasn’t in a rush to see this one but, after five minutes into it, I was glued to the screen! Not much else to say. Simply put, this is a MUST SEE film for horror fans! Fans of other genres will love it as well, as long as they aren’t completely and anally serious about death and funerals. 5/5

Quotes:
[Trumbull and Gillie trying to close the coffin while Black tries to get out]
Trumbull: I’ve never had such an uncooperative customer in my whole life. Trumbull: I’m afraid we’re just gonna have to buy another casket and after having used this one for only 13 years.
Gillie: Only 13 years?
Trumbull: You know, I wonder what idiot ever thought of putting bodies in a crypt?
Gillie: Yeah, and they fertilize plants too.
Trumbull: What a terrible thing to say, shut up.