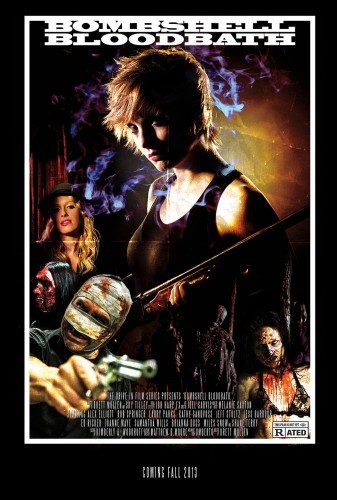 Doctor Carter risks everything with each step he takes in resurrecting his recently deceased wife as he infuses his formula, Injection C-900, into the corpses stolen from the local graveyard. Every attempt only succeeds in creating hungry, flesh-eating zombies, driving the doctor closer to madness with every failure. After his daughter, Cara, tragically contracts the virus during a scientific experiment gone horribly wrong, she and her sister must take extreme measures to secure more anti-serum needed to prevent her from becoming an undead ghoul.

Bombshell Bloodbath is gory, gooey, goofy fun, an absolute blast! It draws its inspiration from the films of Argento and Fulci with a dash of Southern U.S. charm. Director Brett Mullen sets out to impress with his cinematography, camera blocking and pacing. While the results are not entirely perfect, it stumbles over itself struggling with its budget limitations and a wandering plot, the film illustrates what pure imagination and an undeniable talent can produce. The film not only oozes with terrific low-budget effects that will put a smile on any horror fan’s face but it also has an obvious love for film and the genre. The film has a distinct 70’s and 80’s Italian flavor to it with its combination of signature color choices, use of shadows, wacky monologuing characters and the inclusion of a music score provided by the musician Umberto. The cast brings it as well, including their North Carolina roots, with a number of actors standing out: Rob Springer as Doctor Carter, the bandaged, deranged scientist with his purposeful, direct delivery; Alexander Elliott as Carter’s troubled daughter, Cara; and, especially, Larry Parks as Sheriff Parks who provides the film with its funniest lines – a real treat. Bombshell Bloodbath is only a hint, an early indication, of what director Brett Mullen promises to bring to the genre. 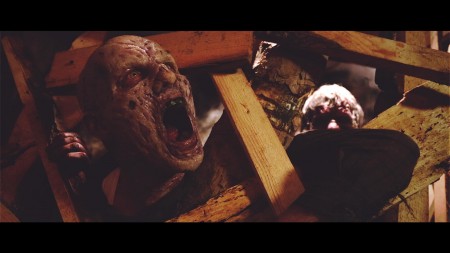 Allow me to take you back to February 21, 2014, where I was fortunate to join a full house in Greensboro, North Carolina to catch the premiere of Brett Mullen’s Bombshell Bloodbath. The theater is packed with the cast, crew members, media and close friends – an enthusiastic, supportive crowd to be sure. The energy is palatable, a tangible beast in the air. You can almost reach up and touch it. The excitement, which is well-deserved and earned, fuels the screening, the crowd roars at the right parts, gasps and giggles at the practical special effects and applauds at the end credits. These screenings are always a monumentally fantastic event and Bombshell Bloodbath is one of the best. The film is energetic and original (even with it’s heavy influences), a breath of fresh air for independent film and well worth seeking out and watching. In a time when the theaters are full of remakes, retreads, sequels and PG-13 humdrum, it is films like Bombshell Bloodbath, and film makers like Brett Mullen, that keep hope for the future of horror alive. 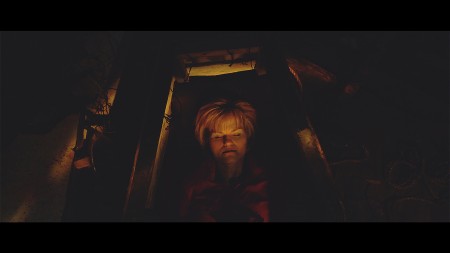 Bombshell Bloodbath, like most independent films, is not without its flaws. There are times the movie wears its low budget, home grown roots on its sleeve, but those scenes are thankfully rare. In many cases, the locations and actors are an interesting juxtaposition against the stronger sets where the tone and cinematography are much stronger. These elements are likely to bring a sense of identity or charm to many viewers, but for some, it may cause an irk or cringe. The script and story is a bit distracting, shifting focus from the mad doctor to his daughter and back again making the narrative a little confusing. But, that is a common trait with the films that influence the visuals of the film. Bombshell Bloodbath is far easier to follow than Fulci’s The Gates of Hell for example, but shares its multi-plot structure. While most of the effects are extraordinary for this film, the quality of work is inconsistent throughout making the lesser successful ones stand out more. By the end credits, however, these criticisms are little more than nitpicking, some of the flaws may very well be intentional, others are only an issue due to comparison to other far superior scenes in the film, and, as a whole, they even provide the film with a unique quality that it – and the audience – can easily embrace. 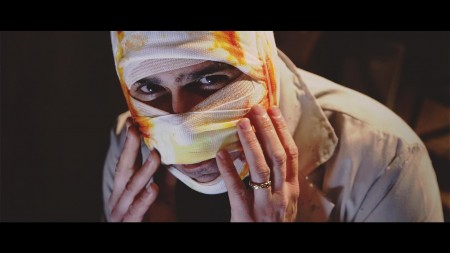 For an independent feature, Bombshell Bloodbath is ripe with a large, rich cast of characters, a mad doctor and his staff, his troubled wife and family, a sheriff and his deputies, a fellow scientist and his girlfriend and his neighbor, a couple that stumbles upon the horror, a Buck character straight from a Quentin Tarantino film and a gang of redneck zombie hunters. Ambitious. The film’s leads are incredibly strong; Rob Springer plays Doctor Carter and Alexander Elliott portrays his daughter, Cara. These two anchor the film and are extraordinary. Doctor Carter is ripped straight out of a Fulci film, a role that would have been filled by Christopher George back in the day. Springer delivers his line with a mix of quiet storm and calm histrionics, he is a ticking bomb of madness. Confined to his lab and wrapped in bandages, Doctor Carter is a terrific visual brought to wonderful life by Springer in the best Frankenstein, mad scientist, way possible. Alexander Elliott, on the other hands, is more akin to the leads found in Dario Argento films. She is visually arresting, she has a unique look that is captivating and fitting for the role. She starts off an innocent pixie only to be transformed into a tornado, a dangerous storm blowing across the valley, in the hands of Mullen. It is not long before she steals the film from Springer and takes the lead. Making the most out of his supporting role as Sheriff Parks, actor Larry Parks is a true highlight in the film. He takes what could have been a stereotypical cop role and gives the character a charm and a welcomed sense of humor. Terrific! 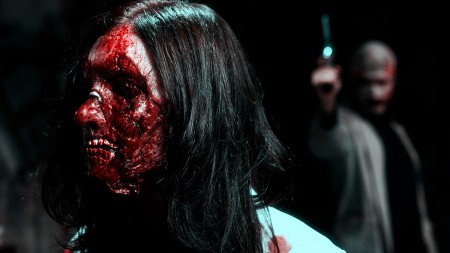 Bombshell Bloodbath contains a one-two-three punch. The first is the brilliant special effects provided by Joh Harp FX out of High Point, North Carolina. Known locally as providing effects for stage and haunted attractions, the duo of Joh Harp and Anber Michael are beginning to make a name for themselves as effects artist in film as well. With Bombshell Bloodbath, there is no doubt that they are set to color screens deep dark red in the future. Their effects in the film are wondrous, a delight, gory, gruesome. Their zombies are brilliant, familiar but signature to their own design, especially within the budget. They truly stand out in the confines of Doctor Carter’s lab lit by Mullen’s camera. There a number of well-conceived gags as well including a decapitation by shovel, a gun shot to the face (that should not have worked, but somehow does) and a nice homage to Day of the Dead. The film is filled with memorable visuals illustrating what passion for film, for horror, combined with true talent can provide. Jon Harp FX brings the goods. 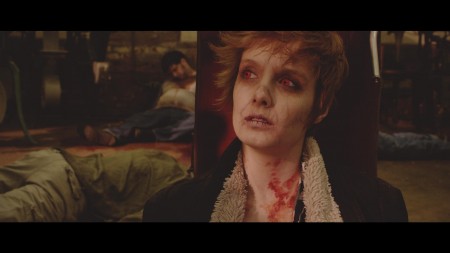 The second strength to Bombshell Bloodbath is the score provided by the musician, Umberto (Matt Hill). The music is heavily influenced by Claudio Simonetti, Goblin, Fabio Frizzi and a little John Carpenter to boot. The score is impressive. The music is haunting and driving. It feels lifted directly out of the Italian classics and flavors the film in a precise, rich flavor augmenting perfectly the tone and visuals of director Brett Mullen. It is a perfect marriage of visuals and sound. 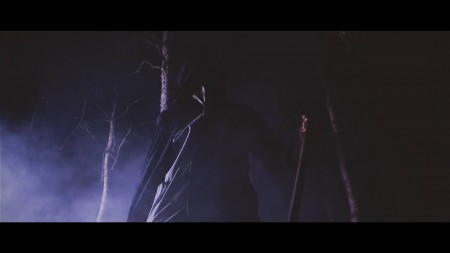 The third, and most important, strength is Bombshell Bloodbath‘s director Brett Mullen. He displays a style and eye for film that is instantly captivating. He is a diamond in the rough to coin a familiar phrase. This film instantly feels like an early indicator of great things to come. There a more than a few shoots that are nothing short of extraordinary, simple in their design but smart in their execution, made with an attention to tone and detail not often seen in early work. Opening shots of approaching vehicles are shot from above following the car from a bird’s eye view. Closeups are shot with the actors stepping into view, one with the mad doctor covered in bloodied bandages is almost intimidating. Most all the shots in the lab with the zombies are expertly lit and photographed. Another impressive scene has Argentio-influenced color dancing off the actors set in antique automobile. Brett Mullen is a promising young film maker that has instantly proven worth keeping an eye on. The future is his for the taking. 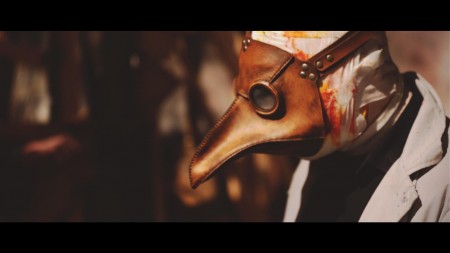 Quoting an audience member on her way out of the North Carolina screening, “Bombshell Bloodbath is zombies done right!” She is not wrong especially if you love films like Zombie, The Living Dead at Manchester Morgue or, even, Dawn of the Dead. The film is a brilliant mix of Italian zombie films, grass-roots southern film making (and charm) and early Quentin Tarantino sensibilities. The film rises above its low budget due to great effects from Joh Harp FX, a terrific score from Umberto (Matt Hill) and the stylized directorial efforts of Brett Mullen. Much of the acting is superb for an early low budget efforts as well with Rob Springer, Alexander Elliott and Larry Parks standing out as Doctor Carter, Cara and Sheriff Parks. Bombshell Bloodbath is fun and a great time, a refreshing, visual treat. 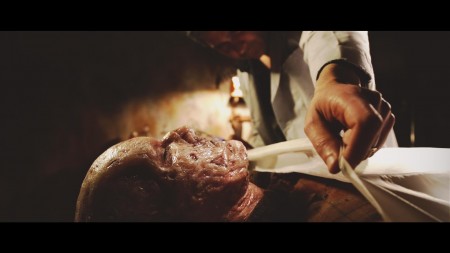 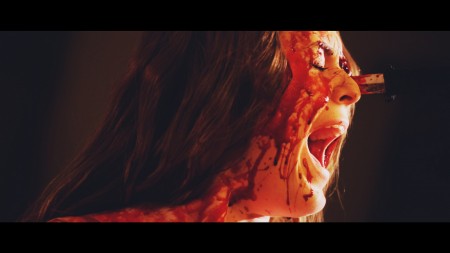 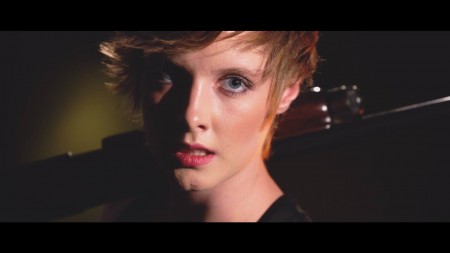 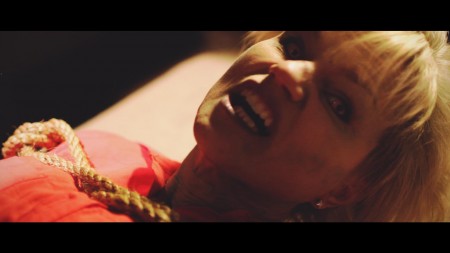