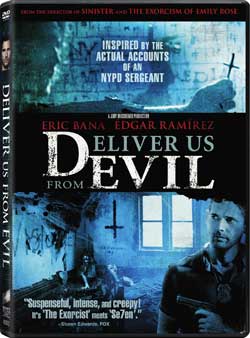 New York police officer Ralph Sarchie investigates a series of crimes. He joins forces with an unconventional priest, schooled in the rites of exorcism, to combat the possessions that are terrorizing their city.

Deliver Us from Evil is a book-turned movie based on the alleged real life accounts of Ralph Sarchie (played by Eric Bana), a former NYPD Sergeant who allegedly witnessed demon possessions and other freaky-ass shit during his stint as a boy in blue… Allegedly.

The film kicks off in typical hook fashion with three soldiers in combat. They reach an underground cave and upon entering something freaky happens which cuts out their helmet recordings and teases us to the unknown cause… It’s demons. 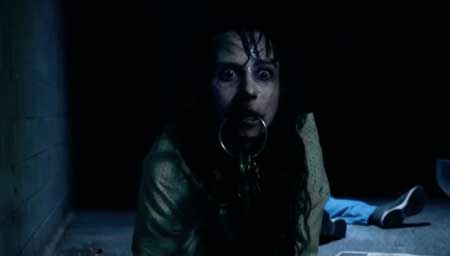 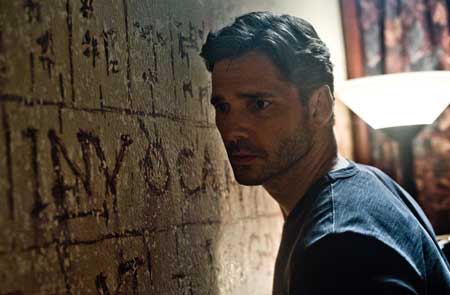 We shift to Sarchie and his wise-ass partner, Butler (Joel McHale) on a routine night, well, if you count dead babies in an alley routine… We learn that Sarchie has a “radar”, an innate ability to sense trouble (which we later find out is the ability to sense all things occult too,) and when he chooses to take the call of a standard domestic disturbance, something below his usual case level, his spider sense is tingling, and for good reason.

What follows are a handful of seemingly disparate cases which grow increasingly odd and unexplainable. Sarchie, with his rational-thinking quickly being turned upside down, enlists the help of Father Mendoza (Édgar Ramírez), a former drug abusing, womanizing man-slut turned priest. The unlikely duo discover that the cases are linked and tied to the night those three soldiers uncovered the underground cave. With Sarchie’s own family now in harm’s way, they must defeat the demon behind all this before a gateway to evil is opened.

The story is essentially a vanilla police procedural with a dollop of vanilla horror and music from The Doors. You know the drill, loud sounds (lots of), jump scares, guttural voices and crucified cats. We have your typical troubled detective in Sarchie, his typical wife (Olivia Munn) who just wishes her husband wasn’t married to his job, the typical innocent child just waiting to be haunted and/or possessed and a typical priest with his own typical inner demons to battle. It does blend these components well, though on a whole it’s still very been there, done that. 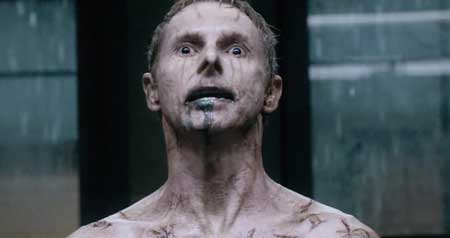 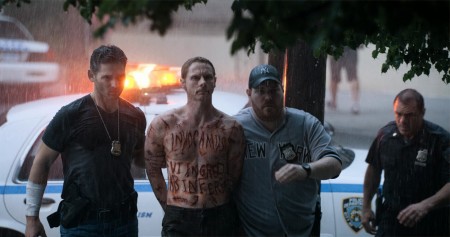 The exorcism in Act 3 is pretty standard too, with your typical bit with the priest falling for the very thing he tells the other participants (Sarchie) not to fall for. Fortunately this is handled very quickly. I appreciated the change from the norm by having the story based around a police procedural and even the exorcism is performed in a police interrogation room, though no one really came to see what the hell was going on once the demonic voices, exploding glass and general ruckus began.

There was the most blatantly delivered exposition I’ve ever witnessed in film without it purposely being done. Not even Basil Exposition was this blatant. I’m paraphrasing, but basically it was “Hey, aren’t you Sarchie, the guy who arrested Marvin the Molester?” Fortunately it occurred only once but even this one time almost made me hurl my remote at the screen in disgust. A professional movie like this shouldn’t have such blatant exposition.

I found the story to be rather odd. Essentially the possessed ring leader writes arcane words on walls to possess other people, but then he goes back and paints over them… Why doesn’t he just leave the words up to try and possess as many people as possible? It all seems inefficient to me. He needs to take a marketing class… Or use Facebook.

Though this tries to be a mystery, you know it’s tied to the soldiers and demons, so there is essentially no mystery to figure out. You’re just watching Sarchie go about his business. Not a bad thing, but don’t come into this movie expecting Hitchcock-esque shenanigans. 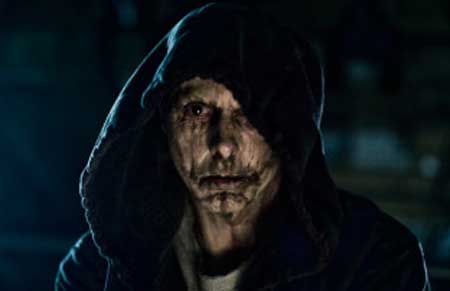 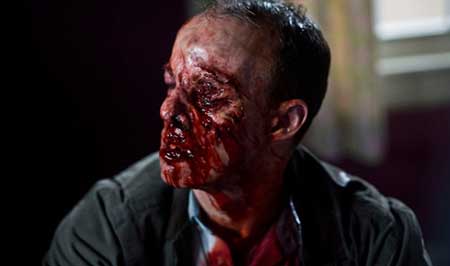 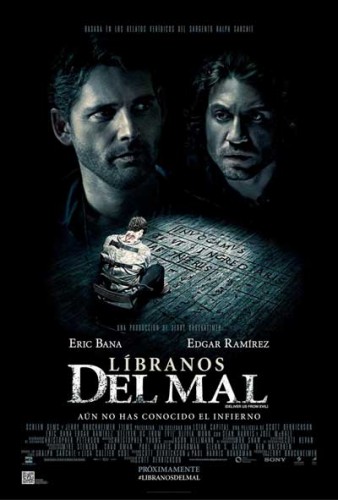 Makeup effects were damn good. The possessed and “evil” people looked sickly and malevolent. I was very impressed by the effort and it was, for me, the best part of the film. The atmosphere during Deliver Us from Evil was dark, foreboding and never let up. It gave you a nice sense of dread. It was not a happy movie, no matter how many smart-arse quips Sarchie’s partner said.

My fellow countryman, Eric Bana does a very good job playing Sarchie, showing that he still has the chops to play a leading character. His American accent is getting better too! He easily emoted the broody emotional ranges required during the film and dialog was delivered believably. Édgar Ramírez was also solid in his performance as the hot priest.

Deliver Us from Evil is a mildly entertaining exorcism film which deviates from the typical setup by having a police procedural in the mix. Very reminiscent of Hellraiser: Inferno, which was also written and directed by Scott. There are other exorcism-based movies that are more entertaining in terms of the demonic and exorcism components, but if this ends up on your screen for some reason, give it a go. You can do a lot worse than watching this film.