Home | Is It Possible To Scare Daryl Dixon? Watch And Find Out

THE WALKING DEAD folks are over in Tokyo promoting the start of Season Four and they decided to have a little fun at the expense of show star Norman Reedus who of course plays fan favorite Daryl Dixon.

The press release to came with the video explains things perfectly so read on and then enjoy the show!

FOX, leading international entertainment pay-TV network and broadcaster of “The Walking Dead” in 125 countries outside the USA, launched its social media driven “#getFOXed” campaign in Tokyo today. Designed to identify super fans of its global hit shows by creating unmatched fan experiences, the campaign kicked off with the Ultimate Zombie Prank on Norman Reedus.

“The Walking Dead” fan and Vine “Zombie Prankster” Nick Santonastasso, who has more than 534,000 followers, was flown to Tokyo, Japan where he was transformed into a walker by the show’s Special Effects guru, Greg Nicotero. Andrew Lincoln (Rick Grimes), Nick’s co-conspirator, manned the control room giving the final go ahead, while hidden cameras captured every angle of Nick’s big scare on Norman Reedus (Daryl). Nick’s prank was a follow up to his existing 2-part viral “Zombie Prank” Vine series:


17-year old Nick, was born with a rare syndrome called Hanhart and has only one arm and no legs. His determination and infectious zest for life have enabled him to overcome countless obstacles and he has now become an inspiration for many kids and adults. Because of his outspoken love for “The Walking Dead,” Nick was the perfect fan to launch the “#getFOXed” campaign.

Don’t miss the global return of “The Walking Dead” across FOX channels outside of the USA on February 10th. Check local listings for exact times. 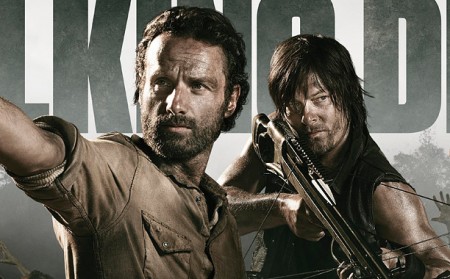